Wednesday's online note and Thursday's front page article on the proposed path at the Kroc Center have brought out the usual cries of "no tax-payer-funded frivolities," but even if you think a path would be a boondoggle, it wouldn't exactly be funded by taxes - the proposal on the table is to use ConnectOregonV funds, so would it be ok if funded by video poker, lottery, and scratch-off tickets?

And more interestingly, what would the Kroc Center think?

Here's what the Salvation Army has to say on gambling:


The Salvation Army is opposed to gambling. The nature of gambling lends itself to exploitative, deceptive and manipulative practices. It is contrary to Christian principles of love, freedom from oppression and concern for others.

As such it should not be a means of income generation or economic development, whether by government agencies, charitable organisations, churches or commercial interests....

Gambling is becoming increasingly common and accessible, often promoted and enabled by governments. Gambling may be large and sophisticated – such as lotteries, casinos, slot machines, online gambling or sports betting – or small and loosely organised informal games of chance. 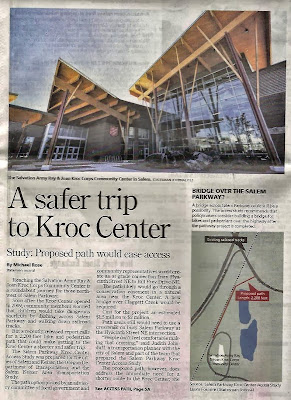 And what kind of public investment in infrastructure is appropriate for a what is, in addition to being a youth center, a church enterprise, a high-gloss Mission of the Salvation Army?

(The question isn't exactly fair.  The centers are an odd private-public benefaction, and questions that might look like rhetorical or leading ones with an "obvious" answer are often more complicated.  So, yes, these are sincere questions.)

Though the question is not charitable, it is worth asking: Should the City of Salem be undertaking projects for the benefit of Keizer residents? If so, should Salem ask for something from Keizer?

The key here is that Keizer's existence and incorporation was fundamentally premised on a rejection of Salem and the prospect of annexation and the associated taxation and benefits.  Only in this light it is reasonable to ask whether Salem should undertake a project for Keizer. Because of course if we think access to the Kroc Center is a valuable thing, a good thing, we should should want to make sure it is available equally to all.  But maybe Keizer should help out a little?...The inter-city politics are interesting.

Finally, it's more than a little odd to read the neutered language here:

The main problem isn't that "people don't feel comfortable," the problem is that the parkway isn't safe for kids and few parents in their right mind would send kids on their own to cross the parkway!  (The only people, including adults, who feel totally "comfortable" making that crossing are lunatics, numb to danger!  Crossing the parkway is always being alert to danger.)

Maybe City Staff can't make a stronger statement without damning the City for the dumb siting decision - but it seems like it puts the burden on people for complaining without reason, for an overwrought and subjective desire for comfort as opposed to an objective standard of safety. (Maybe this is a reportorial decision, however.)

And over at N3B, advocates point out some of the irony that SKATS is in favor of an expensive giant bridge and highway over the river for people in cars, but is not in favor of a foot bridge across the parkway for kids because it would be expensive.

By siting the Kroc Center in an industrial wasteland, and with the Salvation Army's acceptance of that, the City of Salem and Kroc Center have brought on themselves a bunch of difficulties, and it's not clear that remedying these should be the City's highest priority.

(For more on the Kroc Center and the history of the path proposal, see notes here.)
Posted by Salem Breakfast on Bikes at 7:00 AM

I don't believe SKATS has reached a consensus on the bridge yet. I think council will face strong pressure from other SKATS members to sign on to 4D.

As I've said many times, N3B accusing others of being duplicitous or inconsistent is, well, duplicitous! Scott has called for better bikes lanes in his elevator speech but N3B has been silent on the mobility study recommendations to improve access to the Union St. Bridge. They said we need more compact development in the core, but have been silent on the most significant housing opportunity downtown that we are likely to see for the next 10 (20?) years. They called for "low cost and no cost alternatives to relieve peak hour bridge congestion" but most of their members successfully campaigned to ban parking management from the heart to our transportation network. A move that also defunds better bike lanes and more compact development downtown.

The Kroc Center is not just a "church enterprise." It's a church (http://kroc.salvationarmysalem.org/church/)! Seems likely to raise eyebrows on the Connect Oregon grant selection committee. There is a 20% cash match required and Salem is putting nothing in. The match would come from Federal funds controlled by SKATS. You are right that Keizer is contributing nothing but staff time, like Salem. Seems like this won't be a very competitive proposal. Everyone may just be going through the motions here.

There is also a collector planned to extend Salem Industrial to Hyacinth that is already in the TSP. It will have bike lanes and sidewalks and provide the same connectivity and service that this path will.

Thanks, Jim. I was unaware just how centrally the Kroc Center sees itself as a church rather than a community center that happens to be operated by a church. On the "about us" page, the first item in the "Kroc Center’s Mission-Driven Principles of Operation" is about preaching the gospel: "Plan, operate, and develop in a manner consistent with the mission of The Salvation Army: to preach the gospel of Jesus Christ and to meet human needs in His name without discrimination."

Thanks also, Curt, for underlining the fact that the project has to be outside of the road right-of-way and not eligible for gas tax moneys. I should have included that background.