Another Congestion Story Misses on Carbon, Crashes, and Compliance

Crank up the "carmaggedon" and "cost of congestion" memes! 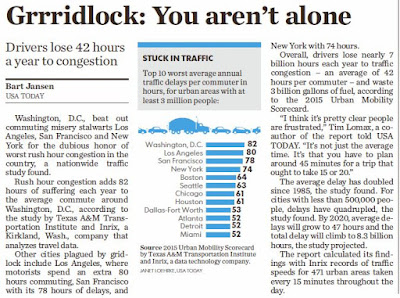 The AP - and doubtless other services - have churned the latest press release from the autoist and highway lobby:


More jobs and cheaper gasoline come with a big, honking downside: U.S. roads are more clogged than ever now that the recession is in the rearview mirror.

Commuters in Washington, D.C., suffer the most, losing an average of 82 hours a year to rush-hour slowdowns, a new study finds. Los Angeles, San Francisco and New York come next on the list of urban areas with the longest delays.

But the pain reaches across the nation.

Overall, American motorists are stuck in traffic about 5 percent more than they were in 2007, the pre-recession peak, says the report from the Texas A&M Transportation Institute and INRIX Inc., which analyzes traffic data....

Over at the City Observatory, they've got a handy critique, "Questioning Congestion Costs." One of the slides has an especially damning methodological point:


The way the travel time index is used to compute “costs” is to compare what are called “free flow” speeds with the actual speed on the roadway system.

The baseline assumption used by the travel time index–that any reduction in speed from free flow levels on the roadway system represents a “cost” is simply wrong. Free flow travel speeds on many roads exceed the posted speed limit, and so the travel time index methodology can compute a cost associated with the time lost to travelers who cannot exceed the speed limit. Todd Litman estimates that a significant fraction of what is labeled congestion costs is actually compliance with posted speed limits.

Somewhere between a quarter to half of estimated congestion costs represent speed compliance. In more congested cities like Los Angeles and Miami, a majority of all time losses attributed to congestion involve slowing down to the posted speed limit. [italics added]

Slowing in order to comply with the lawful speed limit is counted as "congestion." That's messed up, and a terrible instance of padding the results. But counting anything less than free-flow as a fault is the essence of hydraulic autoism!

Maybe this latest study's different, but it would be surprising. Be very wary of its claims.

It also, as was the case with the story in June, completely misses the ball with carbon pollution and climate change. Even if driving were an unalloyed social and economic good, there are still reasons to cut down on it because of climate change. Greenhouse gas emissions have to be accounted for in any argument for increasing free-flowing traffic, and they cancel the case.

Additionally, we should also consider safety, and crashes cost far more than congestion.

A complete accounting of driving and congestion suggests that the best way to solve the problem is with systems that make it easy to drive less.
Posted by Salem Breakfast on Bikes at 7:00 AM

image edit: swapped in the clip from usa today in the SJ

Part of the problem is Americans unwillingness to live close to where they work. There would be no need for a 20-30 minute commute if people lived within walking or cycling distance of their job.

And a large part of that is poor urban planning with residential areas being quite distant from commercial and industrial zones.

Here's a specific critique of this report:

"The marginal increase in congestion in 2014 is certainly worth noting, but where things get really interesting is when TTI attempts to forecast the impacts of congestion in the future by simply pretending that the last decade didn’t happen, basing its projection instead on trends that prevailed from 2000 to 2005 (the years highlighted in red in the chart above).

The authors explain it this way: “The period before the economic recession (from 2000 to 2005) was used as the indicator of the effect of growth. These years had generally steady economic growth in most U.S. urban regions; these years are assumed to be the best indicator of the future level of investment in solutions and the resulting increase in congestion for each urban area.”

It’s hard to be diplomatic about how wrongheaded this is. The period TTI uses as its best guess of what is likely to happen over the next five years 1) ended a decade ago; 2) was characterized by consistent economic growth that was 3) driven in large part by a massive speculative exurban housing bubble; 4) predated the smartphone, Uber and even (until 2004) Facebook; and occurred 5) during a time when the Highway Trust Fund was still solvent. If you want to argue that gas prices will remain low and the economy reasonably robust forever, fine. But it’s not legitimate to simply assume that America will magically be whisked back to 2002 again."

And if you didn't see it, City Observatory has a new post about this report and links to other critiques -
http://cityobservatory.org/another-tall-tale-from-the-texas-transportation-institute/

Thanks for the links!

The Puget Sound Business Journal has a piece on INRIX (whose data the TTI study uses) and an aquisition of a parking company:

"Kirkland data company Inrix is working to move beyond traffic data with its latest acquisition of real-time parking app ParkMe, a Santa Monica-based company that provides information on parking lots and metered spots.

Inrix collects data through systems embedded in many new cars. The information feeds into the company’s big data system, which crunches the numbers and provides drivers with traffic updates. Many car companies, including BMW and Porsche, use the company’s traffic data for in-car dashboard systems.

The company earlier this year announced plans to begin monitoring parking information. Now, Inrix says it will be able to provide more comprehensive parking services, including finding and paying for parking from a smartphone or vehicle."