Getting to the Fair, Crash on Lancaster, Lottery Dollars - Newsbits

The State Fair started yesterday, and the new quasi-public corporation thingy operating it doesn't seem to have focused much on transportation this year.

Parking is $5, and there's no published information on a Cherriots shuttle or bike corral. It may be, in fact, that there is only the dinky bike rack indicated by the map off of 17th Street. 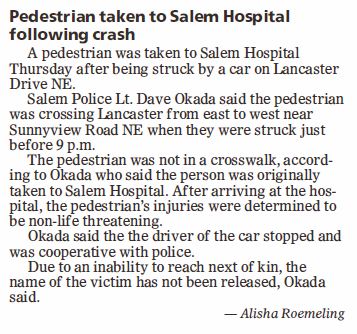 Last night a driver struck a person on foot trying to cross the canyon we call "Lancaster." (Note the reversion to the passive voice, abstracted "pedestrian," and driverless car!)

It's very stroady here, and signalized crosswalks are far and few between. Crossing "legally" requires a great deal of added and out-of-direction travel, and it is not surprising that people should try to cross outside of marked or unmarked crosswalks.

Speeds on Lancaster are also too high.

Middle Commercial is similar to Lancaster in several ways, and this crash underscores the usefulness of the projects arising out of the Commercial Vista Corridor Study.

Unfortunately, because of the fragmented jurisdiction on Lancaster, shared between the City and County, doing the same there will be more difficult. The neighborhoods adjoining middle Commercial here are also very different from the neighborhoods along Lancaster, and there may be very real equity issues in play.

Did you see the story about "cash-cow 'delis' that might be operating illegally as casinos"? The Secretary of State released an audit that found a worrisome lack of controls over the way some lottery outlets were operating.


The audit from the Secretary of State's Office, released Thursday, brings to light an open secret long lamented by reformers who worry that the lottery's billion-dollar returns come at the expense of problem gamblers.

So-called "limited menu" purveyors — which pair wall-to-wall video gambling with cigarettes and bare-bones food options such as microwave burritos — have been free to flout state rules meant to keep retailers from earning more than half their sales from gambling, the audit found.

This has been at the center of the Portland Bicycle Transportation Alliance's statewide funding advocacy at the Legislature (see testimony from this year here), but the realities of funding things from lottery and video poker dollars are more than a little icky.

The South Salem Transit Center will be in part funded by these monies. Elsewhere, Eugene in particular cleaned up with funding for some terrific projects.

But these are not funding sources about which we should feel very proud. We really need to rethink funding transportation, and gas taxes and carbon taxes should be at the center of it.
Posted by Salem Breakfast on Bikes at 9:30 AM

Lancaster Drive is a disaster! As chair of East Lancaster Neighborhood Association I worked on the Lancaster Study back in the late 1990s. Interesting that the City only published 3 copies of the findings, but they use it as the blue print for all major arterials since. Basic findings were that access needs to be collated, turns controlled and points of conflict reduced. Some of the things that you see recommended are the islands and raised curbs to control lanes and turning ( they probably have a more official name).

The problems with Lancaster are too numerous to list, but we keep letting developers build problems and then spend millions of tax dollars to fix them. I am not sure how to retrofit bad situation like Lancaster, South Commercial or Wallace Road so that people pedestrians can be safer.

We do know how to retrofit them! Some version of a multi-way boulevard. In cross-section:

See the third picture in this post for one version of this. The "Stroad to Boulevard" tumblr has many other examples of similar boulevard treatments.