Council meets on Monday, and there's a few transportation things of interest on the agenda.

Perhaps the most interesting is a willful silence on the impacts of the proposed Third Bridge.

Over at N3B they point out that the City's got a misleading report on a subdivision and potential hazards to it.

At the last Council meeting, a citizen asked why a geological assessment wasn't done for the River Valley Subdivision. Apparently the prospect of a new 60-unit apartment complex next to existing single-family homes raised the question.

The landslide risk appears to be in a borderline, middle zone where reasonable people can disagree. (And perhaps a minor administrative mistake was made as well.)

Much more interesting is the final statement in the Staff Report, which is simply delicious with tart irony.


There is no reason to believe that there is any danger associated with the homes in the River Valley Subdivision.

Well, this is plainly false!

On the map of the Salem Alternative, you can see how Hope Avenue, Marine Drive, and the bridge approach run right through the south edge and several homes of the "subject area" in the City Staff Report. 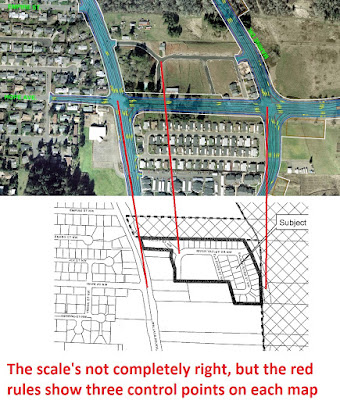 How is that not a danger to the homes?!

If the City honestly plans to build this thing, then they need to stop approving buildings that will need to be demolished. Not to do so is wasteful and callous.

The proposed Transportation Network Company ordinance (read: Uber) was continued and will be taken up again. Some additional compromises have been negotiated, but some sticking points remain:
The idea of Uber sounds great, and there is no question that the way the taxi market has evolved there are problems and inefficiencies to solve. At the same time, the ride-booking companies have sought too much of a laissez-faire market, and the potential down side of that looks all too 19th century in some ways. There's surely a fertile middle ground of compromise, but we may not be there yet, and it seems like this is a good place for Salem to remain conservative and to follow developments in other cities rather than to try to lead. From a city-wide transportation policy side, as distinct from the interests of particular individuals who might already have booked satisfactory rides in Salem, I'm not seeing a great advantage to the ride-booking companies yet.

One opportunity that Walker raised over at LoveSalem seems like it might yet be worth more attention. Our transit district, Cherriots, might be better suited to regulate and administer the operations of ride-hailing businesses. There has been recent talk about Uber moving to some fixed stop routes. Cherriots' current consultant Jarrett Walker devoted a piece to it:


Uber is now testing a feature they are calling "Suggested Pickup Points"....

You may be familiar with an identical concept in the public transit industry, called a "stop" or "station" -- a location near to destinations, but maybe not at their front door, that is cost-effective for a transit vehicle to reach. This saves the driver the time it takes to drive to the precise preferred location of each passenger, which is especially crucial if there are other passengers on board whose travel time is also valuable. (It also encourages a bit of walking where that's easy to do, which is good for you!)

This new feature illustrates how a demand-responsive service like UberPool can evolve to resemble the very fixed route bus that it often pretends to be supplanting, particularly when serving high-volume markets. Discounts for walking to a pickup point make perfect sense, for the same reason that fixed route transit should be even cheaper; the customer is taking on inconvenience in return for a more efficient transit service.

The one place in Salem where this all dovetails neatly is the new experiment with "flexible transit" in West Salem. What if "The Connector" service morphed into a partnership with Uber? That seems like an experiment worth conducting, but it may be too late now for this.

There's also a report on an intergovernmental agreement with the School District to control access at this nearly secret underpass connecting Parrish and North across the railroad.


Salem-Keizer School District has requested the existing undercrossing be closed when not needed for school purposes to reduce vagrancy, graffiti, and vandalism; and limit access to School District property after hours. City staff had similar concerns and met with representatives of UPRR, Oregon Department of Transportation-Rail Division (ODOT-Rail), and the School District on October 8, 2014, to develop a proposed course of action to provide for scheduled closures of the undercrossing.

So more fencing is going to go up and the School District will keep it locked outside of school hours.

The undercrossing shows problems with undercrossings generally: They lack eyes and ears on them and so they become attractive nuisances.

At the same time, the distance between the existing at-grade crossings of Marion Street and D Street is long, and it would be very nice to have this grade-separated crossing of the railroad for people on foot and on bike. (It's also a WPA-era structure that deserves attention on those grounds alone.)

There's a resolution to initiate amendments to the Transportation System Plan. The Staff Report says "the currently proposed amendments primarily address housekeeping matters," but there's a little bit of a stinger in them. Part of the "housekeeping matters" are updates to the 2035 projections for population, employment, and traffic modeling. This will formalize an expansion of the hydraulic autoism that has actually been breaking down for the last decade. So this is a little suspect. The Staff Report also says there will be a future set of amendments for "capital project lists and priorities." This will likely be a mixed bag: Things like the new bike lanes and crosswalks on Commercial Street could be a part of it, but there might also be Third Bridge bits. It will be something to watch.

The Lord & Schryver Conservancy is applying for a property tax exemption for Gaiety Hollow on the grounds that the house and garden are used for a "public park or public recreation purpose." This is interesting because "public park or public recreation" seems like it's meaningfully broader than the fairly strict preservation project for the house and garden of Elizabeth Lord & Edith Schryver. It also seems to stand in some tension at points with earlier characterizations of the project as regards parking, noise, capacity, and allowed uses. Like many things on the project, this works an ambiguous middle ground and I'm not sure there's a clear reading here. So it will be interesting to see how Council decides. If they decide that the museum and grounds meets the criteria for "public park or public recreation," it seems like it will be more difficult to maintain that high-quality bike parking would violate "the historic integrity of the garden."

Over at SCV they have a couple of notes (here, here) on developments in the Police Station siting saga. The City has engaged an architect for three site concepts and assigned a Council subcommittee to work on it. Maybe things are as secretive as SCV fears, or maybe fears are overblown. But it's something to watch anyway.
Posted by Salem Breakfast on Bikes at 9:30 AM

The dilemma of how to deny a development, because of a potential future project is not new to Salem. The proposed new bridge to West Salem is on paper, but it has yet to have any significant approvals yet to make it a real thing. So, if someone comes along and wants to develop in the area of that phantom project, the City has no grounds on which to deny them.

The investor is betting that 1) the project may never happen; and 2) if it does, they will be compensated nicely at the time of buy-out. Win- win for the developer. There used to be a rule that if a project was to happen within a set period of time (like 10-years) they would put conditions into the planned project's approval. However, I think that we can all agree that a 3rd bridge is more than 10 years away.....if ever...from being built.

If the Cities/Counties were actually serious about this bridge happening, they would be buying up the land around the proposed bridge=heads. But they are not, so those of us should take some comfort in this application's approval.

Also over at SCV is important news about the City Manager hire:

Scooping the Statesman-Journal, and a contrast in public process. That's solid community reporting!

Susann's right that it would have been better to frame up the problem with the future development in the pathway of the proposed bridge as a matter of full disclosure rather than a matter of permitting/permission. Thanks for the historical perspective.