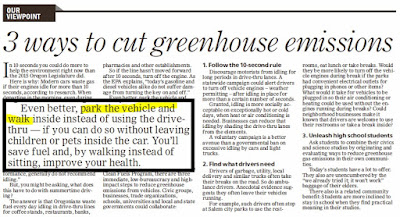 It shows no awareness of scale. It's all about how to maintain current driving patterns while making teensy-tiny sweet nothings.

Buried in the wind-up is a real suggestion: Park the vehicle and walk.

Finding ways to substitute bike/walk/bus trips for drive-alone trips is far more powerful than starting and stopping your engine in the drive-through or figuring out ways to use your car's a/c without the engine running during a break.

How about "carbon tax" and raising the gas tax. Those are market-based solutions that don't involve regulations or other "red tape." How about better transit and facilities for people who walk and bike. There are lots of substantive policies the editorial might have embraced - but the piece instead carefully avoids anything that might look like "government action." Bigger steps will be necessary, though.

Third Bridge on the Radio

Also, you may have seen the N3B has been running commentary (here and here) on some talk radio appearances by the Mayors of Salem and Keizer and a representative from the Chamber, all to extol the Glorious Splendor of The Third Bridge.

You can listen to the full podcast here (40 min, 17mb). It's hard to say how useful it is to drill into. It's talk radio, after all, where truthiness prevails. Not everything said will be truthful or probable.

25th and State at SESNA

Tuesday the 25th, SESNA meets and on the agenda are concerns about the interesection of 25th and State. State Street is the boundary between NEN and SESNA here, and so this is a continuation of the conversation started at NEN last week. (See that post for more discussion.)

Minutes for the last meeting also suggest the development proposed for 23rd Street just south of Mission may be back on. That will be something to watch.

Local historian Virginia Green also threw it down and "challenged SESNA to join her Historic Walking Tour project." That could be a fun project.

The Policy Advisory Committee, including Salemites Steve Dickey of Cherriots and Peter Fernandez of the City of Salem, for the update to the State's walking and biking plan meets Tuesday the 25th also.

They meet from 1pm to 4pm at the Chemeketa Center for Business and Industry, on the corner of Union and High, in room 115.

On the agenda is the draft of the plan and the decision to move forward with a formal release for public comment.

(See here for some preliminary observations.)


One note suggested that the Policy Committee for our local Metropolitan Planning Organization was also meeting on Tuesday the 25th, but there's no agenda or packet posted, so I'm not sure about this. (This post may be updated.)  Update: No meeting.
Posted by Salem Breakfast on Bikes at 7:00 AM

The August 25th SKATS Policy Committee has been canceled. We will be having the September 22nd meeting.

Added link to podcast of N3B appearance on the radio.