NHTSA: A Year of "Accidents" Cost More than one Fortune 500 Company is Worth

A couple of days ago Warren Buffett purchased Precision Castparts for something like $37 billion.

In a just released report on traffic death and car violence, the National Highway Traffic Safety Administration suggests the cost of one year's car violence is equal to almost twenty-three Precision Castparts.

23 of the whole company.

The NHTSA estimates the "the total value of societal harm from motor vehicle crashes in the United States in 2010 was an estimated $836 billion."

If the yearly collection of "accidents" cost nearly 23 times the entire value of a Fortune 500 company, is "accident" truly the best way to think about them?

Readers here will know the answer. We have a system of hydraulic autoism that statistically promotes car violence and yet seeks to hide and mystify that violence behind notions of "accident." By the word and the constellation of meanings around it, we are habituated to death and injury caused by our autoism.

We even know cars are the leading cause of death for kids, but we insist cars and driving are benign. 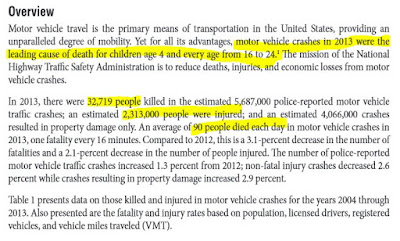 The report itself accepts the framework of hydraulic autoism; it's officially a summary of "traffic safety facts," not a summary of car violence and death. But the numbers are pretty stark.

If something is known to be dangerous, the best way to reduce risk is to do less of it. Simple systems that let us drive less will do more for safety than complicated arrangements that try to keep driving at the same levels.
Posted by Salem Breakfast on Bikes at 9:30 AM