Several notes of interest in the paper today about bikes!

Doug Parrow, featured here in a story about touring the Tour de France, was a long time advocate and Board Member of the BTA and and Salem Bike Club. But he's mostly retired from those roles - so he can enjoy things like making sure the bottles of wine were empty! 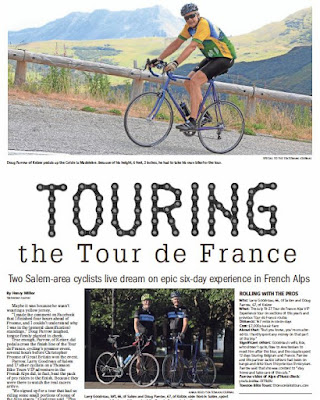 But at the same time in the paper, a "get off my lawn" moment: 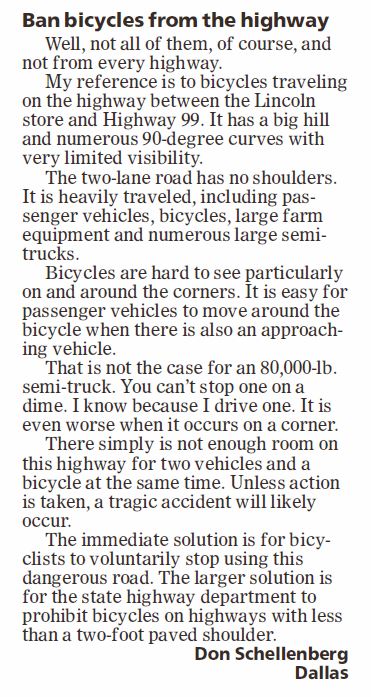 I believe that's Zena Road we're talking about, and that's a gateway to wine country and some historic sites. Lincoln itself had an important role in farming and transportation. It's lovely close-in biking.

The LTE is a perfect expression of hydraulic autoism and bicycling impedance, the idea that free-flow is optimal and nothing should impede the free-flow. (But you'll notice the letter writer isn't saying the "get off the road" about farm equipment or deer!)

A better solution might be slower speeds. If visibility, especially on corners, doesn't provide enough stopping or slowing distance, then speeds are too high. 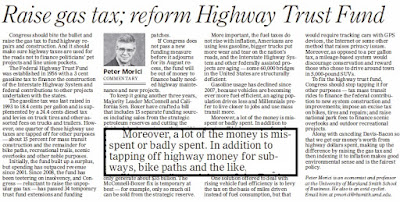 Finally, raising the gas tax is an excellent idea! Unfortunately, the writer repeats the canard about wasting money on bikey things. Yesterday BikePortland had a good story on how making it easy for people to bike, bus, and walk makes it easy for people to drive - and investing in biking "and the like" is a whole lot cheaper than new highway construction. The amount of the Federal Highway funds that actually goes to bikey things is very small; even if we assumed for a moment that 100% was truly wasted, as a total proportion of the highway fund that's not actually important.

(It's hard to see here, and this is a slap-dash quick-hit, as details on federal policy on this has not been an interest - but the bucket for Transportation Alternatives has been about 2% of the total. Bikes of course don't get all of it. Some readers will know more and may be able to offer a more precise answer.)

A much larger source of waste is highway expansion itself! Shifting to a "fix it first" policy would do much.

Thanks for the details on Oregon's embrace of "fix it." There was a July 2nd memo on the "enhance" side and "scenario c" that was attached to a couple of meeting agenda for MWACT and SKATS, but never the one you reference. Hopefully that will be published at some point. (Or maybe it was in the OTC packet and has since been scrubbed.)

However, as a high-level policy, we still don't yet fully embrace "fix it first." If we had a true "fix it first" policy, we'd abandon things like the Salem River Crossing process, for example, and fix the Marion and Center Street bridges first. We'd also have a more robust approach to seismic retrofits.

It will be interesting to see if what you say about "not new lanes" truly holds up in the 2018-2021 STIP itself.