Transportation in Closure of Keizer Grocery Store, Land Use

Notes in the weekend papers on grocery stores and the conference center show how we miss transportation in our analyses. 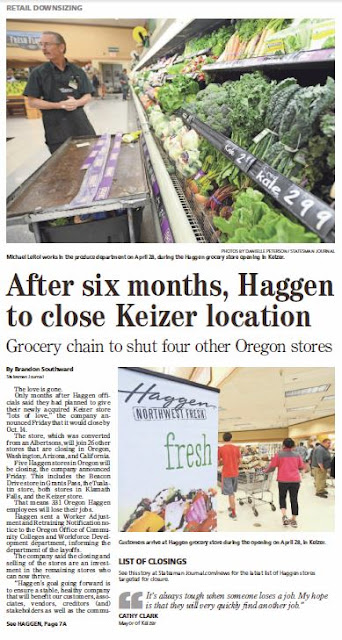 You probably saw the news that after just six months of operation, the Keizer Haggen grocery store is going to close.

The store had been purchased by Haggen as a result of the Safeway-Albertson's transaction earlier this year.

The Haggen, formerly an Albertson's, is just a couple of blocks north on River Road from a Safeway store. It's not difficult to understand why one of them was redundant and available for purchase when Safeway and Albertson's joined. 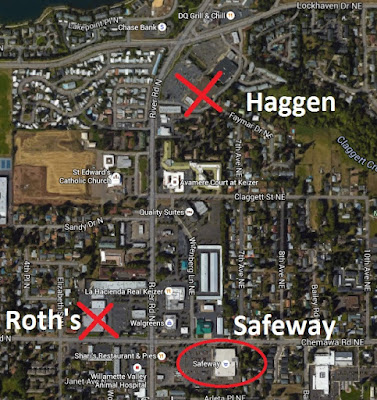 The immediate area also had a Roth's, which closed recently.

It seems likely that the concentration of large retail along River Road resulted in a kind of market saturation for large grocery stores. In an uncritical way, anyway, it is easy to look at the map and to suppose they were too close together to develop sufficiently large individual markets. They were all competing, and so consumer preference in the neighborhood "grocery basin" or "grocery shed" yielded one winner.

There are additional factors in play, of course. According to The Oregonian


When Haggen opened its new stores in former Albertsons and Safeway locations in recent months, shoppers in many places complained of high prices and a shopping environment that didn't change much from the previous stores.

And you saw that also here.

But if the stores had been spaced out more, it is at least possible that they would have enjoyed different "grocery sheds" and developed individual markets as neighborhood grocery stores in addition to whatever destination business they might also have developed.

(Though of course there is also the pattern of increasing centralization with Walmart, Costco and other kinds of even bigger-box warehouse stores that sell groceries. The margins in grocery retailing are said to be razor thin. They thrive on scale. This is a problem for cities and neighborhoods, who are better served by more local configurations to which people can walk and bike on short trips. The economics and siting of grocery stores may not get enough practical attention in urban planning and development - though it wouldn't be surprising to see a larger body of academic study on this.)

Keizer is not an persistent interest here, and I don't know if Keizer Station will get a large grocery store (you might recall a Walmart was proposed for Area C), if Cherry Avenue would get a grocery store, or if there are other areas zoned for commercial that might support a grocery store. It's hard to say what coverage might be possible or likely.

But land use matters. If everything is confined to just a few auto-dependent stroads, and then grocery stores cluster too closely, it's not surprising some should close.

Here in Salem we saw this most recently with the Safeway on middle Commercial. It closed, languished for a while, and now will no longer be a grocery store.

Really, just how Green is the Conference Center? 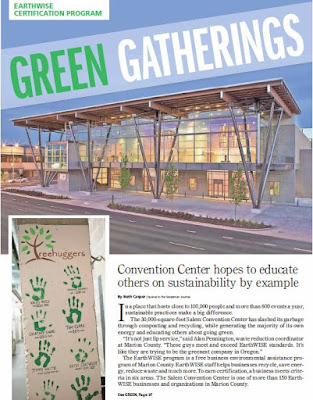 You might also have seen the piece about solar panels and composing at the Conference Center.

That's great and all, but in not looking at transportation, except in a nod to


the underground parking garage, [where] two spots are dedicated to electric vehicles and feature charging stations.

we might miss the fact that the whole enterprise is premised on encouraging carbon-intensive travel by air and car. Because of its location between two State highways (Trade and Front) and two equally large arterials (Liberty and Commercial), even Salemites won't walk or bike to it! Few employees also walk or bike or bus, I suspect.

Any analysis of the Conference Center should include the carbon burden created by those traveling to conferences and conventions. There are also significant questions about the annual amount of Urban Renewal and City of Salem subsidy for the Conference Center - whether it is financially sustainable for the City.

In short, there are very real questions about just how "sustainable"and "green" it actually is.

This is not to say that work on solar panels and composting isn't valuable. But before we go overboard with the advertorial positivity, a more sober analysis might suggest just how much further there really is to go, and might question as too narrow the prevailing framework by which we currently make claims about "sustainability."

At the very least, it's time to start defining another level of "green" certification that includes a deeper life cycle and use analysis.
For an interesting discussion of some related issues, see this about a home built to at least three different standards: LEED, Minergie, Passive House (and more!) and some of the non-overlapping ways they fill in gaps.
Posted by Salem Breakfast on Bikes at 7:00 AM

A great insight about the Conference Center, SBOB. Thanks for that. To be really green we need to start conferring in a whole new way that doesn't burn as much fossil fuel. I've been to lots of conferences here over the year and they are anything but "green." Most involve flying in lots of speakers and having folks drive to the conference from all over the state. We have the technology to do it differently. Just need to break the old habits.

A vox article on Berkley's new soda tax has an interesting tidbit on grocery shopping:

The Oregonian has a piece about "mid size" grocers:

'New midsize grocery stores (those from about 40,000 to 60,000 square feet, like most Safeway, Albertsons and Thriftway stores), won't fit in very many commercial spaces in urban centers.

Smaller stores have more options in urban centers, he said, because they can move into strip malls and other retail spaces rather than being confined to former grocery store buildings.

Thanks for the update.

The Winco press release specifically mentions it as a somewhat smaller format with a special name (and perhaps store concept):

"While smaller than a typical WinCo, the 40,000 sq. ft. store is designed specifically for markets like Keizer....'We’re bringing the Waremart name back for this special store,' added the company spokesperson."