In advance of its meeting on Tuesday the 25th, ODOT has released the draft Bicycle and Pedestrian Plan for review.


It's certainly more colorful than the vintage 1995 plan it will be replacing.

But how much better, really, will it be? Will it enact substantive policy and funding changes? Or will it remain at the level of "wouldn't it be nice if..."?

I worry that it will be too much aspirational and optional, and not enough of an agent of change in the agency and change in actual transportation funding and planning.

There may be more to say in a post closer to the meeting, and after reading the plan in detail.

But here's a few clips.


Buried in it is this random map of Salem. Ordinarily you'd read it as illustrating a "level of stress analysis," but two things make this reading difficult.

It doesn't correspond to Salem's arterial-collector-local street heirarchy, and it is too much a binary thing with red-brown, and if so only shows two levels of stress.

The caption discusses four levels of stress, and you'd think a map illustrating this would be four-color, not two. Some streets are missing, and these are some of our largest arterials, parkways, and highways.

Now in an ironic reading, it is possible to say that what it says is that riding in Salem is makes you feel red - it's always stressful!

But I don't think that's really what it means.

Of course, this is a draft, and maybe it's not fair to pick at it in this way. Maybe the map is a placeholder.

But it illustrates a way the plan could be more about the latest buzzwords and fancy rhetoric, and short again on actual policy and direction for funding changes.

Longtime advocate and former chair of the Oregon Biccyle and Pedestrian Advisory Committee AJ Zelada has a three page letter appended to the end of the July meeting summary. After reviewing several of the proposed performance measures as wanting, in conclusion he says, "The absence of these self-analysis says to me, a plan with no teeth....This is a serious, critical flaw not a path towards success."

I think that the statewide bike/ped plan is a great place to make those funding commitments. Plan is not done, but I'm already concerned.
— Gerik Kransky (@gerikkransky) July 9, 2015

I want to give @OregonDOT credit for conducting the bike/ped plan in the first place. I don't want to see the opportunity to reduce GHG lost
— Gerik Kransky (@gerikkransky) July 9, 2015

If you read the plan yourself, let us know what you think!

Thanks to Curt (see comment below), the origin of the random map is known!

Sure enough, it must be from Peter Schuytema's 2014 presentation, "Bicycle Level of Traffic Stress: A system connectivity methodology."

But what I think it shows is even more complicated than Level 1 in red and Level 2 in brown.

(It probably made sense in person with the oral commentary, but as a stand-alone it is not clear.)

I think that both red and brown show a network of  "Level 1 + Level 2" rated streets, which together can be defined as a "low-stress network," with downtown connections highlighted in red, and outlying areas in brown. On the red streets there might be at least one continuous route that does not require travel along a Level 3 or 4 rated street - though crossing such streets are of course necessary.

The voids, the missing streets, are those rated Level 3 or 4 - or maybe just Level 4, it's not clear - and these voids show the separation that creates "islands." (Though if you look at the enlargement, there are some tiny red sub-islands as well. The island concept is not well considered perhaps.) 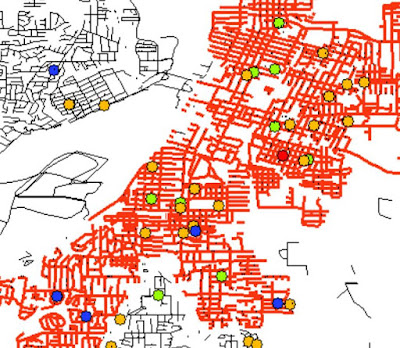 The second slide shows the red downtown "island" in more detail. It has part of South River Road, Mission Street, Union street, High Street, lots of hills in the southwest quadrant - lots of places that regular cyclists might use, but which still really shouldn't count as part of an intuitively obvious "low stress network." Crossing Highway 22 in downtown is always tricky, and I'm not sure that the one crossing at Winter Street should count as "low stress." River Road might have that path, but it is always nerve-wracking with the speeding autos close by! There must be also a glitch in the data at the Pioneer Cemetery, showing a connection where none exists. You might find other instances of "false connectivity." The red network is larger than it should be.

So it is possible to quibble a fair bit with the map and its antecedent analysis.

This is an analysis that to a traffic engineer might make sense considered as the set of streets conforming to a list of abstract criteria, but as an analysis of lived bicycling experience, it is too much model and not enough reality.

Even if the details here are tedious to you, there is a take-away that should be of interest:

A Statewide and high-level bike plan embracing analytics that conclude Salem's low-stress network is this robust might not be a very useful plan.
* For previous notes on the plan and process, see here.
Posted by Salem Breakfast on Bikes at 7:00 AM

This may be where the random map of Salem came from:

The slide with the map doesn't have a legend. But based on the title, I believe it is showing the level 1 streets in red and the level 2 in brown. Level 3 and 4 streets are not highlighted in order to show the "islands" of low stress streets that are isolated from each other and the rest of the network by the high stress arterials.

Thank you! That's it. Updated post with additional comments on the map.