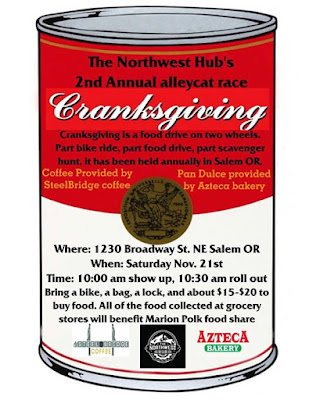 Northwest Hub has news about this year's Cranksgiving.


Each year Cranksgiving is held on the Saturday before Thanksgiving as a way for messengers and other urban cyclists to socialize, compete, and enjoy themselves while also raising food for local soup kitchens or food pantries in time for the Thanksgiving holiday. It is one of the only alleycats focused on raising donations for good causes.

Bring a bike, a bag, a lock, and about $15-$20 to buy food. All of the food collected at grocery stores will benefit Marion Polk food share.

PS There will also be Coffee provided by Steel Bridge and Pan Dulce (Sweet Bread) provided by Azteca bakery.

(This is the second consecutive one, but you may recall its appearance in 2010!)

The Salem Area Trail Alliance and Rotary Club of Salem announced last week that SATA has been awarded the 2016 Goodworks Grant.

This grant is the last large influx of funding needed in order to move into the construction phase of a Wallace Marine Bike Park & Trail Facility. The facility will include 2 miles of cross-country trails and two pump tracks, one dedicated to young children and beginners, the other to challenge more advanced riders. The trails will integrate 8-10 bicycle trail features throughout.

The goal of the GoodWorks grant our club awards annually is to support the health, education and general welfare of the people in our city – primarily the youth. We think this project will do just that, and so much more. We love this city, and enjoy finding and backing projects that help to make it a better place. What a fitting project for this year’s Rotary International theme: “Be A Gift To The World.”

Restore Oregon has news that tomorrow the Oregon Supreme Court will hear arguments on the appeal of Lake Oswego Preservation Society v City of Lake Oswego:


Central to the case is Oregon’s controversial 1995 owner consent law, a statute that allows property owners to refuse local historic designation. Although the original law provided a retroactive opt-out provision for owners who objected to designations imposed before 1995, the legal battle over the fate of the Carman House—a property whose subsequent owners are seeking removal of landmark status in order to demolish the house—has evolved into a threat to thousands of landmark designations across the state.

Bascially, if you purchase a property knowing it's an historic property, you should not be able to undo the designation. In a way the designation becomes a covenant that travels with the property from owner to owner. Undoing this would make historic preservation even more subject to the transient whims of owners. And we know, as we have seen with Howard Hall, even under existing law, how difficult it is to preserve buildings that enjoy historic designations.

The greenwash, especially, is so bizarre. How can a giant bridge and highway have any benefit to the environment? The helpful move is planning and policy that means less driving, not expanded capacity that induces more driving. This is not merely disagreeable or debatable, it is disconnected dots and flat out wrong.
Posted by Salem Breakfast on Bikes at 12:01 PM

The 3rd Bridge enthusiasts like to greenwash the 3rd Bridge by saying that cars stuck in traffic congestion emit more CO2 than if they were moving. What this argument fails to acknowledge is that traffic peaked on the Marion and Center Street bridges in 2006, so it is a myth that congestion is increasing. Actually traffic on our two bridges has been essentially flat since about 1995. If the 3rd Bridge were ever built it would just encourage more suburban sprawl in West Salem which certainly won't be good for the environment in the long term. But we don't have to worry, because the 3rd Bridge is so ridiculously expensive, and would require tolling the bridges we have, so it will never be built. The big question now is how soon we can pull the plug on the planning process that has already wasted about $8 million and will waste another couple million if we don't put a stop to it.