As Pringle Square's second phase of the South Block Apartments is going up at the former Boise site, in another small detail it has turned its back on the sidewalk and faces inward instead of outward. There are three of these details now, and that's a trend, a pattern. Together they represent a meaningful refusal in engage the public life of the city as it is expressed on the sidewalks.

The first detail was the way the ground floor along Commercial Street was three-quarters or more of sterile parking garage. The northern section has a couple of glazed bays for office or storefront, but the great majority of it is dusty parking garage. At the time this was disappointing, but it didn't seem likely that an entire row of ground floor storefront would be commercially viable in that location, so the move was at least understandable.

Then we learned that the path connection on the south side of Pringle Creek under the new Commercial Street Bridge was blocked and made private for South Block residents. The City has shared no details on the negotiation for the public easement here, and it still seems strange that the public path system could not exist on both the north and south sides of the creek.

And last summer, that edge area on Bellvue and Commercial, which at least in some renderings had been a grassy corner lawn, was totally enclosed by a grey cinder block wall. It's like a sound barrier for a suburban neighbor next to a highway!

This is really disappointing. With these three moves, Pringle Square and South Block has made itself into a real enclave. It is literally a gated community now.

While it is appropriate for interior spaces to be private, the exterior spaces that meet the public-facing sidewalk, path, and street system, spaces partially subsidized by the City with incentives, should instead represent littoral mixing zones where the public and private transition and interact. The walls and gates eliminate mixing zones and create inert dead-zones. Aesthetically, the parking garage and cinder block wall are ugly and dull.

Indeed, the terms of the initial approvals in January 2012 addressed conformity with the South Waterfront Mixed Use Zone Design Guidelines on exactly these matters, and while the final project's details may meet the technical requirements of them, as they work together in a pattern they violate the spirit and intent of the guidelines. 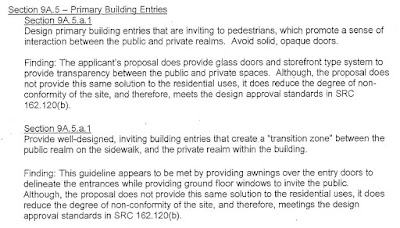 It is not pleasant to criticize the project in this way, as it is a very important and exciting one. But in this regard it is a real disappointment.

As additional mixed-use projects arise in Salem, we need to make sure that we engage the sidewalk level and create spaces that are attractive for walking. Foot traffic is business!

When I say "greet the sidewalk," here's what I mean. The contrasting materials, the human-scaled arcade, the public space that connects with the sidewalk - all this together creates transparency and interaction between the public and private space.

This design solution isn't right, of course, for Pringle Square, but as mood and ethos it contrasts powerfully with the ways Pringle Square retreats from the sidewalk zone.

The decisions at Pringle Square are almost certainly driven by the developer, not designer, it's also important to consider.

More positively, the bike parking is fully covered! And I think there might be more installed actually than the original plan indicated. So that seems like a real good thing.

Maybe if Salem didn't rebuild the bridge as a highway the building would have had a better interface with the street. We should be asking why Salem had to build a three lane plus wide shoulders road over the creek? It would have been a better transition to The neighborhood south if the bridge was two 10 foot lanes with parking bewteen the car lane and the bike lane.

Added an update with a still from a news clip about designing around and embracing the Dockside saloon and restaurant. That's going to be an interesting building to see when it is completed!