Tomorrow, Tuesday the 23rd, at the Policy Committee for our local Metropolitan Planning Organization, Cherriots Rideshare will present its first annual report. (Full agenda here; it contains an inferior scan of the annual report.) 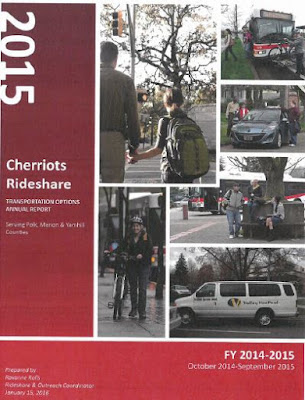 You may recall last summer Cherriots Rideshare announced its first strategic plan, and the annual report is an important sequel.

Probably the most interesting thing in the report is the subreport on the individualized marketing program from last spring in the Grant and Englewood neighborhoods (Grant & NEN boundaries). 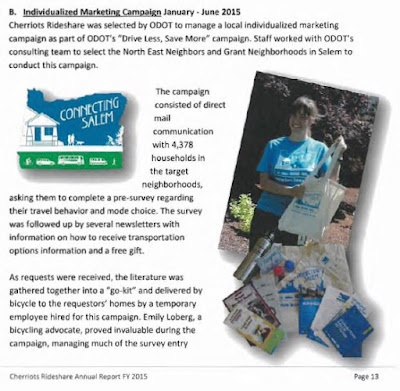 The program targeted 4,378 households in Grant and NEN for preliminary contact on alternatives to drive-alone trips. Individuals from 13% of the households continued on:

Overall this yielded a reduction of a little more than 7% in drive alone trips: 2.5% trips shifted to bicycling, 1.9% to walking, 1.5% to transit, and 1.3% to carpooling. (While the report does give a comparison for the initial conversion rate, the report doesn't include a further comparison for this part; we don't know what percent reduction is typical for those who do then go on and decide to participate in the program. It might not be right to infer from silence, but it is is possible that 7% is on the low side, given the omission here.)

ODOT paid for the bulk of the project, and in addition to some regular Cherriots staff time, there was also at least one half-time temporary employee working on it.

One question that the project's outcomes raise is whether this is evidence we are totally barking up the wrong tree.

The Grant and NEN area is gridded and very close to downtown. Especially for those who might work on the Capitol Mall or at Willamette or the Hospital, there is almost no reason to drive.

4.4% of trips shifted to bike and walk seems small. Maybe it's not, but for as flat and as near to downtown as it is, I was hoping for a larger shift. If we assume that each of the 583 participating households has one commuter who could be impacted, then 4.4% is 26 daily commutes shifted. The larger total of 7% is about 42 commutes.

So that means out of the total population of 4,378 households, this individual marketing effort made a difference of only 1%. That seems like a lot of effort and hand-holding for a difference that's hardly greater than a rounding error.

Certainly for the bike and walk side of the equation, a more interesting set of data would be sorting household members by commute distance - and then looking at the before/after delta. What is the effectiveness of the program for commutes under three miles?

But even with that refinement in analysis, the number may still be small.

It may be, in fact, that as long as we heavily subsidize auto parking, trying to sweet-talk people into things other than a drive-alone trip is like pushing string uphill. It may be that the single most cost-effective thing we can do is just to stop the parking subsidies.

There are other interesting bits in the annual report. The subreport on Salem Sunday Streets still seems wildly overoptimistic - 3500 people, really? That's so very hard to believe.


The event highlighted active transportation activities by offering a variety of cycling activities, a 5k run and walking tours. The route was laid out with the intention of encouraging movement on and around the capitol mall area.

There were a total of 65 organizations that had booths and while no official count of attendees was taken, based on food truck sales, photos from the event and table interactions it is estimated that 3,500 people attended the event. While it was hoped that attendance would be higher, the day of the event was overcast and rain was predicted which kept attendance lower than anticipated.

The ridematching report finally gives more context - and acknowledges that they have to contend with clunky software. Serving 1000 new users each year for the whole Marion-Polk-Yamhill county area seems like that's a rounding error in the whole body commuters here.

Again, we don't have the comparative numbers: What are the per capita rates (or whatever number is right) here, and what are they in Corvallis, Eugene, Bend, Roseburg, Ashland, and Portland? 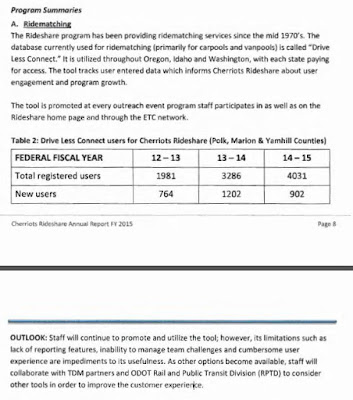 
its limitations such as lack of reporting features, inability to manage team challenges and cumbersome user experience are impediments to its usefulness. As other options become available, staff will collaborate with TDM partners and ODOT Rail and Public Transit Division (RPTD) to consider other tools in order to improve the customer experience.

The whole thing is just great to see. (There's also more charts in the Cherriots quarterly report on Rideshare.) Rideshare is understaffed, underfunded, undernourished. Hopefully by giving more visibility to it and by using more robust metrics, it will be possible to focus better on programming that works, and to ask for more funding.

If we have a choice between spending $500 million on a Third Bridge or $5 million on a supercharged "transportation options" program - how is this not an obvious choice? For just 1% of the cost of a bridge, we could do a hell of a lot.

And if we charged for parking, maybe market forces alone would achieve the correction, and a transportation options program would really take flight on the "options" part, making everyone feel they have a broad range of realistic choices in their transportation toolbox.


We're trying to manage the whole parking supply without using prices. And there's no other part of the economy that we do that with. You couldn't imagine managing the gasoline supply without charging for gasoline, or the food supply or the housing supplier, or anything else.

We have expensive housing for people and free parking for cars. So I think we have our priorities the wrong way around.

And the right way around would be to allow the price system to show drivers how much parking spaces cost....

Prices are really essential for managing an economy, except, you know, in the Soviet Union, they tried to do without them. We saw how that worked out.

Besides the Rideshare Report, the City of Salem will present on the final recommendations for the Commercial-Vista Corridor Study, but it's just a line item on the agenda without any presentation materials in the meeting packet. I don't think there would be anything new in it, however.

Other items on the SKATS-PC agenda do not appear of immediate interest or significance, and instead are routine housekeeping kinds of things.