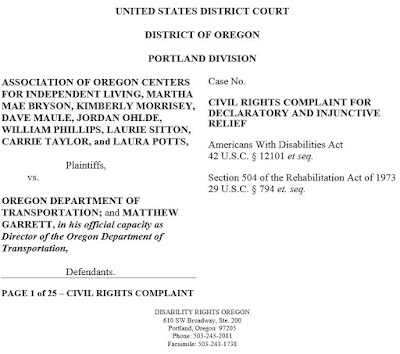 Today a group filed suit against ODOT for failing to comply with ADA requirements.


This action is brought against Defendant Oregon Department of Transportation (ODOT) and its Director, Matthew Garrett, in his official capacity as Director of ODOT , to remedy a systemic pattern and practice of discrimination against people with physical disabilities, particularly those with mobility impairments. Effective January 26, 1992, Title II of the Americans with Disabilities Act required that state and local governments ensure that persons with disabilities have access to the pedestrian routes in the public right of way. An important part of this requirement is the obligation whenever streets, roadways, or highways are newly constructed, paved, resurfaced or otherwise altered to provide compliant curb ramps where street level pedestrian walkways cross curbs, and accessible pedestrian signals at curb ramps with traffic signals. Since at least November 1993, it has been clear that paving and resurfacing are “alterations” that require the installation of curb ramps where street level pedestrian walkways cross curbs. Nevertheless, between 1993 and January 1, 2014, it has been ODOT’s unlawful pattern, policy and/or practice to newly construct, pave, resurface, or otherwise alter roadways throughout the state without installing curb ramps or bringing non-conforming curb ramps and pedestrian signals into compliance with the Americans with Disabilities Act and Section 504 of The Rehabilitation Act. This lawsuit is filed to remedy the Department’s systematic violation of the law with respect to the new construction, paving, resurfacing and other alterations of roadways.

ODOT quickly sent out a press release in response:

The Department will spend millions ensuring adequate access for the disabled

SALEM – Following guidance from the U.S. Department of Justice and the Federal Highway Administration, ODOT has invested millions of dollars and will invest more than $18 million in the agency’s next Statewide Transportation Improvement Program to construct ramps that ensure the disabled have access to the state transportation system.

ODOT has careful policies in place to ensure that all of its work complies with ADA requirements. “We take compliance with federal laws and regulations, including the Americans with Disabilities Act, very seriously,” said Matt Garrett, ODOT’s Director.

Despite its reliance on federal guidance, the Department has been served with legal action from the group Disability Rights Oregon (DRO). When DRO approached ODOT last year with concerns about ADA compliance regarding curb ramps, ODOT sat down with the group in hopes of working together to address those concerns. “We are disappointed that DRO chose to end our conversations and sue,” Garrett said. “We would rather collaborate with DRO and invest in improvements to serve those with disabilities, instead of dragging a case through years of expensive litigation. We would prefer to spend money on improvements for the disabled rather than divert resources to legal fees.”

Since passage of the ADA in 1990, the Federal Highway Administration (FHWA) has provided ongoing guidance and interpretations to state DOTs on how to comply with the requirements of the regulations. The ADA has been in effect for more than two decades now, and federal guidance has evolved over time. ODOT has worked in good faith to follow FHWA’s guidance, adjusting our policies as the guidance evolved.

On June 28, 2013, FHWA in conjunction with the U.S. Department of Justice released new guidance that included specific clarifications on which paving activities trigger the requirement to install curb ramps as part of the paving work. ODOT took steps to ensure that it followed that new advice and currently installs ramps when performing major improvements or resurfacing a roadway.

Director Garrett is committed to continued compliance with federal law and rule and looks forward to settling this matter in a way that benefits Oregonians. “We are proud of our record on the ADA and will vigorously defend it in court. Having said that, we still hope that we can sit down with DRO and reach a mutually beneficial agreement that focuses on meeting the needs of those with disabilities rather than running up legal bills.” Director Garrett sent a letter to DRO representatives prior to the issuance of the suit in hopes of continuing the conversations outside of court. A link to that letter is attached.

But of course ODOT has wasted tens, even hundreds, of millions of dollars on the Columbia River Crossing, on the Highway 20 Eddyville fiasco, and on the Salem River Crossing.

That represents a lot of resources that might have been used for ADA compliance and for other forms of non-auto travel.


By choosing the path of litigation, DRO will cause the diversion of substantial resources away from needed ADA upgrades and towards costly, unnecessary legal battles.

But, you know, if ODOT wasn't so committed to its paradigm of hydraulic autoism, auto through-put at all costs, tens of millions of dollars could be better spent on ADA compliance, complete streets, and genuine multi-modal facilities.

This is something of a persistent myth, that we have to keep spending for autoism constant and that the extras have to come from a budget of extras. If we don't budget more for extras, then we can't have more extras. (We see this a lot at the MPO, for example.)

This frames non-auto capacity as "enhancements" or "frills," otherwise something non-essential. And something that has to be paid out of an extra-, non-essential budget. We have a separate "sidewalks" fund - look at how small it is.

But if we just simply started reallocating existing funding and did away with its autoist bias, we would find we could afford much more in the way of complete streets. We can't have sidewalks because we keep building new roads and widening existing ones. Strong Towns has the #NoNewRoads campaign, and this rhymes more than a little with that.

Maybe litigation will accelerate the necessary shift in ODOT's internal culture and engineering practices, and in turn influence thinking statewide - much as the BTA's suit did in 1995 for bike lanes.

On a surface reading, it's not hard to sympathize with the plaintiffs. Maybe there will be more to say as this litigation develops.

(Interestingly, and maybe significantly, none of the plaintiffs come from Salem. There are eight, and they are scattered around the state, but no one from here. I know the City of Salem has been doing a lot of ramp work, and I believe it is at least partially in response to the possibility of litigation. The suit is against ODOT, not individual cities, but this is interesting anyway.)
Posted by Salem Breakfast on Bikes at 5:45 PM

If ODOT was so supportive of ADA requirements, we'd probably see evidence of it in the new draft Bicycle and Pedestrian Plan. But since advocates have by consensus called that draft "weak," it is not difficult to see that as strong evidence ODOT is not very committed. Hopefully this will have cascading effects.

We have a settlement. From an ODOT press release today:

"In the largest commitment to an accessible transportation system in state history, the Oregon Department of Transportation, Disability Rights Oregon and the Association of Oregon Centers for Independent Living have reached a proposed agreement which will make the state highway system more accessible to those with disabilities. The agreement settles a February 2016 federal lawsuit against ODOT by the Association of Oregon Centers for Independent Living (AOCIL), and eight individuals with mobility and visual impairments throughout the State of Oregon that alleged noncompliance with Title II of the ADA and Section 504 of the Rehabilitation Act....

The agreement includes a quick-start commitment of $5 million to address curb ramps and pedestrian signals in locations identified by the Association of Oregon Centers of Independent Living, with input from the community of people with disabilities. It is intended to get design work started as quickly as the locations are identified. The $5 million will help start the effort to bring more than 10,000 curb ramps and 1,500 pedestrian signals into compliance with current legal standards under federal law.

In addition to the $5 million as part of the agreement; $18 million has been programed in ODOT’s State Transportation Improvement Program for spending on curb ramps and other ADA features beginning in the program cycle that begins in 2018...

Following the agreed upon schedule, ODOT will remediate at least 30 percent of the curb ramps by 2022, 75 percent by 2027, and will have completed the remediation by December 31st, 2032. ODOT will focus its efforts on high priority locations first.

“It’s a difficult but doable undertaking,” said Matthew Garrett, Director of the Oregon Department of Transportation. “But with this agreement, we as a Department commit to making our transportation system even more accessible for all Oregonians,” said Garrett."

The Oregonian says the settlement has been approved:

Disability Rights Oregon says that a 2011 inventory conducted by ODOT found that 15,270 of 16,938 intersections maintained by the state had deficient ramps....