You might remember that Travel Salem presented some new bike tourism routes at City Council the other day.

But it's not clear that they received adequate review by folks who actually bike!

Let's talk about the downtown one since the urban experience is the focus here.

Though the route is labeled "easy," it is anything but! It looks like it might have been drawn on a map rather than ridden on bike.

In fact, it may be not just super difficult, but it may be impossible by bike (or car, even). 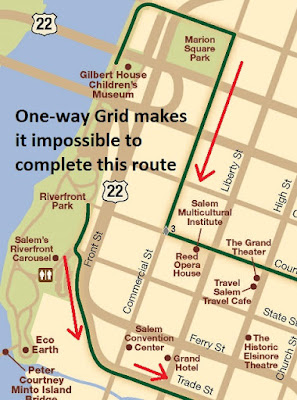 First off, because of the one-way couplets on Front/Trade, Court/State, and Commercial/Liberty, if you generally go counter-clockwise, starting at the south point in Riverfront Park, and go south on Front and Trade, when you loop back on Court Street, you can't go north, upstream on Commercial. Commercial is only southbound here. So that doesn't work.

If instead you propose to go generally clockwise, starting at the north point in Riverfront park, and go south on Commercial, you can't go east on Court Street. Court street only goes west. You also can't go upstream on Trade. This direction doesn't work either.

Because of our one-way grid, the directional requirements of this route are internally inconsistent!

The roads connect when you draw lines on a map, but they don't actually connect for real circulation on the street.

In addition to this, the route is not actually bike-friendly and makes use of too many streets that are high speed or that lack bike lanes.

Mission Street totally lacks bike lanes between High and 12th, and would never be a recommended route for a tourist. But if you somehow made it past 12th on Mission Street, the connection to the 13th street leg that fronts the Train Station is very tricky. The angle at Mission/13th in the Travel Salem map definitely looks like lines on a road map rather than the actual route. The actual route requires many deflections, as well as an underpass along the railroad. For tourists, that requires a high level of explanation.

The bike lanes on Front and Trade are decent by 1980s standards, but they are still part of a State highway and traffic speeds are zoomy and volumes high. On curves you can see where trucks have crossed over and worn down the bike lane striping. Because of the dual right turn lanes near Magoo's, crossing Commercial east-bound at Front/Trade is treacherous (see the big red dot on the map). Front and Trade are not "comfortable" places to bike, and probably not good to recommend for bike tourists, either.

Though the route uses parts of High Street and Court Street, instead of these the current bike map and recommendations are to use Church Street (or Winter Street) and Chemeketa Street. Church street is flat in this segment, and Chemeketa Street is two-way. This mismatch in street selection is less important than the others, but we should leverage our existing network recommendations rather than creating different ones to overlay in parallel.

So in a fairly broad and comprehensive way, this "Historic Downtown Route" is neither useful nor pleasant. It's not a matter of something like a typo, a mistake on one street. It's got whole system problems, unfortunately.

But in truth, it's a difficult task. Presumably a route should include:
Not all of these connect with streets that are currently very friendly for those on bike. Just off the top of my head, I don't have a good alternative to throw out. I don't see an obvious solution.

So there's also an advocacy opportunity here: Travel Salem, let Council know that this is a difficult project and that to support bike tourism, you need more bike-friendly streets - more better, and more of them. Don't let Council be complacent and think the job is done! 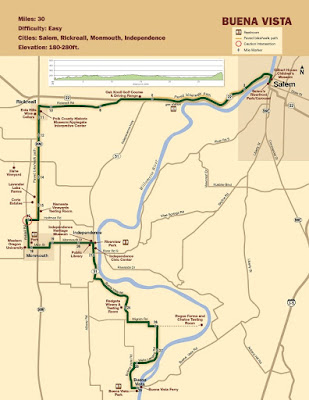 Turning to the out-of-town routes, I have less to say. They are too long to know the routes!

I have biked one, out to Buena Vista, though as a 60 miler it is quite on the outer limit of what I consider a "fun" ride. I'm happier with 40 miles. (Obviously there are plenty of people out there for whom 100 miles is a "fun" ride! Councilor Andersen in his comments referenced going from Buena Vista to Wheatland Ferry. That's a nice loop!)

So I can't really comment on the routes as a group.

The Buena Vista route is labeled "30 miles"; an out-and-back would be labeled 60. A loop would be even better. So this looks more like it's envisioned more like a water route with two vehicles, one at "put in" and one at "take out."

But how does that make sense for bicycle tourists?

Its road choices seem pretty reasonable, though, so no real quibbles there.

Once these maps are posted, I will link to them, and maybe you will have more thoughts. I wonder if they drew on the tried-and-true routes of the Salem Bicycle Club, for example. It is striking, though, that none of them use the Willamette Valley Scenic Bikeway. At first glance, they don't read to me like routes experienced local bicyclists would recommend or formulate. They leave me dubious.

Even if the others are more like the Buena Vista map, based on what I see in the Downtown map, as they appear now, I would not trust them and would not recommend them. If I were to use them personally, I would take great care to cross-check them against the bike map - and that shouldn't be necessary. I don't see enough evidence that these have been carefully thought through.

Hopefully this project will evolve. Just because it doesn't seem fully baked now doesn't mean it can't be improved and grow into something wonderful. But I think it needs more work. I look forward to v2.0!
Posted by Salem Breakfast on Bikes at 7:00 AM

Have you passed on this info. directly to Travel Salem?

Holy crap that's funny! Yeah that "historic route" is a great way to "educate" people on everything that is wrong with downtown Salem. Even if you could go north on Commercial this is a tour of some of the ugliest, most inhumane traffic sewers in Salem.

Thank you so much for your comments. We would be happy to meet and utilize your expertise in this area. Looking forward to it!
Please contact me directly if your are interested in assisting:
Irene Bernards, Travel Salem 503-581-4325 ext. 127