Salem as State Fief: Expectations for Free Parking at the Capitol

Yesterday on twitter there was a conversation about Portland-area Legislative staff and their expectations for free parking in Salem at the Capitol. 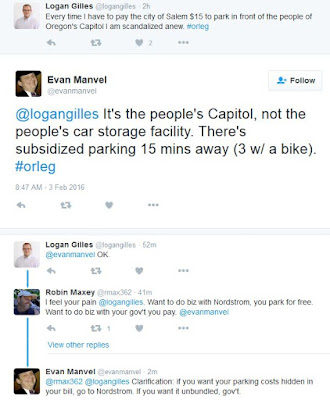 As Senator Courtney works on the project for a seismic retrofit of the Capitol, managing the parking during construction and a temporary Capitol site will very important for Salem. Appropriately priced parking and more robust Transportation Demand Management for state employees, including better transit and off-setting start times, will make the disruption much easier for Salem, and will help transition to lower-carbon commuting. These things will also assist with better managing capacity on the Marion and Center Street bridges.

It's a little dismaying to see the disconnect in City of Salem, State, and environmental policy on Senator Courtney's staff. But that's also a sign of how deeply entrenched is our autoism.

And it's a structural misalignment in which the personal interests of Legislators and staff are largely opposite to the community interests of city and state (and globe). (That's why we need a carbon tax!)

On Saturday Cherriots will have a Planning Retreat, and on the agenda is revisiting the Salem River Crossing Alternate Modes Study.

A number of the recommendations in it are specific to transit, and in Cherriots' headlong rush to embrace the Salem Alternative, they have forgot about making these primary instead.

Additionally, RideShare's new Strategic Plan involves non-transit recommendations as well, and so it will be good for the board to review the whole document. A criticism of the Strategic Plan when it came out was that it omitted a discussion of the Alt Modes Study. Perhaps now the Board will want to integrate them better.

There are a lot of State workers in West Salem, and as a body, their commuting patterns represent some of the lowest-hanging fruit for managing capacity on the bridges.

Bringing conversation together about the Capitol Mall and about the Salem River Crossing is a great opportunity for meaningful progress, but hitherto has been largely ignored.
Posted by Salem Breakfast on Bikes at 12:01 PM