Council meets on Monday, and they look ready finally to move on Marine Drive.

On the agenda is a report and motion to start purchasing property for Marine Drive in West Salem and bridgehead parcels in the Highland neighborhood on the east side of the Willamette River.

Back in the 2008 "Keep Salem Moving" bond measure (original project sheet here), $3.6 million was allocated for "strategic right-of-way purchases," but these have been delayed by the protracted process for the Salem River Crossing as well as concerns that work might illegally jump the queue in the Environmental Impact Statement process. These concerns seem to be resolved. The Salem Alternative alignment is sufficiently settled now, and work for the collector-sized Marine Drive as it already exists and is named in our Transportation System Plan would be independent formally of the EIS and therefore a proper thing to do now.

The position here has instead been that we should want to kill the bridge first, and then we can talk about a right-sized Marine Drive. To undertake Marine Drive now would be to initialize and arm a Trojan Horse that will be used to further the Salem River Crossing. It looks innocent, but just you wait.

But the fact that in this proposal the Marine Drive part is coupled with additional purchases on the east bank should at least prompt some additional hesitation and consideration by those who have though purchasing the Marine Drive right-of-way was by itself mainly harmless.

The report shows three places where the proposed Marine Drive alignment crosses over the Urban Growth Boundary and is outside of it. South of Cameo Street the proposed alignment is totally within the UGB, and that's where the proposed "opportunity purchases" would be located. The map doesn't show these very well, however, instead concentrating on the northern segments outside of the UGB. This means it can elide details like the impact to Pioneer Village. (Though the purchases right now may only be on vacant parcels or from willing sellers.)

There is also no map showing proposed "opportunity" sites on the east side in the Highland neighborhood.

What it does talk about is the tie to Second Street and the passage under Wallace Road. It's a little bit like that's the sugar that makes the medicine go down.

It all just seems a little hinky, that's all.

Mostly other things just looked like details to note in passing.
Update, midday

Whoops! Here's a substantial detail I missed. On the consent agenda - a bundle of actions regarded as unmproblematic and moved as a bundle so as not to get bogged down in discussion or introductions - is a proposed workplan and direction to staff to start implementing recommendations from the Housing Needs Analysis, which you might remember was part of the EOA-HNA, the Economic Opportunities Analsis and Housing Needs and Analysis. One of the very highest level conclusions was that we would need more multi-family housing in Salem.

In order to accomplish this in the medium term, there's a five year project with several clusters of changes to code.

At the top of the list is making it possible to allow "granny flats," accessory dwelling units over your garage or in your back yard.

Item 2 is also a bit like a plan for the "missing middle" - and hopefully will learn from that conceptual scheme and make it even more robust than just duplexes and triplexes.

Another component envisions reducing required parking, which drives up the cost of housing.

This bundle will both address needs for a better supply of affordable housing and for needs to gently increase density as we transition to a lower-carbon city.

Each part runs over a year long, and will entail advisory committees and the usual public process bits.


states unequivocally that bond funds would be used to purchase right of way for the 3rd Bridge ONLY after "a preferred alternative alignment is approved by the Federal Highway Administration."

And therefore than any "opportunity" purchases are wholly premature and violate the terms of the bond.

In response to citizen testimony echoing this, staff have published a rejoinder in a Supplimental Staff Report, claiming "the bond measure language does not require FHWA approval or issuance of a ROD prior to right-of-way purchases."

Also interesting is a proposal for "affordable housing" whose required portion of Marine Drive construction would dead-end to nowhere - unless the City purchases an adjacent segment. (Though left unsaid is the timeline for actual construction on that segment as opposed to mere right-of-way acquisition.) 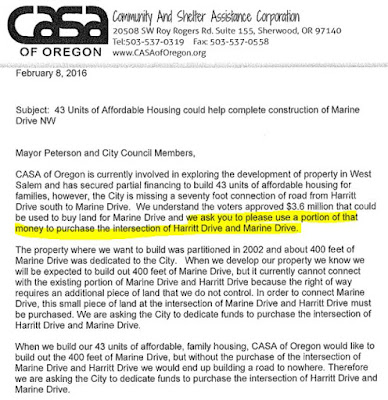 Some trail advocates will also testify in favor of a soft trail along the proposed Marine Drive right-of-way, but this continues to seem misguided and a help to the overbuilding effort. The bulk of the trail portion, however, would seem to be outside of the Urban Growth Boundary, and therefore not actually in play at this time.
Posted by Salem Breakfast on Bikes at 7:00 AM

updated with addition on the Housing Needs Analysis work plan

"What if your town decided to use the definition of a house that is used by major mortgage insurers like the VA, FHA, Fannie Mae, and Freddie Mac?

These mortgage providers consider 1-4 units plus 20-25% additional non-residential space to be a house, a dwelling. All these agencies have mortgage programs designed to finance what turns out to be a pretty wide range of building configurations."

An information sheet that was widely distributed to voters prior to the 2008 Street and Bridges Bond measure election gave this "project description" of the "Strategic Right-of-Way Purchases for New Willamette River Bridge and Marine Drive NW':

"Purchase future street and highway right-of-way in advance of new Willamette River bridge and associated street and ramp connections, in order to preserve from future development, once a preferred alternative alignment is approved by the Federal Highway Administration."

So the City gave its word to voters in 2008 that right-of-way purchases would occur after FHA approval (Record of Decision) of the project. This makes sense. Why spend bond money on something that may or may not be approved? Now the staff is asking the Council to break faith with voters and go back on their word and make purchases in advance of FHA approval. City Council should reject this request that would harm the prospects of any future City bond measure passing.

I am a bit disappointed that the staff work plan to address the Housing Needs Analysis was not shared more publicly or at least with Neighborhood Associations. There was an opportunity to do that at last week's NA chairpersons meeting. Lisa Anderson, planning staff, had met previously with some land use chairpersons and indicated the desire to work with NAs. She also said that she would let us know when the work plan was going to City Council. The Director of Planning was at last week's NA meeting, but said nothing about the matter. However, there was talk about needing more open and timely information of land use matters by several of the chairpersons.

I hope that moving forward there will be more openness and more opportunities to be directly involved in the discussion and decision making processes. The issues listed in the work plan are significant and can have a major impact on the livability of our neighborhoods.

I have been trying to resurrect the old Land Use Network (LUN) that existed from 1992 to 2014, but when recently a request for meeting space for neighborhoods was rejected by the City staff, I hit a snag. I am sure we will be able to find a free place to meet, so that we can begin again to educate neighbors about land use planning and specific land use issues. It is our goal t engage Planning Department staff. But we shall see if they will engage with us. No promises were made when last we chatted.

The Housing Needs Analysis was not very inclusive of neighborhood associations, so at the implementation level it is vital that they are truly engaged in discussions and recommendations prior to their coming to a public hearing. Stay tuned!

Updated with the supplemental staff report, which contests the N3B claim that ROW purchases should only happen after FHWA approvals.

(Shoot, going too fast: The Grant Neighborhood request for a postponement was on the Marine Drive and Highland neighborhood right-of-way matter, not the Housing Needs Analysis.)