"This Changes Everything": Climate Change at Film Series Tonight 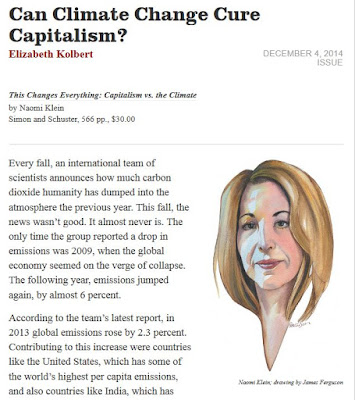 About the book, Elizabeth Kolbert of the New Yorker writes in the New York Review of Books


Klein traces our inaction to a much deeper, structural problem. Our economy has been built on the promise of endless growth. But endless growth is incompatible with radically reduced emissions; it’s only at times when the global economy has gone into free fall that emissions have declined by more than marginal amounts. What’s needed, Klein argues, is “managed degrowth.” Individuals are going to have to consume less, corporate profits are going to have to be reduced (in some cases down to zero), and governments are going to have to engage in the kind of long-term planning that’s anathema to free marketeers.

The fact that major environmental groups continue to argue that systemic change isn’t needed makes them, by Klein’s account, just as dishonest as the global warming deniers they vilify.

It's not clear how direct is the relation between film and book - but it'll probably be an interesting film, and hopefully underscore the notion that it's not just about doing a better job of recycling our stuff and buying more wind energy. Our new "low carbon fuel standard" rounds to zero change, really. Right now we're still pretty much just about tinkering on the edges, and it's deeper structural change that's going to have to happen.