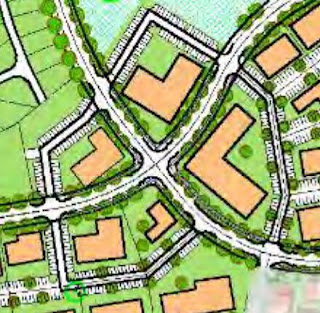 The Staff Report and full agenda's not posted yet, but on Tuesday the 19th, an amended plan for the Sustainable Fairview development will go before the Planning Commission.

This was made necessary by the demolitions in the "crescent" and by the sale of the park parcel to the City. Probably there were other reasons too, as parts of the development are changing as the market for the property generally has been slow to develop.


The goal of retrofitting Fairview Training Center buildings for re-use encountered economic and governmental regulatory obstacles that could not be overcome. On the other hand, the re-use of the materials contained in those buildings will exceed expectations. Almost zero hard material such as stone, brick, and concrete will leave the property. The bulk will be crushed and reused on site. Tens of thousands of board feet of lumber have been salvaged and are being reused. A modest amount of structural ornamentation has also been saved and reused...

As noted above the goal of preserving the older original Fairview campus for reuse proved to be economically impossible. Early twentieth century institutional structures were not suited to retrofit for 21st century use regulations. The most recent (post 1960 structures) are preserved and should be reusable. The future of the small Chapel [light blue] is uncertain. The minimal amount of historical/archeological area will be dealt with in full compliance with applicable regulations. These are a very small cemetery plot that may never have in been used in the 1850’s and a contemporaneous probable cabin site. Both are in areas disturbed by Fairview Training Center constructions. 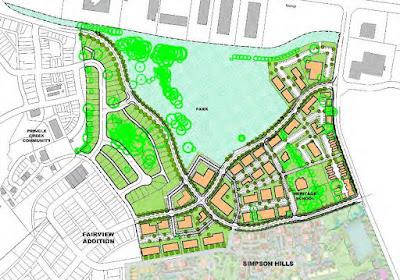 At the very top of the post is a detail that just totally jumped out at me. My first thought was "that's a medieval fortress or walled town!"

Those are alleys and car parking stalls, and not walls, but it still looks like a street plan from early modern times or even older. It's a crossroad, and that "village center" will be immediately adjacent to a City Park. I find that really exciting. There is possibility there for a very lively district.


This Refinement Plan Amendment is caused by the desire to redesign the central area of the Fairview Refinement Plan II and adjacent area to include additional acres for a community park. The community park will be a major amenity and contribute in meeting the purpose of the Fairview Mixed-Use Zone (now SRC 530) in the innovative inclusion of parks and the Fairview Plan goals for parks and open space. It greatly adds to the walkability of the entire Zone....

A community park is consistent with the Fairview Plan. Although the Fairview Plan does not foresee a large community park, it does address the desirability of parks and open space. It describes “A community green located along Main Street in the Village Center will serve as sports field and community gathering place, and a recreational, social, and aesthetic amenity, while also functioning as a storm water management device and an environmental education tool.” This describes exactly the most important change in this amendment. The park provides a great amenity for the entire area of Salem....

The multiple uses projected in this plan add to the strong diversity already established in the existing refinement plans. The best estimate is that there will be about 100 small lot single family, 100 apartments and 80 condo/townhouse living units. This will promote the goal of housing diversity and multiple housing options. Much of the new housing will be “affordable” by local standards, but be varied enough to support social and economic diversity. It is estimated there will be up to 80,000 square feet of mixed use, office, and retail. 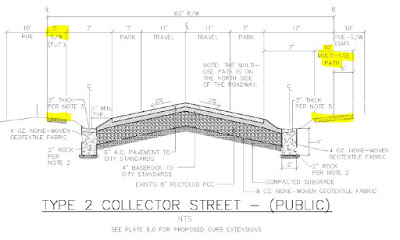 On the two collector streets, there will be a five-foot sidewalk on one side, a 10-foot multi-use path on the other, and two 11-foot auto travel lanes. Once this is built out, it will be interesting to see how the MUP concept works in contrast with a protected bike lane concept that is inside of the curb on the road bed.

And once the Staff Report comes out and they comment in much closer detail, maybe there will be more to say. But it all looks reasonable, if somewhat scaled back in ambition from the original concept and plan.

(Update: Here's the agenda and Staff Report. The Staff Report Recommends approval and they didn't uncover any major problems.)

Hopefully proponents of the park will not want to insist that it have larger buffer zones between it and the development. It is a feature, not a bug, that the village center will abut it directly! Maybe there will be a cafe or pub right there by the ball field. How great would that be.

Have you seen the plan? Do you see anything of particular interest in it?

(For all notes on the Sustainable Fairview/Lindburg Green development, see here.)
Posted by Salem Breakfast on Bikes at 7:00 AM