Over the weekend a letter to the editor rightly pointed out the enormous waste in the proposed Third Bridge. (Additional comment over at N3B.)


Our community plans to spend more than $500 million for a new bridge and highway. This mid-20th century technology encourages single-occupancy vehicles and discourages transit, pedestrian and cycling options.

For less than half that amount of money, Columbus, Ohio plans to completely re-think and re-design its transportation system.

Columbus beat out six other finalists for the Smart City competition sponsored by the federal DOT to receive $50 million to develop Columbus into the nation’s proving ground for intelligent transportation systems. The innovative competition encouraged cities to reshape their transportation systems, harnessing the power of technology, data and creativity to re-imagine how people and goods move throughout cities.

With additional private funds, Columbus will use $190 million to support driver-less vehicles and access to electric vehicle charging stations, and will enable cars and transit to communicate with traffic signals and other transportation infrastructure.

The finalist cities demonstrated vision and creativity in developing meaningful plans to use technology to improve the lives of their citizens and create a truly smart city. Think what we could do if we spent even half the cost of a new bridge for innovative transportation projects that would benefit the entire community.

Come on — we can do better!

But as with the notion for a streetcar across the Union Street Railroad Bridge, the alternative being pitched will likely be an overengineered and expensive solution whose return on investment will underperform.

It's important to underscore agreement here with the two main ideas about waste and harm in the Third Bridge and about re-thinking and re-designing our standard suite of mobility options. But it's the techy details. We're quibbling on the details.

The Smart City project is also an experiment, it must be said. It doesn't have to succeed in total to have incredibly useful elements. And indeed failure in some aspects will also have great heuristic value. If Columbus can rule out some options or ideas, that will be very useful at the Federal level and for other communities. In that regard it's not just investing an an experiment for Columbus. So, again, this is not criticism of the overall goal and the point of criticizing 20th century solutions.

But before we get all excited to duplicate it in Salem, we have to remember the Columbus project still operates in the autoist paradigm and probably places too much faith in complicated gadgetry and tech.

There are important reasons to be skeptical of many particulars in the Columbus project. Robot cars take the same amount of space, for example. Sure, on the highway it will be possible to pack them in a little tighter, but not so much in the urban environment.

No matter how much technology enables Columbus to double and triple down on the autoist paradigm, there are still very stubborn basic facts of geometry.

It will always be more efficient for transit and biking and walking to move people in confined urban spaces.

Salemites should not be dazzled. Salemites will be better served by improved investment in "transit, pedestrian and cycling options" than by investment aimed at "support[ing] driver-less vehicles and access to electric vehicle charging stations, and...enable[ing] cars and transit to communicate with traffic signals and other transportation infrastructure." Options for walking and biking, especially, are cheaper and more resilient. After the big earthquake, the high-tech cars won't be very useful. Contrarywise, parts of the city focused on lower-tech walking and biking will be very useful indeed. 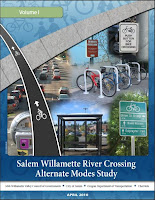 Tech will be helpful, but it will not solve everything. A certain, well, almost Luddite skepticism is in order!

Out of the trial will come useful findings, but it is likely they will require revision and iteration for successful application elsewhere.

Let's cheer on the experiment, but let's not be in a rush to duplicate it.  While we "wait and see" there are plenty of opportunities and proven tools for urban walking, biking, and transit. Several recommendations already exist in things like the Salem River Crossing Alternate Modes Study, the Downtown Mobility Study, and Bike and Walk Salem. We should fund and implement these first before we go chasing after new-fangled tech layered onto 20th century autoism.

For more detailed criticism of Columbus, see here and here. The National Association of City Transportation Officials also just released some guidelines on robot cars.
Posted by Salem Breakfast on Bikes at 7:00 PM