Send a Selfie to SBBA; SCAN asks for Safety - Newsbits

In a way that rhymes more than a little with the "This Place Matters" campaign by Historic Preservation Advocates, the Bike Boulevard Advocates are looking for folks who want to say "I Matter" when I am on my bike.

Because the way we build roads most certainly sends a message that you don't matter very much when you are on your bike!

After piloting it at some events, yesterday online they started recruiting folks to send photos and selfies with "I'm the 60%" signs.


SBBA continues to advocate for investment in roadway projects that help the 60% of citizens who would be interested in riding their bikes, if only they felt safer.

These riders are often hard to see because they stick to quiet side-roads, paths in the park, or (for now) leave their bike at home entirely.

Please help SBBA capture a sampling of the real 60% in Salem by sending us a photo telling city leaders: “I’m the 60%!”

Send your photos via Facebook private message or by email to bikeboulevards@gmail.com

We’ll include them with others in an upcoming slide show.

Snap a picture of yourself and send it in! 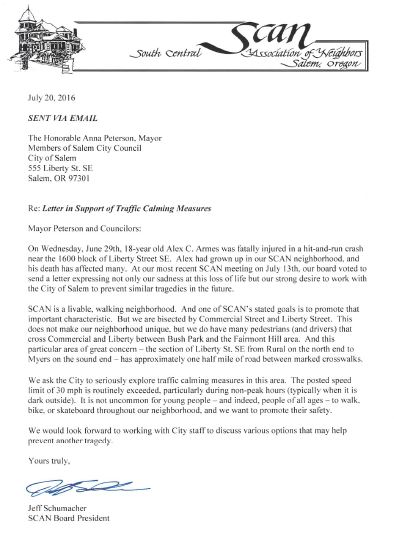 The South Central Association of Neighbors has sent to the City a strongly worded request for more traffic calming and safety on the Liberty/Commercial couplet near Bush Park.

On the 20th of this month they wrote:


On Wednesday, June 29th, 18-year old Alex C. Armes was fatally injured in a hit-and-run crash near the 1600 block of Liberty Street SE...

SCAN is a livable, walking neighborhood...But we are bisected by Commercial Street and Liberty Street...this particular area of great concern...has approximately one half mile of road between marked crosswalks.

We ask the City to seriously explore traffic calming measures in this area. The posted speed limit of 30mph is routinely exceeded...It is not uncommon for young people - and indeed people of all ages - to walk, bike, or skateboard throughout our neighborhood, and we want to promote their safety.