New Setziol Sculpture vs. Pokemon's Bestiary and the new Flaneur

Liberty and Trade is a pretty empty intersection. Clockwise from the southwest there is the Fire Station, Bentley's with the corner entry now closed, a parking lot, and Mill Race Park. There's very little activity except for cars, the four lanes of Liberty going north and the two/three lanes of OR-22 going west. There are no meaningful strorefronts or foot traffic attractors on the corners. Any storefronts are recessed, about a half-block from the corner itself. Within a block or so, there is more parking lot than anything else. The intersection itself and adjacent land uses are intensely car-oriented. 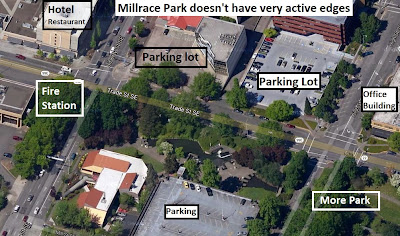 So it's an interesting move to put in a new sculpture here.

Over at Salem Progress they say a bit breathlessly


A new outdoor sculpture arrived in Salem today! A remarkable stone carving by Leroy Setzoil. Congratulations to Salem for becoming the home of this wonderful piece. Congratulations to the Oregon Artists Series Foundation, (OASF), the City, and the Salem Public Arts Commission for bringing vibrancy to the downtown. This is Salem Progress, Salem moving forward....

Another great improvement happening in Salem because of focused energy, selfless partnering, philanthropic vision and a crew who goes all in with great heart!

You probably will recognize Setziol's wood carvings from the library, where there is a large wood carved screen by the current periodicals display.

From here, though, the installation exemplifies our fondness for an ornamental emptiness. The location is a grassy spandrel, a void in the park's path system we are ornamenting and thereby hope to make more interesting. (Did you know the area has a name, Millrace Park?)

By itself, ornamenting this corner is not going to make it active. The new stone and gravel bed will be a novelty for a while, but soon it will fade into background noise.

In a more contemplative setting, it might evoke a Japanese zen garden, but the rivers of cars will neutralize much of its charm and interest. It seems like it's a little wasted here.

And how much "vibrancy" really is this going to add to downtown.

Until we are willing to think through more deeply our autoism, the way it degrades public space, and are more willing in public art and public space to alter carspace, it's just fiddling on the edges.

But you may have noticed a huge disturbance in the force over the weekend!

It seems possible that this pioneer example of augmented reality is an actual game changer (above and beyond the fact of it being a game) in the way and reasons that people move in public space.

If you want vibrancy, the clear answer seems to be the Pokemon bestiary! Apparently it's already shaping restaurant promotions.

At the same time, a certain Luddite critique seems warranted:


How far are we until your VR life is far more interesting, far more pleasurable, than your real life? Not that far, I bet. Maybe 10 years. How far are we until your walk to work is better with augmented reality than without it? Well, Pokémon Go suggests we’re already there. I’m not much for sci-fi dystopias — I don’t think the robots will kill us all — but the world of Ready Player One, in which the future has devolved (or evolved) into people escaping a grim existence by living inside their VR consoles, seems perfectly plausible to me.

It is premature to draw any firm conclusions from Pokemon Go and its successors. But it could be a real disruptor and innovator in the way we conceive of and manage public space.

Have you seen not just crowds but changes in the patterns of use in any public spaces you frequent?

And the augmented reality component could nearly institutionalize what some critics have tried to paint as dangerous "distracted walking." Will an epidemic of "distracted walking" actually normalize it and make us take more seriously the claim that people on foot have to public space, including the form we call a road?

No conclusions here - but so many questions!

Elsewhere there is additional action in the alleys downtown. On facebook a poster asked about "the rumored food cart pod being built behind JCPenney." A couple of weeks ago City Staff had indicated they were working on one in the plaza between the store and the parkade. So that seems on. In the comments to the post there was a lot of confusion about geography, and there also seemed to be a second food cart pod being planned for the alley behind the First Baptist Church (the block bounded by Commercial, Union, Liberty, and Marion). Others suggested one of the car dealership blocks to the north and northeast. So that's something to watch with interest for downtown.
Posted by Salem Breakfast on Bikes at 12:30 PM

For another couple of months there's a show at the Portland Art Museum!

A couple of weeks ago I took my two granddaughters to the Salem Library. We parked by Mirror Pond and walk around the area. We went down under the new bridge under Commercial Street. I was not surprised but dismayed that we were the only people enjoying the area. Not even employees from City Hall were taking advantage of the area.

You talk about vacant space a lot on this blog and I could appreciate what you were saying that day. I kind of wondered why I was not seeing anyone was there or using the path along the Millrace Park.

I came to two possible reasons: 1) something about the area makes you feel uncomfortable...maybe not safe; 2) it is hard to access.

Maybe if/when the path is connected to Riverfront Park people will walk or ride on the path. But maybe part of the problem is that as I thought about making the trip myself, it is because it feels hidden. I guess to some that is a good idea, but I have to think that this 'hidden' characteristic makes it feel unsafe.

I have no answer here, but it would be interesting to explore that issue.

I remember years ago, I took my children along this path....walking with a group of other mothers and their children...and it was wonderful. What has changed...other than I am getting too old to walk that far...?

I saw no real maps that would show the path and how it connects to Willamette University or Bush Park, so maybe that might be part of the problem. Maybe someone needs to organize a group ride event to help familiarize people with the area.

(Anon, thanks for the PAM link!)

I think qualities that orbit around the notion of "hidden" is exactly right!

1) it is recessed below sidewalk level and therefore hidden from casual passers-by; it requires a "special trip" or "destination trip" in that sense
2) there are no adjacent storefronts or other attractors; outside of 9-5 business hours, there is essentially no activity. even during business hours, City Hall is not such a hotbed of activity that it attracts many visitors, and the kind of visitors it attracts may not be very interested in a stroll
3) the boundary streets, the Liberty/Commercial couplet primarily, and one leg of OR-22 secondarily, are wide and busy and even with sidewalks remain intensely auto-oriented, acting as barriers from nearby blocks

Taken together these are the ingredients for a desolate space, no matter how much neat furniture and pretty plants we pile up in it.

As for a generation or more ago, these seem like factors:

1) The library remodel in the early 90s removed the main entry from the Peace Plaza side to the south side, and this sucked some amount of foot traffic from the northern half of the whole complex
2) There used to be a spray fountain in Peace plaza - where "the Probe" is now - that attracted families
3) Novelty, the allure of the "new thing."
Maybe there are other reasons as well.

(And all this is why putting the Police Station at the Civic Center and really reshaping Mirror Pond and Peace Plaza seemed like a good idea. The Civic Center needs more building and less campusy green in order to function effectively as an urban space. As folks consider the North Campus of the State Hospital, and other redevelopment projects, keep the costs of attractive low-density nothingness in mind.)

As a postscript - Thinking about the Setziol scuplture, I wonder if it would have been better served by placing it next door to the Fire Station on the west in that little southeast quadrant at Commercial and Trade - then it would have become an extension of the Sculpture Garden at the Conference Center and create a kind of gravitational pull across Trade under the theme of "art." Setting in it a larger lawn also would have given it more room to "breathe," which as a quiet sculpture it seems to need