It may not be possible to be definitive about anything, but even in the context of carnival surely there's a little irony in the way Salemites looked to a European model and celebrated a "monarchy" with a royal court on the 4th of July a century ago.


HARK YE! HARK YE! HARK YE! Loyal subjects of Cherry Land. You are hereby asked to lay aside all worldly care and abandon the pursuit of wealth for the next two days. Today and tomorrow your queen reigns supreme. Let the subjects of her realm devote their energies to making it a period of pleasure and enjoyment for all, great and little. From now until tomorrow night surfeit yourselves with pleasure and let joy reign throughout the land. Queen Estella so decrees and it is ordered by King Bing.

From the afternoon news on the 4th:

All Salem is gathered today at the state fair grounds. Most of Marion county is there too, judging by the throngs that besiege every sideshow, popcorn stand and dance hull.

By noon there were ten thousand people on the grounds and every street car and automobile was adding to the multitude. Only on special days at the state fair has the attendance been so heavy as today.

Queen Estella and the royal court were on the ground at 10 o'clock, where they were met by the Cherrians and the Cherrian band. The triumphal procession immediately got under way and a circuit of the ground was made ending at the reviewing stand to the north of the main entrance.

Red, white and blue bunting and flags garnished the stand where the patriotic events incident to a proper celebration of Independence Day were held. As the queen and her maids entered the stand the band played a flourish.

The Declaration of Independence was read by Judge P.H. D'Arcy after a few words calling the attention of the crowd to the significance of the occasion attending the promulgation of the document.

The speaker of the day was ex-senator Charles W. Fulton who took a patriotic theme as the subject of his address. Tom C. Orlemann and Mrs. Hinges sang a number of selections and the band did its share to make the program interesting to all.

Something went wrong with the balloon on its first attempt to take the air. Just a Queen Estella was ascending her throne the big bag, nearly inflated, broke its moorings and soared into the sky. In its descent it threatened to envelop the reviewing stand but the wind freshened up a bit and the balloon landed outside tho gate. A later attempt was successful and the aeronaut made a perfect landing with his parachute.

The two headed man, the strangest girl alive and the tattooed woman drew curious throngs. The younger element crowded the jitney dance hall and there were attractions for all no matter what one's peculiar preference.

Even tho small boy was not hampered by convention. The state fair board saw fit not to prohibit the explosion of firecrackers and the boys made most of the courtesy. Then, of course, there was a fight or two among the youngsters but no fatalities resulted.

Noon time found family parties gathered under every tree devoting their attention to the good things mother made before leaving home. The Indiana state society and various other organizations gathered to renew acquaintanceship and break bread together in the groves around the fair buildings. Programs of speaking and music were carried out in many in stances.

This afternoon the races occupy the place of honor. There is a good card and the track is in good condition. Vocal and instrumental music in the grand stand is assurance that no one is having a dull time. The Boy Scouts are giving exhibitions between the races, showing their training in first aid work and their ability in military maneuvers.

Tonight will be a big night. Early in the evening the old fiddlers will gather for the delectation of the crowd and the tunes of antebellum days will be the exclusive offering. Fireworks and dancing will bring Salem's Independence Day celebration to a close.

The more explicitly patriotic celebration noted in the paper was the ad for festivities in Newport, which seemed to be underwritten by the railroad.

Back to the current day, the kids parade in the Court-Chemeketa Historic District is pretty great - if you have kids and don't know about it, check it out! Parade starts at 11am today. 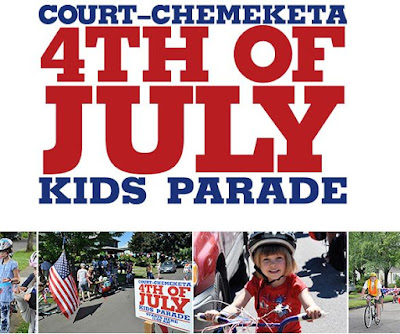 Thanks for this great post. I find it kind of saddening. It sounds like a century ago all of Salem got together for a free event that helped to create strong community bonds across all ages, income levels, education levels, races (?). What do we have like that today? Nothing. I guess we have to remember that in 1916 Salem only had about 15,000 residents. That makes a big difference, I guess. Still, our leaders should think about how we could recreate something like this in the future.