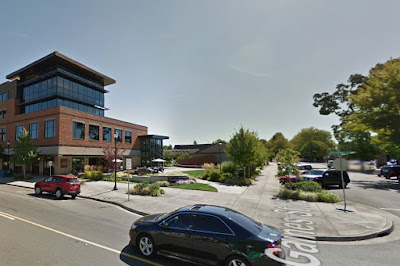 Even though it's privately owned (often called POPS for short) the patio and amphitheater at Broadway Commons is the best urban public space in Salem.

This summer they have a concert series early on Saturday evenings in it. (It started last Saturday.) 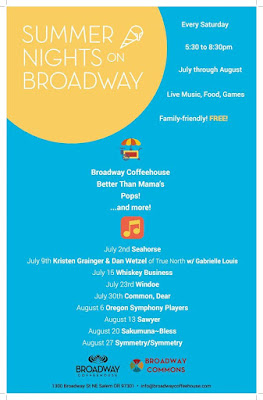 This Saturday True North will perform.

It's free and if you haven't been to Broadway Commons it's worth checking out as the kind of mid-rise urban development Salemites should embrace. As building it is walkable, and has storefronts in the the right relation to the sidewalk and street, with parking in back. The patio and amphitheater sit on the corner, just one block from Salem Cinema and Barrel & Keg, and function as sidewalk seating for the Broadway Coffeehouse. As public space it has active edges bordering both the street and the building. It's a winner!

(Hopefully the old laundry across the street will be redeveloped. This district has so much potential!)
Posted by Salem Breakfast on Bikes at 7:00 AM