Readers of BikePortland - as well as ODOT insiders of course - will know that they've been hiring some new "Active Transportation Liasons" for each formal Region.

Portland's Region 1 has had the services of Jessica Horning for a few years now.

Last week ODOT announced that Jenna Berman is the new Liason for us in Region 2 - a large and mixed area with the south half of the Willamatte Valley and coast: Marion, Linn, Lane, Benton, Lincoln, Polk, Yamhill, Tillamook, Clatsop, and a couple others. (Her start date was June 20th, so the announcement is a little delayed.)

Hopefully her work and attention will give more visibility and effort to greater numbers and higher quality of complete street projects for all road users and help to curb the entrenched autoism that dominates systems thinking and strategy at ODOT.

And that's a fine lead to tomorrow's OTC meeting.

On Thursday the Oregon Transportation Commission meets and one of the central items on the agenda is the Transportation Safety Action Plan. That has seemed already compromised, weak, and autoist, garnished with tepid language about "vision zero," but with little actual commitment to it. It's nice green parsley, but it's not a meal.

Hopefully groundskeepers and maintenance workers will not have scrubbed all the messages chalked in the pavers from Saturday. Advocates from Portland had biked down to ODOT-HQ and the chalked messaging was the only part that stood a chance of lasting through until tomorrow. ODOT was closed, the Capitol Mall was mostly empty, and the message had to reach the audience somehow.

At least some employees may have seen the chalk on their way into the building Monday morning. 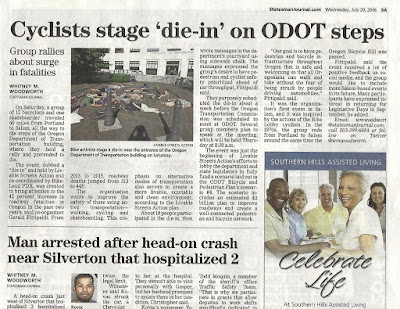 But as a "speech act," its main being might instead be as it lives on in the media. The article in the paper today might the only real way it could be seen by ODOT employees or Legislators.

Whether by design or by accident, it is a sad irony that it is immediately juxtaposed with a second headline of news about a crash that actually hurt people. (And then there's "celebrate life" - which if it wasn't an ad, would be a good reason to support active transportation and curb autoism. You can pile up layers in your interpretaton of the text here!)

The OTC has allocated 30 minutes to the Public Hearing and it is on the agenda for 9:45 am, Thursday the 21st.  (More notes on the plan here. Public comment is open through the end of the month.) ConnectOregon lottery funding is also on the agenda, but we don't have any local projects that were under consideration.