Long Register-Guard Article on Passenger Rail worth a Read 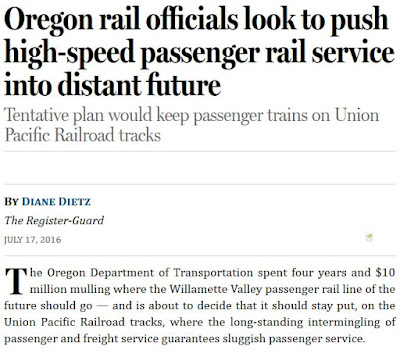 The Register-Guard has a nice longer piece on the prospects for improved passenger rail in the valley.

Several bits were interesting. One in particular was Congressman DeFazio going on the record with criticism of ODOT:


But the ­congressman said that Oregon has only itself to blame for the oft-clogged, single track rail line that ­carries both freight and passengers the length of the Willamette Valley.

In early 1990s, DeFazio said, Congress designated the valley for a high-speed rail route. Since then, ODOT officials have been mulling the issue, he said.

The Oregon Department of Transportation is a “turgid, dysfunctional” bureaucracy, DeFazio said, pointing to recent multimillion dollar contracting missteps. “They’ve got one person who does rail,” DeFazio said. “That’s not much of a focus.”

Later there's some on funding and our priorities:


Money to improve the tracks or add trains or any of the train-speeding strategies proposed by the rail leadership council will be a hard sell.

The federal government periodically doles out rail money, but it requires local areas to come up with a 20 percent match.

By comparison, the state has hundreds of millions of dollars, mostly from gas taxes, to pay for highway upgrades.

[Director of the Association of Oregon Rail and Transit Advocates, and Cherriots Board member Bob] Krebs said the state spent $750 million to add eight miles of a single freeway lane to I-5 at Salem. “For that you could almost double track all of the Willamette Valley,” he said.

The whole thing is worth a read.
Posted by Salem Breakfast on Bikes at 12:01 PM