Council meets on Monday, and you'll already know about the possible work session on the Salem River Crossing. (Which seems to have been scrubbed from Council agenda in the last day or two. The charitable interpretation is that the schedule changed or is not finalized. More cynically, it might be that the City errantly posted it and wants instead to withhold the information as part of the way it seeks to manage debate for a pre-determined outcome. It is also interesting that this fall may be consumed with debate on the bridge and debate on the size-large police station - is that a "divide and conquer" strategy by the City or is that an opportunity for community advocates to unify on a consistent theme about the perils of super-sizing?)

On the agenda is also authorization to pursue formal full applications for Federal funding in 2018-2023 for a suite of road projects. (They are discussed here and here in the context of the MPO's assessment of the pre-applications.)

The City has split them into two buckets of priority:


In general terms that seems pretty reasonable. The 12th street project is already in process and needs extra funding. It's too late for effective criticism on that. The bridge retrofit is urgent. Hilfiker is at Trader Joe's and Firehouse Crossing and the y-intersection with Sunnyside - and maybe it does need an upgrade. That's the one project I might slide out and swap with the 25th Street path. McGilchrist needs badly to be rebuilt and between freight and disabled veterans and brewery visitors, it may have the widest range of uses of any transportation corridor in the city. The Union Street bikeway is key. At any rate, it's a list on which there is a kind of clear balance and on which the proverbial "reasonable people can disagree." It is not a list that has great and obvious flaws.

There is a proposal to reduce the System Development Charges for Mill Creek Corporate Center.


Since 2006 when the [original] Agreement was executed, annual inflationary increases, defined by the Consumer Price Index, have been applied to the fee. As a result, the infrastructure fee has increased from $2.76 per square foot to $3.72 per square foot. While some system development charges have increased at a similar rate, not all have. This has created a significant cost differential between fees at the MCCC and fees elsewhere in the City.

It was the intent of the Infrastructure Agreement and Development District Order were to adequately cover costs for infrastructure within MCCC and keep the fees in alignment with the system development charges elsewhere in the City. However, since the infrastructure fee has escalated over time so that it is no longer in alignment with system development charges, staff recommends removal of references to annual increases. Instead, staff recommends that the Council and Implementation Committee review costs and fees annually. Additionally, staff recommends that the Council amend the FY 16-17 Public Works Fee Schedule to roll back the $3.72 per square foot to the the original $2.76 fee, which is expected to sufficiently fund future infrastructure projects.

I think this may be false. For example, at the last Council meeting:


The City has submitted a pre-application to the Salem-Keizer Area Transportation Study (SKATS) Metropolitan Planning Organization (MPO) for grant funding to interconnect traffic signals on Cordon Road SE and Kuebler Boulevard SE from MacLeay Road SE to the planned signal at Mill Creek Corporate Center. Staff plans to bring a report to Council in July seeking approval to apply for this and other transportation projects.

If the SDCs were adequate, it should not be necessary to apply for this grant. I know there are other examples of subsidy and grant-funded infrastructure for the area. Without diving in too deeply and trying to be exhaustive, here are four projects in the latest CIP that are associated with the Mill Creek Corporate Center and the immediate area. Only one of them has an SDC component in the funding mix, and the SDC is only for about half of that project. I feel confident that if we dove into previous CIPs, we would find others. 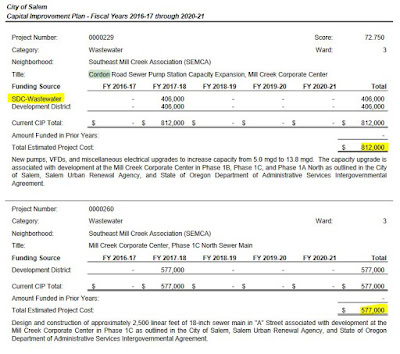 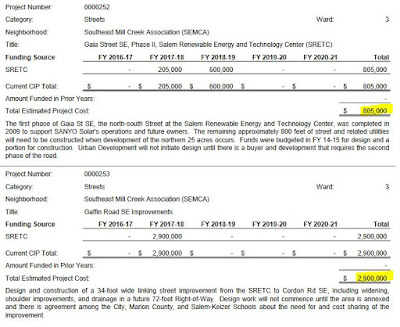 A few years back there was talk about pursuing a TIGER grant for "Gaffin Rd and Cordon Road: ~$12.3 mil" and there is the current OR-22 study and a Cordon/OR-22 project for a few ten million dollars. There is also a $6 million proposal to widen Gaffin Road "to minor arterial standards from Cordon Rd east to western border of the Salem Renewable Energy and Technology Center." That's nearly $50 million right there.

We have this strange mythology or over-simple analysis that SDCs are sufficient for funding infrastructure, but in many cases they are not. (Someone else will have to develop the argument in detail, but in general terms it seems clear: the scale of SDC revenue is not anywhere close to the scale of the total planned infrastructure investment. Crucially, it's not just the first life-cycle that matters - it's the maintenance and replacement in the second- and third cycles that add to our future obligations!)

This is an example of the way that shiny new development on the edges of the city too often sucks resources away from the center of the city and depletes our ability to maintain and replace important infrastructure in currently existing city areas.

Council also overturned the decision on the Red Lot's landscaping:

Finally, the City decided they needed to publish a "how to" guide for Council agenda. 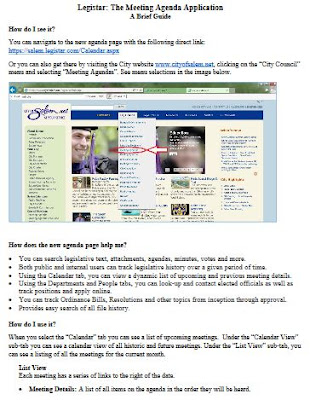 Has anyone else used it and found it easier to use than the old site and format? There hasn't seemed to be much discussion about it. (Previous thoughts here and here.)
Posted by Salem Breakfast on Bikes at 10:00 AM

Mark your calendar for Wednesday, October 5 when Chuck Marohn of StrongTowns.org will be in Salem for the whole day to talk about the Growth Ponzi Scheme and the way that our funding mechanisms work to trap us in the debt cycle you refer to above. He will be in Portland on Monday and Tuesday, and is adding Salem for Wednesday, brought to town by local community activists.