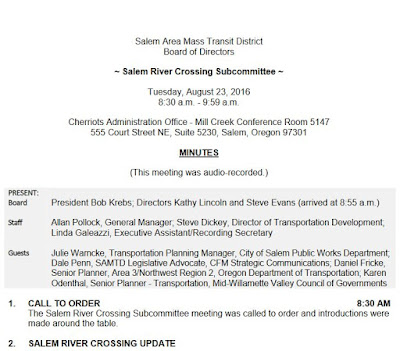 Tomorrow the 22nd the Cherriots Board meets for a light agenda, mostly of reports.

One of them is on the Salem River Crossing Board Subcommittee, who met last month. It is dispiriting to pick on Cherriots, who have already suffered the slings and arrows of outrageous fortune, but these minutes on the SRC suggest a neutralized Board, insufficiently critical and engaged on the costly, risky SRC and what would be the biggest infrastructure project in a generation.


President Krebs shared the Board’s concerns that the Alternative Modes Study needs to be implemented with the transit alternatives as well. One bus can take 40 people to a destination. It is not a huge infrastructure cost. Clover leafs at the end of the bridge might be a problem for the buses.

Mr. Pollock advised that the Board as a matter of record was supportive of the “Salem Alternative” as the preferred alternative but prepared a statement that was to be included in the SRC Environmental Impact Statement in order to avoid additional costs and design conflicts, advising that bus stop locations and construction should be coordinated with the District; and other supportive amenities such as park and ride lots, transit centers, bus queue jump lanes and transit signal priority were also to be considered as part of the design of the overall project.

Wait, does GM Pollock work for the Board, or does the Board work for him?

In all seriousness, what is in the SRC for Cherriots? What benefit does Cherriots derive from the SRC and its Preferred Alternative?

Maybe you will read this differently, but if there were benefits to Cherriots, it seems like they would emerge clearly and easily in discussion. Instead, it seems obvious that nearly all of the consequences for Cherriots will be negative ones. It's the costs, not benefits, that are highlighted.


Director Lincoln spoke about the amount of taxpayer money that would need to come from the community to put into the project for tolls, and bonds, a gas tax, and state and federal taxes to support the bridge. The transit district will be holding out their hand for its buses and service and the money won’t be there. President Krebs added that the District is stuck with the property tax limitation and pays a higher cost.

Ms. Warncke said that may change in ten years. Director Lincoln responded that it is still the same people that pay taxes and it will all be funneled into this project. Ms. Warnke agreed that the project was a high priority but it was not the only priority and it will be for the elected officials to decide.

Mr. Penn advised that Governor Brown has a large group looking at a transportation package for next year with three main tenants [sic] – transit, seismic and traffic congestion.

Director Evans said he was in Portland yesterday waiting in traffic for over an hour; making a ten minute wait in Salem seem insignificant. Mr. Penn noted that the Port of Portland is losing business using trucks because of the congestion.

Director Lincoln asked about the cost of maintenance for the bridge. Had that yet been determined? Ms. Warncke did not know if the bridge would belong to the City. At this point, the bridge is being designed. Mr. Fricke said this was one of those discussions that have not yet happened. The assumption is it will be designed at State Highway Standards and will not be a local bridge.

Mr. Fricke said this was one of those discussions that have not yet happened. The assumption is it will be designed at State Highway Standards and will not be a local bridge. Mr. Fricke said that he and Ms. Warncke go to all of the SKATS meeting and are usually asked to give updates to the SRC Policy Committee which they will continue to do.

Director Lincoln asked how the Board can review the Technical Reports. Ms. Warncke said the reports will be available seven days before the public hearing on the City’s website for land use records. [italics added]

Apart from citizen protest and critique on the SRC, Cherriots offers one of the best institutional wedges for critique. A good transit agency could offer a full-throated defense of transit's ability to reduce congestion, as well as to improve safety and livability. A good transit agency could drill independently into ways that the SRC may or may not offer benefits for the agency and for mobility in the city generally. It could offer the outline at least of an independent analysis. It could be a countervailing power to the dominant paradigm of hydraulic autoism at ODOT, SKATS, and the City of Salem. 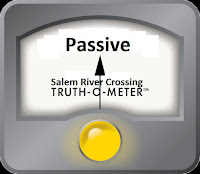 Instead, questions about funding the TSM/TDM recommendations in the Alternative Modes Study, the future maintenance obligation for a new bridge and highway, about the opportunity costs of funding a bridge instead of transit, about the lack of availability on the technical reports and ostensibly "public" process - these just get blithely deflected.

They are seemingly neutralized by a GM who insists "the Board as a matter of record was supportive of the 'Salem Alternative' as the preferred alternative" and who seems disinclined for any course-correction, or even much close questioning, however reasonable and justified. (You may recall also that Cherriots already made one retreat. See here for first statement on SRC and here on the retreat, formalized in that July 15th letter.)

In fact, the proposed Urban Growth Boundary expansion offers an excellent opportunity for Cherriots to make a course-correction and to reconsider their support for the Preferred Alternative. What do they have to lose? They got smacked in the November election last fall, so how could things get any worse?! Maybe a vigorous defense of transit, with the implied critique of the Chamber's anti-transit stance and a temporary hiatus on "playing nice," would galvanize the currently demoralized Cherriots user and fan base.

There is an opportunity here for a more principled, more assertive, and more deeply engaged Board!

In the Fiscal Year 2016 Annual Performance Report, they also report rider boardings are down 11.4%:


This is largely a result of the implementation of the Moving Forward Project on September 8, 2015. Some of the drop is the result of a decrease in transfers, and the rest is a real drop in ridership due to schedule changes, bus stop changes, and low gas prices. Staff does not have the tools to determine what share of the drop is a result of each factor

Cherriots seems captive to something, and they should shake themselves out of the daze of their Stockholm Syndrome.

Holy Smokes! Today over at N3B they report that with a unanimous vote, the Board passed a motion to


oppose the City of Salem’s current land use action to expand the city’s Urban Growth Boundary and amend the Transportation System Plan and to authorize Director [Kathy] Lincoln at the October 12th Joint Public Hearing on behalf of the Board of Directors.

At our SCAN meeting last week, a board member from the Salem-Keizer Transit District described their success in a program that runs an "express" bus route from the State Motor Pool parking lot off Airport Road (just west of Costco) to the Capitol. We were told this express route from the park and ride to the Capitol has been a success, and it is due in part to the subsidized bus passes that state employees can receive.

A question was asked about doing the same type of program for West Salem - that is, establish a central park and ride on the west side and have an express route that runs at peak times so employees can easily get to/from the Capitol area. The board member seemed receptive to that idea but seemed to think that Cherriots would need to find suitable parking on the west side.

It is troubling, at least to me, that the Transit District will put forward a ballot measure to raise funds for Saturday service instead of focusing on an issue that is consuming City Council. Why isn't the Transit District opposing the SRC, and at the same time suggesting its much more cost-effective role in reducing single occupant vehicle travel during peak times? Raise money to establish a central park and ride in West Salem. That argument would have a lot more political traction that trying to add Saturday service. I'm not opposed to weekend service, but doesn't it make more sense to offer improved services (i.e., express routes across our current bridges) at those times that will benefit the City the most? But hey, just keep rolling along with the SRC and it will be that much harder to get riders and funding in the future.

Interesting news from SCAN! Thanks.

For comparison on Salem's decline, Houston had a transit service redesign conducted by the same firm that did Salem's.

"From September 2015 (the first full month after the switch was implemented) to July 2016 (the most recent complete month), METRO saw its ridership on local bus and light-rail add an additional 4.5 million boardings — a 6.8 percent increase."

So that's a very interesting difference happening at the same time as the gas price falling.

More here at a Rice University post on transit.

Edit: Updated with news that Cherriots has taken a formal position against the UGB expansion!!!