Third Bridge at Parks and Recreation Board; Portland Road Crosswalks at NGRAB, Thursday

The North Gateway Redevelopment Advisory Board meets Thursday the 8th, and they'll be talking about the initial selection of candidates for enhanced crosswalks on Portland Road. 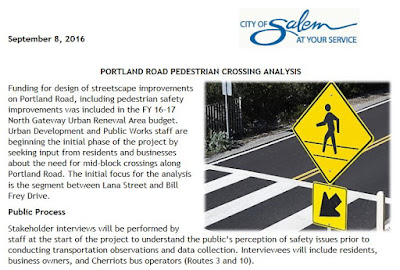 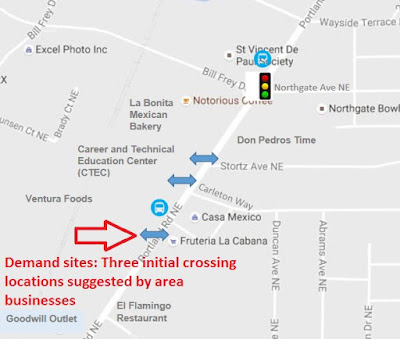 Some initial conversations with businesses on Portland Road has generated three candidates, at Stortz, Carleton, and one mid-block crossing further south.

It will also be a topic at the Northgate Neighborhood Association meeting on Tuesday the 13th.

Also on the agenda is the proposed low-income housing project for the Epping Parcel. (More on that here, including doubt that a large, homogeneous housing project, instead of smaller projects more distributed in mixed-income neighborhoods, is the best approach.)

The full agenda and meeting packet is here.

The North Gateway Redevelopment Advisory Board meets Thursday the 8th at 8:00 AM in the Center 50+, Classroom A, 2615 Portland Road NE.

Parks and Recreation Advisory Board

Also on Thursday the 8th, the Parks and Recreation Advisory Board is meeting. They do not yet have an agenda posted (they aren't very good about posting them in a timely way, actually). But a short City calendar listing says they will be talking about

Two of those are of great interest here.


While there was support to increase ways to walk, bike, and drive through the areas of West Salem, there were also some concerns centered around 1) how the proposed transportation routes would impact Wallace Marine Park and the western portion of the historic Union Street Railroad Bridge trestle; 2) routing the extension of 2nd Street NW over Wallace Road NW instead of under; 3) the bike/ped conflict and necessity of the dedicated right turn ramp from Wallace Road NW to 2nd Street NW with its associated impact to existing businesses.

Certainly topic #1 on the impact to the park and railroad bridge would be of interest to the Board.

On the River Crossing, one topic might be the need for a Goal 15 Exception. From the Land Use Addendum:

The preferred alternative and all of the Build alternatives evaluated in the DEIS would impact land and water areas protected by Statewide Planning Goal 15 (Willamette River Greenway). There is little case law interpreting Goal 15. Based on guidance from DLCD, the project team understands that a Goal 15 exception would be required for all Build alternatives to allow expansion of the existing bridges or construction of a new bridge and related transportation improvements within the Willamette River Greenway. Under state law, a goal exception is considered a plan amendment and this step must be completed prior to issuance of the final environmental impact statement (FEIS) and record of decision (ROD) for the Salem River Crossing Project.

The requirements for an exception to Statewide Planning Goal 15 are set out in the Goal and in the Oregon Administrative Rule for exceptions (OAR 660, Division 4).

I'm probably not going to wade into the Goal 15 matters - but maybe the members of the Parks Board individually or corporately will find the matter worth investigating. The Land Use Addendum does not discuss the heron rookery (the island is not even on Figure 4.4-9!), or any archeological findings that could be associated with a seasonal Kalapuya encampment. Over the past year N3B has been asking about these, and it is disappointing not to see them addressed.

The addendum's discussion does try to develop more in the way of other recreational, environmental, or scenic impacts. And it does once again draw out a spurious "benefit" for those on foot and on bike:


For the preferred alternative, the new bridge, and associated bicycle and pedestrian facilities on and off the bridge, would provide additional opportunities for views of the Willamette River, McLane Island, and Wallace Marine Park and riparian areas that aren’t available today.

The bridge would be long and dusty, full of highway speed cars - but sure, people will just love to bike and walk across it to check out the views. It'll be so calm and relaxing, indeed meditative. A real boon to enjoyment of the Greenway.

The Board meets the second Thursday of every month at 5:30 p.m. in the Public Works Department conference room 325 at the Civic Center located at 555 Liberty Street SE
Posted by Salem Breakfast on Bikes at 7:00 AM

Also - N3B posted a video of testimony from Grand Ronde criticizing the lack of a completed archeological investigation and calls for a pause until an investigation is completed.