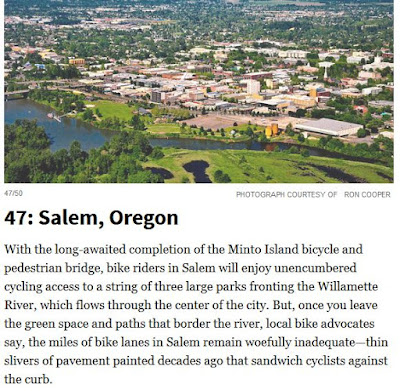 The good news is Bicycling Magazine still ranks Salem in the top 50 cities for bicycling. The bad news is we continue to fall in the rankings relative to other cities. This year we are 47th.

It's also a little hard to square a top 50 ranking with "miles of bike lanes in Salem...woefully inadequate."

The LAB renewal will come out soon - Keizer you may have heard submitted an application! - and it will be interesting to see how our "bronze" fares in that round of evaluation.

Both Eugene and Portland ranked higher than Salem on the Bicycling Magazine ratings - but not Corvallis, Ashland, Beaverton, or Bend, each of which is rated "silver" or "gold" by the LAB. Those are interesting omissions, though they may have missed a cut based on population size.

Also interesting in the piece:


In addition to its work on a greenway network, in 2016, Salem will strip its first buffered bike lanes on two downtown streets, and launch a bike share system in 2017.

Also not quite sure about the geographic accuracy here:


On the 132-mile Willamette Valley Scenic Bikeway you’ll pedal alongside the Cascade Mountains and the Coast Range, through the Cubanisimo Vineyard, which produces some of the best Pinot Noir in the country, and amidst the refreshing fragrances of pink and purple wildflowers. Make a pit stop in Salem, about 30 miles into the Bikeway, for shortcake topped with local berries at the E.Z. Orchards Farm Market.

These are puff pieces, and maybe it is unrealistic to expect close-to-the-ground detail.

But even if you still want to celebrate Salem's top 50 standing, it is also important to note that we are losing ground relative to other cities, who seem more eager to give bike transport and bike recreation a bigger portion of the transportation mix.
Posted by Salem Breakfast on Bikes at 10:30 AM