Nursing Home at Boise Finally to go Before Planning Commission

Hey look, it's details and a Hearing Notice on the proposed Nursing Home for the Boise Project! 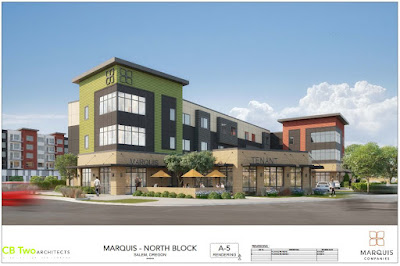 The Nursing Home's a done deal, it is what is is, and so even though it has seemed a really suboptimal use of the parcel, we'll stop complaining (mostly).

And in fact, right off, procedurally there's something very nice to note about the Hearing Notice. It's not a scanned image of a print out! It's a native pdf, and even though people grouse about pdfs, at least you can select text and embed links.

And even better, in it is embedded a link to the drawings.

That right there is a meaningful improvement on the way the City shares and publishes information. Maybe it will stick! (The other recently published notice is old-style and bad.)

So. What do we have?

Well, a lot of parking lot it seems. 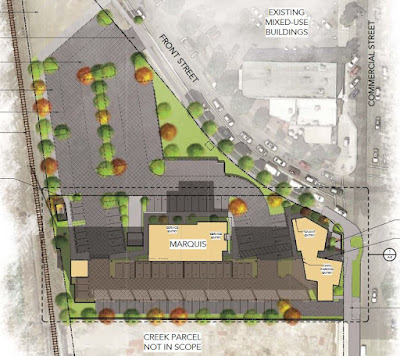 But note that the Nursing Home's footprint is the dark shadow in addition to the beige building, and a good bit of the parking will be open, ground-floor carport style (see elevation views below). The main axis of the building will parallel the creek and be oriented to that rather than to the streets or sidewalks. The north part of the parking lot looks to be shared with the forthcoming Triangle Building, so that's a mitigating factor. All that lot is not just for the nursing home, and the building mass is bigger than it maybe looks from just the plan view.

The corner at Commercial and Front is the one place where it fully engages the street and sidewalk. There will be a small public plaza and some greenery. The corner is zoomy as Front/Trade is part of the OR-22 system and we adopted a large turning radius there so cars could zoom unimpeded onto Commercial Street southbound. With Magoo's and the Conference Center's sculpture garden plaza on opposite corners there's potential, though, to create a more walkable place. If we are serious about wanting to knit a connection from the Conference Center to Riverfront Park, I still think this is a candidate for a scramble signal that allows crossing in all directions. The plaza's probably too small to be an independent gathering place and instead will be seating for a coffee shop or something - quasi-public rather than fully public. 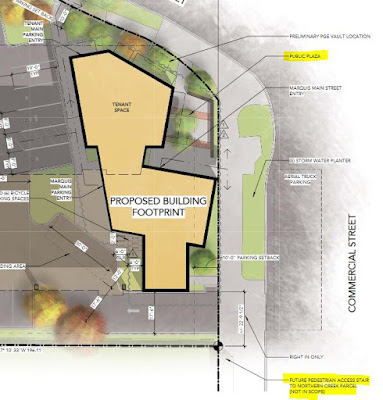 One hitch is that the public walkway along the creek is the lowest priority. So even if there were a scramble signal, it still wouldn't connect to the park in a direct or picturesque way.

Highlighted in yellow on the plan view above it says "Future Pedestrian Access Stair to Northern Creek Parcel." If you look on this elevation view looking northeast from the Commercial Street Bridge, near the person in the red jacket is the spot where there would be an access stair. 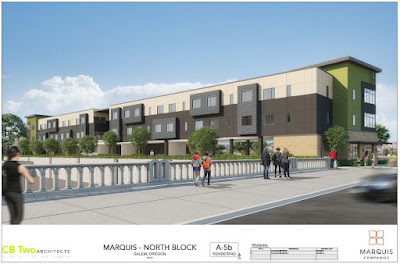 In the supplemental narrative by the applicant, the access and creek path is "planned as a future phase by others" and therefore "an easement at the south east corner of the development parcel does not appear to be needed." 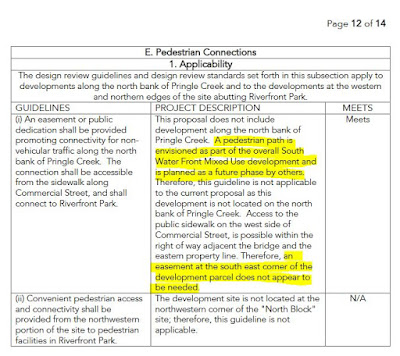 The fact that it's also envisioned as a stair only means that a cut will have to be made in the bridge balustrade and that the access will not be ADA accessible. That means the only ramp-accessible access will be from the east side of Commercial Street and not from the Boise property itself. Remember that the path on the south side, along the South Block Apartments, is already gated and locked.

The lack of access and priority doesn't seem right. The Nursing Home in particular is getting a $750,000 project grant in Urban Renewal Funds, and it is reasonable to ask if there is sufficient public benefit here. (Not sure that jobs for bedpan emptiers is quite the public benefit folks had in mind.)

Hopefully the City will give the phasing and possibility of an easement a closer look.

The building style looks to continue the idiom established by the South Block apartments and there will be a clear ensemble look - though it will be broken by the Triangle Building, designed by a different firm. Which is fine.

There are details to consider and even to criticize, but the big picture seems reasonable (again, it is what is is, and the decision for a Nursing Home is water under the bridge). Hopefully no big problems will be identified and the project can continue to move forward. It will be so exciting when the redevelopment is completed and it is just another part of the urban fabric.

The Hearing will be October 4th, and there will likely be more to say when the Staff Report comes out.
For previous notes on the Boise project and its different phases see here.
Posted by Salem Breakfast on Bikes at 7:00 AM