Open Houses: State Street on Wednesday, OR-22 and Mission Street on Thursday

The State Street study has an Open House on Wednesday the 14th. On Thursday is one for the Mission Street/OR-22 project. 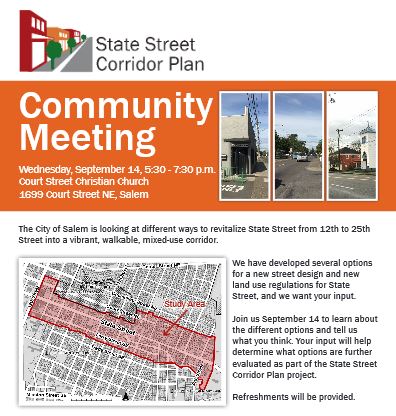 The public meeting for the State Street plan will be Wednesday, September 14th at the Court Street Christian Church at 1699 Court Street NE, Salem. The meeting, which will be from 5:30 to 7:30 p.m., will focus on different land use and street design options for State Street. Notes from last month's Stakeholder meeting are here and comments on the land use and street redesign options here.

Generally the Advisory Committee preferred concepts for the whole State Street corridor (as opposed of half of it) and for a road diet.

One moment in the Advisory Committee notes seems odd:


Parking drives the urban form. People tend to build as many units as they have the space to accommodate the corresponding parking. The proposed zones will require parking to be to the side or rear of buildings. There might be the opportunity to do tuck-under parking....

Parking is a problem downtown. People have a hard time finding parking. Residents are parking downtown and taking spaces that are needed by businesses.

Wait, what? Developers would like to build more units and less parking, right? Walkable urban forms can reduce parking demands. Our downtown parking garages operate at about 50% full at peak; there is plenty of parking downtown.

The notes seem to need some fact-checking! If these are opinions uttered by Stakeholders, why do staff and consultants not contest statements that are not true, however sincerely they might be uttered by one or more committee-members.

In the road redesign concepts right now there's a tendency to bail on the idea of bike lanes for State Street and instead shunt bike traffic to Chemeketa and Mill as low-traffic bike boulevard alternatives. But that would be a real renunciation, and people may be giving up too quickly on bike lanes for State Street. What if there's a business on State Street you want to visit? Is access by a side street sufficient? If you go to the Open House, be sure to give some thought to this!

The OR-22/Mission Street study will hold the final Open House on Thursday, September 15th, but it may be that there's a fundamental structural contradiction in it.

As long as we have an urban highway with highway speeds inside the City limits and, above and beyond the posted speeds, we tolerate routine speeding - how is it possible to create safe places for walking and biking?

What does it meet to have a crosswalk on a multi-lane road signed for 50mph? At Costco the 85th percentile speed is 48mph, so that means 15% of drivers exceed that routinely. At those speeds, a "casual" error by any road user is almost certain to mean death for a person on foot or on bike.

The posted materials are from the last Open House in the spring, so there's no way to assess what progress they have made.

Generally this is something of a contrast with the State Street study. Here there are
The Open House is Thursday, September 15th, 4 pm to 6 pm at Houck Middle School in the Commons Area, 1155 Connecticut St SE in Salem (1 block east of the Shopko/WinCo shopping center).
Posted by Salem Breakfast on Bikes at 7:00 AM

There can certainly be a perceived parking problem downtown. Driving into the downtown area, you can't see into the parking garages, but you can certainly see that every spot on the street is full.

Of course, this could easily be solved by putting meters back into that area, which would also lower congestion from people circling the block looking for a spot.