History Notes in and around Eugene Sunday Streets 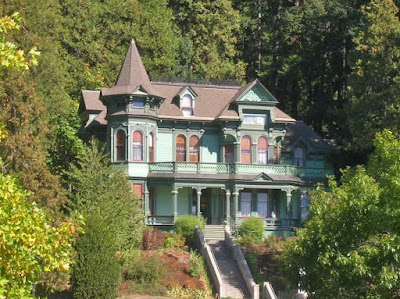 The close-in, gridded streetcar-era neighborhoods that are optimized for walking and biking also possess the best stock of older single-family houses, many of them lovely but ordinary, some of them grand or especially historic.

Change threatens real loss. The tension between historic preservation and infill redevelopment can be mitigated, but it is real. To make neighborhoods more walkable, to minimize the carbon footprint of neighborhoods, and increase the supply of affordable housing means necessarily that the texture of intact single-family residential neighborhoods cannot remain unaltered. Here in Salem we have seen how our Historic Districts have been created with withstand "encroachment," but it is increasingly clear that some elements of encroachment will ultimately be necessary.

Still, it is unseemly for a stranger to walk around town cheering upzoning without also thinking about why some might not welcome it. So even as it was interesting to consider upzoning in Eugene's close-in neighborhoods, it was also meaningful to consider what might be lost - and what already has been lost. Eugene has a rich history and, with the help of a terrific guide, it was by turns delightful and sad to think about it while walking and biking.

In a different historic district from the one on Blair Boulevard, just a few months ago a commemorative stele and plaque was erected at the two Mims Houses on High Street.


The Mims house, located at 330 and 336 High Street in Eugene, served as a refuge for countless African Americans who otherwise couldn’t reside in the city because of Eugene’s exclusionary practices in the 1940s.

According to paving stones set next to the stele, important entertainers like Ella Fitzgerald and Louis Armstrong had to stay there when they passed through.

Both of the Mims Houses are old, and one of them is also a rare example of a Gothic Revival. Eugene it happens has a few of them - more than Salem, which I think has only the David McCulley House.

Another terrific example of Gothic Revival is the A.V. Peters House on 10th and Pearl 16th and Lincoln.

These exemplars, now rare, have real value above and beyond their limitations as single-family dwellings, and it is right to wrap them with protections even when redevelopment makes sense.

One of Eugene's grand homes, The 1888 Shelton-McMurphey-Johnson House, designed it should be noted by Salem's Walter D. Pugh of our Old City Hall and the Grand Theater, sits on Skinner Butte above the Train Depot. It has an address on Willamette Street, but the obelisk the bikers are inspecting sits in a small roundabout that marks the terminus of Willamette Street. You can't get there from here!

Between Lincoln and Pearl there are no north-south crossings, and Skinner Butte, as well as the Shelton-McMurphey House, is cut-off from several real centers of activity in downtown, including the central axis of Willamette Street.

Eugene has several interruptions like that when some element of development creates a barrier in what seems like it ought to be a natural, axial kind of progression. The pedestrian mall was another one of these barriers, and there is still a pedestrian mall at the Hult Center. Considering that Willamette Street divides each of the city's avenues into east and west segments, it is bizarre that such a key axis would not be a full boulevard and offer full connectivity.

But perhaps the barrier at the roundabout is old. A streetcar map with routes active around 1910-1920 shows one on Willamette Street in red with a turnaround between the Southern Pacific (Amtrak) and Oregon Electric Depots. (You can see the tracks in that 1921 photo above. The map also shows the Blair streetcar and ones on 11th and Willamette. It will be interesting to learn if the meanders on the west side of the Green route point to any vestigial streetcar commercial clusters today.)

One corner store that seemed like it ought to have been on a streetcar line does not actually seem to relate to a route.

New Frontier Market is in an old building that has been remodeled into a corner grocery store. Apparently it started as a blacksmith and seed store when the area was essentially rural. You might think a corner store would be a convenience store, but it's not; they have organic produce, bulk foods, a small and well curated wine and beer selection, and operate more as a specialty grocer. It's great the neighborhood is able to support that.


One of the largest areas of R-2 [a medium level of residential density] zoning, in the Jefferson Westside neighborhood just outside of downtown, recently had a special area zone put in place that created limits on the ability to create missing middle housing within that area as well. Furthermore, it prohibits zone changes to C-1 community commercial—despite the fact that the New Frontier Market is a key example of the type of mixed use commercial that is appropriate in a walkable neighborhood, further neighborhood corner stores are prohibited under the special area zone. While it is easier to create lower-density missing middle housing, like twins and secondary dwelling units, in the Jefferson-Westside Special Area zone than it is in R-1 zoning, the ability to create medium-density missing middle housing, like triplexes and rowhouses/townhomes is blocked.

So, again, it's not possible to have an opinion about what is best or right here, but it is important to note that walkable, lower-carbon land use and development also requires nearby clusters of commercial services, like corner stores, and it will not alway be possible - or even desirable - to retain unbroken swaths of residential neighborhood fabric, historic or new. We want sometimes to argue that there is something "integral" about the unbroken fabric, but in fact is it an historic artifact of autoism, which allowed different land uses to be spaced much farther apart.

The Sunday Streets route was right by the old Masonic Cemetery, and there happened to be a concert in the mausoleum, part of their "Music to Die For" series.

The cemetery is not very tightly fenced, and has multiple access points. Bicycling is fine on the graveled main road, but not permitted on the bark mulch path system. There are bike racks!

Like Mount Crest Abbey at City View, the mausoleum was also designed by Ellis Lawrence. While Hope Abbey has not been expanded or altered the way Mount Crest has been, and the Egyptian Revival styling is a little more exotic and interesting than Mount Crest's classicism, it must be said that City View's setting is grander and altogether superior! Hope Abbey is crammed in a little on the side of the hill, and it doesn't have quite the same vista from the top of a small ridge.

Hope Abbey has its own National Register listing as part of the Masonic Cemetery, and that underscores reasons Salemites ought to value Mount Crest Abbey more than they do.

The Masonic Cemetery was also full of small single-page informational signs. Here is the burial of Mary Boise Spiller, was one of the first faculty members of the University of Oregon and the sister of our Judge Rueben Boise.

There are probably lots of other Salem-Eugene linkages like that!

Some signage like this could be very nice in our Pioneer Cemetery - but of course there's always the question of who will do it and how will it be paid for and maintained.


The Eugene Masonic Cemetery Association [formed in 1993] is a non-profit 501(c)(3) organization with a Board of Directors, a Cemetery Administrator, a Site Manager, and a Groundskeeper.

The streetcar map appears to show a segment of rail running through the northeast corner of the cemetery, and it would be interesting to see if there are any tracks remaining. Some of the houses on the back side of the cemetery appear to be aligned over former streets that now seem to be vacated - as if they had been on streetcar tracks a century ago.

As Envision Eugene unfolds, it will be interesting to follow it peripherally and to see in particular how they balance the need for lower-carbon, increased density in the walkable core, and the values of historic preservation in those same older neighborhoods.
First Part, with notes on Blair Boulevard, more on zoning, and Sunday Streets itself here.
Posted by Salem Breakfast on Bikes at 7:00 AM

Email ThisBlogThis!Share to TwitterShare to FacebookShare to Pinterest
Labels: Eugene, Other Bike Fun

Re remnant streetcar commercial: There are neighborhood commercial businesses (small restaurants, convenience stores both hippie and square, food trucks, and a few other walk-in businesses) at 28th and Friendly and at 19th and Jefferson on the west side of that green route. I never knew that there were streetcars that passed by those locations.

I am surprised now that there is no remnant commercial activity along the rest of the western sweep, at 24th or anywhere on Polk.

Ah-ha! Thanks for the news about 19th & Jefferson, and 28th & Friendly. Sometime on another trip they may be interesting to investigate!

(Edit: By email, a reader points out that the AV Peters house was moved from 10th and Pearl to 16th and Lincoln, where it is currently. Thanks for the correction!)