The Weather looks Great for the Peach Ride Sunday 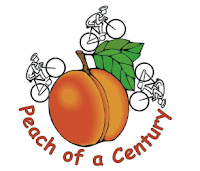 The Salem Bicycle Club's Peach of a Century Ride is this weekend, and if you are looking for a fun, but long, ride through the rolling Waldo Hills, the weather looks perfect - 75 degrees and "mostly sunny." That's Goldilocks weather for a bike ride, not too hot, not too cold!


Each route starts and ends at Chemeketa Community College. The full century route is challenging with some steep hills. The 76-mile route also involves a significant amount climbing. The Metric Century route offers flat to rolling terrain with some moderate hills. (See the GPS tracks for more information about total elevation gain on the routes, but note the differences in the vertical scales when comparing the route profiles.) The routes follow low-volume roads past the farm fields of the Willamette Valley, through forested foothills and rural communities east of Salem....The 100-mile route goes through Jefferson, Scio, Stayton, Sublimity, and Silverton. The Metric Century route visits Jefferson and Stayton. The 76-mile route visits Jefferson, Scio, and Stayton.

There are three rest stops on the 100-mile route and two on the 66 and 76-mile routes. All rest stops have food, water, sports drink, restrooms and the friendly volunteers of the Capitol Kiwanis Club. All riders must finish by 6:00 p.m. A sag vehicle will sweep both courses at day's end.

But it has seemed like there is a slow but sure drift away from these kinds of rides.

Earlier in the week we talked some about the drive-to-exercise model of recreation and fitness we have. In the bike world, one of the expressions of this is the big event ride sponsored a bike club or organized for a charity.

We used to have three of these in Salem. A few years back, though, the mid-summer "Watermelon Ride" was cancelled and the slot given to the Boys and Girls Club. They were not able to fashion a successful event ride, and so Salem now has two rather than three big summer rides.

The Club's early season ride, the "Monster Cookie," has had to contend with some early rains in the past few times. At the same time, numbers have seemed to be down more than proportionally for the weather. From the August Club newsletter, this year

Early registration for the Peach has also seemed to be down.

Meanwhile, over at the Oregon Garden, the Petal Pedal ride has seemed to successfully take the June calendar niche occupied by the Watermelon Ride. It is operated by a for-profit venture rather than a non-profit club, and is considerably more expensive, but also offers more perks:

Just a couple of weeks ago, in a note about a Portland store closure, BikePortland quoted the owner:


he feels the bike shop business is especially challenging these days. “The business environment is changing, online [shopping] is growing, a shop in town discounts everything and hurts all others. There is a big inventory of new bikes in Portland and the market.” [owner Gary] Wallesen said the triathlon market is particularly flat (pun intended).

He even shared one cautionary tale that might point to larger trends: “I think people are looking to ride, but the roads are getting more crowded and a little less safe. So markets that take riders of [off?] the road might be doing better.”

Overall, Wallesen says the issues he dealt with are likely impacting other bike shops. “Change is happening. I really don’t know who will survive. Our city is going through a shift.”

This is speculative and not anchored sufficiently in facts or deeply reported enough to merit firm conclusions. But when you survey the easily visible evidence, it sure looks like the market for recreational bicycling is meaningfully in flux. Event rides, perhaps no more better exemplified than Cycle Oregon, go up-market with fancy amenities. Unsanctioned gravel rides have no amenities. The Salem Bicycle Club has been occupying a middle zone with limited amenities, and it may be that this zone is getting squeezed in the market. It might also be that the allure of long road rides is limited. If you have a family, for example, 100 of kilometers or miles is almost certainly too much of everything. The whole "century" concept has limited appeal. After all, it was started in 19th century basically as an extreme sport by young men on fixed-gear bicycles!

Certainly the position here is that if conditions were better inside the city for bicycling, urban and utility cycling would be more pleasant and there would be less pressure for drive-to-recreate bicycling outside of the city. Bicycling would be more common, more widespread, but less heroic and explicitly fitness-driven.

But of course, there is no better way to see the countryside than by bike!

If the Bike Club, its weekly rides, and longer event rides are important to you, now is the time to "subscribe"! If new people do not participate in sufficient numbers, in a decade the leadership will have retired and we may be looking at a greatly diminished Club.

On the other hand, if the Club's activities do not engage you, then it is worth thinking about what other voluntary associations do meet your interests and are worth helping to institutionalize for on-going effectiveness.

A "gig" approach to projects, advocacy, and bike fun is certainly more flexible and responsive to changing conditions, but it's also more difficult for sustained action over time. To create enduring change seems to require building institutions.

Anyway, it's not possible to be definite at the moment, but it seems like the long event road ride is at something of an inflection point, and that's worth thinking about. (Do you have thoughts about it?)
Posted by Salem Breakfast on Bikes at 12:01 PM