The South Central Association of Neighbors meets next week, and there are a few items of interest: On the agenda itself is a talk about transportation and the Salem River Crossing; in the minutes from last month, and preparatory to a Council meeting later this month, are thoughts on a proposed property exchange involving the park at McKinley Elementary School. (And a few other things as well.)

Bob's talk will be a good one! He knows lots of stuff!

If you are a regular reader here, you may know about some of these things. The important part is to expose your neighbors to them. So to the meeting, drag your neighbor who drives everywhere or thinks we need a bridge!

The timing on the Salem River Crossing land use actions, including an expansion to the UGB, may not be structured to allow neighborhood associations sufficient time to analyze, deliberate, and draft a formal comment. The Staff Report may not be out until October 5th, and the "final" hearing is assumed to be the "first" hearing. Everything is compressed to minimize actual deliberation - it's conceived as a done deal, clearly.


Jim Scheppke raised a concern about City Council's decision to initiate land use actions for the Salem River Crossing Preferred Alternative as reported by Councilor Andersen. He noted that SCAN passed a resolution in opposition to the project several years ago. He suggested that SCAN draft a resolution that could be considered at the September meeting for possible adoption. He shared Bob Cortright's testimony to the City Council. The matter was referred to the Land Use and Transportation Committee.

Earlier in the SRC process, eight out of 18 Salem neighborhood associations had formally opposed what became the Preferred Alternative, and while at least conceptually that opposition ought to carry forward into the new round of Public Hearings and decisions, it would be better to give the neighborhood associations time to reaffirm or readjust their formal positions. The lack of time is a meaningful gap in public process.

(The City has a new website associated with the Land Use matters, btw. Blog posts on the Land Use issues are collected here. And N3B has still more.)

There are also some other matters of interest.

From last month, a resolution:


The South Central Association of Neighbors (SCAN) requests McKinley Park be deleted from the proposed transfer list. It is the only neighborhood scale park east of Commercial Street in SCAN. McKinley Park is a multi-purpose, multi-generational park space — a needed recreational area in our neighborhood. In 1973, SCAN formed, in part, to create this recreational resource. For 40 years there has been no significant problems. We ask you to please take McKinley Park off this exchange.

You can see the scope of the property in question above. Yesterday in a comment on a post about Council, Councilor Andersen said he would make a motion for the deletion at the Council meeting on the 26th. (There will probably be more to say then.)

There's some good news, too! In the minutes is a plan for the Vista Roth's parking lot. Roth's proposes to
Maybe there will also be a formal dedication of right-of-way along this strip triggered by the permits for the lot redesign. (A little further south, when the sports medicine clinic went in a couple years ago, right-of-way was dedicated.) But whatever the details are, it sure looks like Roth's is being a good neighbor in working to make a strip of land theoretically and actually available for a future improvement on Liberty (between Vista and Browning) for better bike lanes and sidewalks.

Other items to note in passing...
The South Central Association of Neighbors meets Wednesday the 14th at 6:30 p.m. in the South Salem High School Library, 1910 Church St SE. 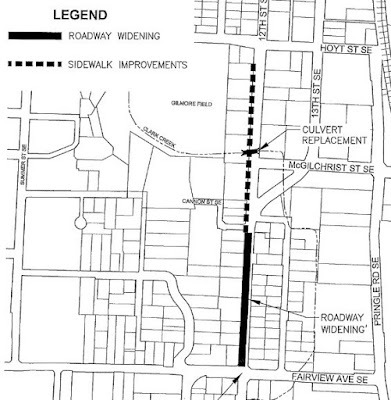 The City's holding an Open House on the 12th Street project for sidewalks, a new culvert, some new auto travel and turn lanes, and a few other things between Hoyt and Fairview.

It's a mixed bag: An entirely new sidewalk where one was missing, better bike lanes and stormwater management, but a new turn lane and greater auto through-put - and higher speeds.