You might remember a few years back that Portland Brewing/MacTarnahans had a summer beer oddly named "Grifter."

It wasn't a great image, the brand didn't stick, and the beer was retired after not too long.

But it turns out they were way ahead of the curve.

The whole constellation of words around the "confidence man" and the "spoils system" is ready for a revival, and a favorite here is "boodle."

Cartooning at the end of the Gilded Age, Homer Davenport and his work remain relevant, sadly enough.

The cartoons here are from the 1898 book, Cartoons by Homer Davenport. Many, or perhaps even all of them, have been reprinted by Gus Frederick. Maybe the rhyming history of our own Gilded Age and soon-to-be Banana Republic will renew a deeper interest in Homer Davenport, who grew up in the greater Silverton-Macleay orbit of the Geers and is celebrated by an annual festival in Silverton.


According to Frederick, "the original of this cartoon hangs in the Silverton, Ore. City Hall. It was donated to the City by Davenport's sisters Alice Davenport Bernard and Mary Delle Davenport Rose."

Boodle was especially associated with big city machines and the bosses. 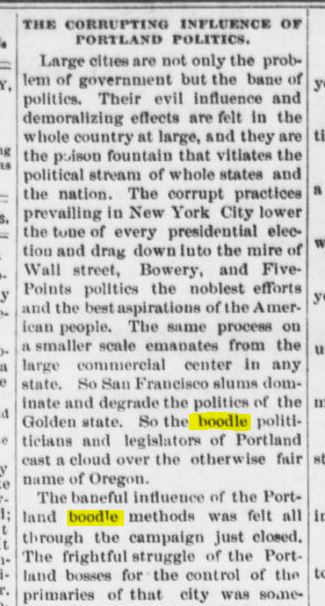 It is interesting both for the discussion of corruption and for the Jeffersonian anti-urbanism, so central to much of Salemites' self-identity:


THE CORRUPTING INFLUENCE OF PORTLAND POLITICS.

Large cities are not only the problem of government but the bane of politics. Their evil influence and demoralizing effects arc felt in the whole country at large, and they are the poison fountain that vitiates the political stream of whole states and the nation. The corrupt practices prevailing in Now York City lower the tone of every presidential election and drag down into tho mire of Wall street, Bowery, and Five-Points politics the noblest efforts and the best aspirations of tho American people. The same process on a smaller scale emanates from the large commercial center in any state. So San Francisco slums dominate and degrade the politics of the Golden state. So the boodle politicians and legislators of Portland cast a cloud over tho otherwise fair name of Oregon.

The baneful influence of the Portland boodle methods was felt all through the campaign just closed. The frightful struggle of the Portland bosses for the control of the primaries of that city was some thing that the people in the farming communities are not accustomed to. When politics degenerates into a strife for bossism instead of a contest for principle the cleanly voter takes his hands out of it and votes his convictions....

The center of a great farming community, as Salem is, must always be subject to more wholesome influences than a large commercial river city, where the lowest order of politics prevails, and where money is king at the polls....

I suspect sadly in the coming months and years we'll have lots of opportunity to use the words "grifter" and "boodle."

It won't mean exactly the same thing, but it rhymes in a lot of uncomfortable and possibly even dangerous ways.
Posted by Salem Breakfast on Bikes at 7:00 AM

At the risk of "debating ... people" I must point out that Salem has been the home of "boodle" politics for the past 14 years when the Chamber Area Chamber of Commerce, the Homebuilders and the Realtors have dominated the Salem City Council with their hand-picked mayors and councilors. The recently departed Daniel Benjamin is a case in point. He was hand-picked in 2014 and funded with a lavish $16,000 campaign, 93% of which came from the Chamber, Homebuilders and Realtors. He was unfit and unqualified, but he made a good waterboy for the past two years. Thankfully, the Chamber has suffered three defeats of their candidates since 2014. Next year half of the Council will not be in their pocket. "Boodle" politics in Salem is hopefully coming to an end.

Do you find references to the "whole kit and kaboodle?" I wonder if that's not a variant ...

Looks like Salem may be getting its own "boodle fights" -

"A year after launching her food cart, Marissa Luciano is preparing to scale up to a bigger kitchen. The Manila Fiesta is set to become the only sit-down Filipino restaurant in the Salem-Keizer area.

Leap Day, February 29, will be her final one as a vendor at The Yard Food Park. The Manila Fiesta restaurant will open at 1952 McGilchrist Street, the former location of Cherry City Cake & Candy Supply, nearby Santiam Brewing.

Most days, the restaurant follows a counter-service format.

On occasion, Luciano hopes to host special events including large, family-style "Boodle Fights," covering a long table with banana leaves and a variety of Filipino dishes. On these evenings guests will eat communally, using their hands instead of utensils."