This fall there has been conversation and debate about a proposal to save all of the buildings on the North Campus of the State Hospital. (More at Salem Weekly and Hinessight.)

No details other than a vague press release, however, have been released. At NEN the other day, representatives from the State shared an update and fact sheet from their perspective. Included in that update is a brief assessment of the proposal and an outline of why they did not accept it. 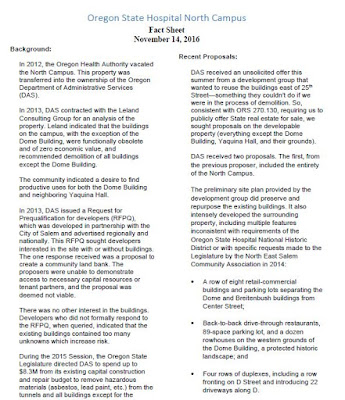 The assessment is one-sided, of course, all from the Department of Administrative Services side of things, but it is more detail than we have seen before. So it's a data-point, useful, but not perhaps conclusive. Still, it doesn't look like the proposal was compelling enough, and it looks like DAS had reason for not accepting it.


DAS received an unsolicited offer this summer from a development group that wanted to reuse the buildings east of 25th Street—something they couldn’t do if we were in the process of demolition. So, consistent with ORS 270.130, requiring us to publicly offer State real estate for sale, we sought proposals on the developable property (everything except the Dome Building, Yaquina Hall, and their grounds). DAS received two proposals. The first, from the previous proposer, included the entirety of the North Campus.

The preliminary site plan provided by the development group did preserve and repurpose the existing buildings. It also intensely developed the surrounding property, including multiple features inconsistent with requirements of the Oregon State Hospital National Historic District or with specific requests made to the Legislature by the North East Salem Community Association in 2014:
DAS conferred with the City of Salem Departments of Urban Development, Public Works, and Community Development and then we determined that the proposed development was far from buildable given the regulatory requirements of the site. Further, when the Dome Building (which was not offered for sale but was part of the proposal) and Yaquina Hall were removed from the proposal, the offer price was well below what DAS had already expended on hazardous materials testing, abatement and demolition design, and the beginning of hazmat abatement. The proposal simply was not viable.

The second proposal required demolition of buildings as a condition of closing, and the proposal reflected developer uncertainty regarding development cost for the site. DAS exercised its right under OAR 125-045- 0235(11) to reject all offers.

DAS will proceed with demolition of the buildings east of 25th Street. We will continue working with the City of Salem to streamline the development of the site through a traffic impact analysis, phased subdivision, and establishment of a development district. DAS will also be gearing up for a more extensive marketing effort in partnership with the City of Salem in early 2017.

Both proposals, with financial information redacted, were released to the Statesman Journal in response to a public records request on Wednesday, November 2. They were also provided to the Salem Weekly on Thursday, November 3.[italics added]

Look at those bullets! 1) The buildings and parking lots crammed in along Center Street, 2) drive-through restaurants, 3) driveways on D Street.

Seriously, if this description is at all accurate, how was the proposal an advance on the current demolition plan and possibilities for a redevelopment rich with "missing middle" kinds of housing and neighborhood scaled commercial elements?

By over-valuing the diseased and healthy second-growth trees, many of them non-native, and especially by over-valuing poorly sited existing buildings that also require a great deal of asbestos abatement and retrofitting for reuse, the proposal locks itself into an excessively autoist configuration with too many driveways on 23rd and D Streets.

In the absence of more detail, the proposal looks like it was suboptimal, like would have degraded the neighborhood, and that DAS acted reasonably in rejecting it.

DAS and the City of Salem should, however, share more detail on their analysis of it as "far from buildable," however. What does the City actually think is a buildable configuration? Are neighborhood fears warranted that it will be mostly parking lot with an archipelago monoculture of cheap, three-story particle-board walk-up blocks?

Even without reassurances from the City and DAS at the moment, the current plan to level and prep the eastern half of the property still looks like it has much better potential, even with cutting the trees and demolishing the four buildings.

The demolition will allow a more sensible street and circulation grid, both for cars and for walking and biking, and for buildings to greet the main sidewalks and streets in lively ways. In addition to using 23rd and 25th Streets, alleys should also be strongly considered for car access and car storage so that buildings can face the principal streets and sidewalks with minimal setback and D Street can be refocused for walking, biking, and a return of transit.

Even if the loss of trees and of the four buildings seems wasteful, we should not lose sight of a final outcome, and be ready to balance trade-offs in pursuit of a good project and end configuration.
Posted by Salem Breakfast on Bikes at 10:00 AM

Forgot to add quite some time ago...here's more detail on the rejected proposal, which DAS later published.