Council meets on Monday, and in order to accommodate overflow capacity, the meeting was moved to Loucks Auditorium at the Library. Subsequent developments have rendered the matter moot, and since we will be left mainly with the denouement on that civic drama now, important it is, it does not seem useful to have further comment here.*

Other things on the agenda really had not been important in that context, but now that they are bumped up, from here the principal matter now at Council is the set of proposed amendments to the West Salem Urban Renewal Area for the Second Street-Marine Drive extension and undercrossing.

The actual text of Exhibit 1 is very interesting. 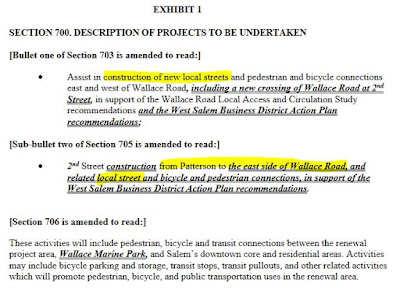 Marine Drive in the TSP is a mid-sized "collector street" and in the Salem River Crossing it has tended to grow even more and to become something of an expressway - though in order to secure assent, the SRC has in many ways exploited some ambiguity and traded on vagueness, sometimes acting like Marine Drive was just a collector, other times like it was an urban highway.

In these proposed URA amendments, Second Street is twice labeled a "local street," a smaller classification for neighborhood streets.

Secondly, the amendments discuss an extension of Second Street to Patterson only, and not a continuation east of Patterson into Wallace Park and then turning north to Glen Creek.

Thirdly, this avoids the troublesome matter of any demolition on the Union Street Railroad Bridge and trestle.

If there is no chicanery here, this could be a right-sized project worth supporting again. In important ways it seems to revert to an earlier concept and phase. (See here, here, and here.)

It will be interesting to see more discussion on this latest concept, but with these changes, it now seems like it merits support more than opposition or doubt.

Our alley renaissance means we need to adjust our sign code! Seriously, could an update to the sign code, usually a super annoying thing, be any more exciting?


Salem Revised Code (SRC) Chapter 85 regulates placing directional signs in a parking strip or other street area indicating a business district, industrial area, community center, church, institution, or manufacturing plant. Except as provided in Chapter 85, businesses are not allowed to provide signs located in the public right-of-way. However, in most cases, businesses have frontages along roadways that provide customers the opportunity to visually identify the business. This is not the case for a business with access only through an alley.....

There's an update on the Public Art Commission and they've apparently approved art for the Minto Bridge. It would be nice to see more in public about this! The Commission also issued a call for mural artists, but "Due to limited response, the Commission cancelled the Request For Proposal."

The first round - maybe the only round - of Legislative positions buries transportation in a larger discussion of "finance, revenue, and cost of service." While there is a tepid expression of "fix it first," and thankfully nothing about the SRC, there is also nothing about more assertively funding alternatives to drive-alone trips like walking, biking, and busing. The lack of detail shows where transportation reform currently fits. On the "environment," it only talks about drinking water, nothing about greenhouse gas reduction.

It also has a bunch of corporate pork:
-etc.- 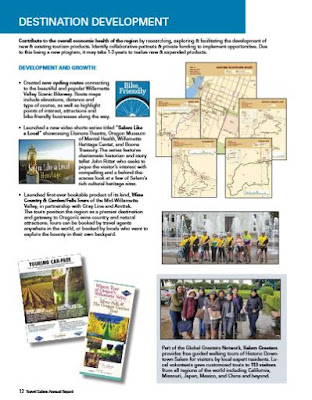 The package is still in the early stages, and there have been some missteps (see here and here), but overall this a strong move to celebrate and encourage!

* Crap. Spoke too soon. There's another KATU report - why are they rather than the SJ breaking these stories? - that some off-duty local law enforcement had nothing better to do than harass and troll a Hillary Clinton supporter, who doesn't even live in Salem. And our PD spokesman shrugs it off as "free speech." An SJ reporter notes that the "Oregon criminal justice code of conduct [says] 'I will keep my personal life unsullied as an example to all'."
Posted by Salem Breakfast on Bikes at 10:00 AM

(Updated with note about another instance of harassment. This is an alarming hint of a trend here. If you want to discuss it more, see the thread over on FB. I just wanted to note it as evidence that there would not be a denouement, and that harassment remained a live issue. But it's not something to dwell on here.)