Ride-Booking Companies as the Number One Mayoral Priority?

A little while back, a video with Mayor-elect Bennett was making the rounds.

The video's supposed to be light-hearted, and so we shouldn't place too much stress on it. At the same time, it ostensibly offers a statement of Mayoral priorities, and so it's not something to ignore completely.

The council-related events of last week overtook it, though. Maybe now we can revisit it a little.

Just overall, this thing about conducting interviews in cars is a little disturbing. As a pop culture phenomenon, carpool karaoke and its successors is amusing - but let's be clear that it's also a formal instance of distracted driving, no matter how careful is the driver.

Again, it's meant to be light-hearted, but this style and form reinforces our propensity for dangerous driving, and suggests driving is no big deal, that drivers can conduct any number of other activities while driving. There's nothing outrageous here, it's important to say, but it very nicely expresses our current norms and cultural expectations for a certain inattentiveness on the road. This is normal, banal, perfectly acceptable autoism. But it's actually dangerous.

As for substance, the Mayor's number one priority? Uber.

Frankly, that's a little bizarre. Of all the things to say as number one, that's it???

Salem said "no" to ride-booking companies for genuine reasons.

But the ride-booking companies want to frame it up as municipal misbehavior. Look at the tone here.


Uber came to Salem then left because the City of Salem would not play by Uber's rules. It's time we make the minor changes needed to bring Uber back.

That's an interesting read. "The City of Salem would not play by Uber's rules."

Even if you think Taxi monopolies are sometimes and in some ways problematic, there are regulations because of real needs that go unmet in too-free of a market.

From a recent study published by the National Bureau of Economic research:


Passengers have faced a history of discrimination in transportation systems. Peer transportation companies such as Uber and Lyft present the opportunity to rectify long-standing discrimination or worsen it. We sent passengers in Seattle, WA and Boston, MA to hail nearly 1,500 rides on controlled routes and recorded key performance metrics. Results indicated a pattern of discrimination, which we observed in Seattle through longer waiting times for African American passengers—as much as a 35 percent increase. In Boston, we observed discrimination by Uber drivers via more frequent cancellations against passengers when they used African American-sounding names. Across all trips, the cancellation rate for African American sounding names was more than twice as frequent compared to white sounding names. Male passengers requesting a ride in low-density areas were more than three times as likely to have their trip canceled when they used a African American-sounding name than when they used a white-sounding name. We also find evidence that drivers took female passengers for longer, more expensive, rides in Boston. We observe that removing names from trip booking may alleviate the immediate problem but could introduce other pathways for unequal treatment of passengers.

The wild-west of "Uber's rules" poses some real problems, and it wasn't so much that the City didn't want Uber, but it was that Uber was unwilling to play by the City's rules that are meant to ensure safety and fairness.

Some of the important questions that remain involve background checks, insurance coverage (people walking and biking are especially vulnerable in the coverage gaps Uber wants to see), and safety inspections. (Others have raised questions about the contractor/employee ambiguity and wages, and the ways the companies don't always share information they are supposed to.)

There are also questions about how big really is the demand in Salem for ride-booking alternatives to taxis. The experiment for flexible transit in West Salem has not generated big numbers, it should be noted. (Those who object to bike lanes make the same observation about demand - but bicycling offers many social and environmental goods that ride-booking companies do not. If, as the economists say, the externalities of bicycling are all positive, and the externalities of driving are negative and demand pigouvian taxes, even if present demand for bike lanes is not high, we should want to incent more demand. The opposite is true for driving.)

Additionally, drivers tooling around while waiting for a fare are certainly not reducing the number of cars on the road. Ride-booking companies may help reduce car ownership and perhaps also demand for parking, but they do not necessarily reduce the number of car trips.

Ride-booking companies would be nice to have, but not as the bull in a china shop. They should be more willing to play by the City's rules, not the other way around.

Salem should work towards figuring out a framework in which ride-booking alternatives to taxis can flourish.

But it's far from clear that this should be the number one Mayoral priority and that Salem needs to be the one to should back down on all of the requirements.

Bennett's next priority for a two-way State Street is promising, but at least in the edited video, little time is spent on it.

But that's actually a project for downtown that is worth a high priority! Bennett should have led with that and they should have talked about it a lot more.

Conversation about the State Street project then segued into a vague reference to bicycling - and then a "squirrel" shows up.


I want a two-way state street. It's our connection, I think, to the park.

What are your thoughts on a more bikable Salem. Salem is already very bikeable.

I've been one of the real proponents of it over the past nine years. It's gonna be really exciting what's going on. [Squirrel!] Comedy...

I worry that we're talking here about a two-way State Street and about bicycling as emblems of being up-to-date, and not as fully considered commitments or interests. The rhetoric may be working at the level of symbol only rather than policy. And to go back to the point about distracted driving, it is difficult to square a real concern for bicycling with so much distraction and amusement in the car. (Also, the SRC has been going on for nine years, and it will harm bicycling in Salem far more than whatever has been done in Salem over the last nine years.)

At the end of the video, there's an amusing attempt-slash-skit to use the Mayor to get out of parking tickets, underscoring ideas about access to power and the expectation for free parking.

The video has a thorough-going autoism. It's not just that the conceit of a drive-along chat occurs in a car, but that nearly every topic is fundamentally shaped by autoism. Even the talk about homelessness* occurs in a armored, sheltered vehicle, with a certain level of income assumed, enough for recreational driving, trips to the coffee shack, and jokes about paying parking tickets.

You might say this is taking the video way too seriously, squeezing out meaning where there is none or there is just fun. And there is some truth to that. But it also offered up a kind of statement of Mayoral priorities, and it is worth therefore taking it seriously also.

* Over at CANDO, they've been strong critics of the Homelessness Task Force and there are very strong questions, again, about whether the rhetoric is meant to operate only at the level of symbol or is meant to lead to meaningful policy actions.

Also, for a strong contrast with the autoism of the Mayoral video is this new smartphone ad. 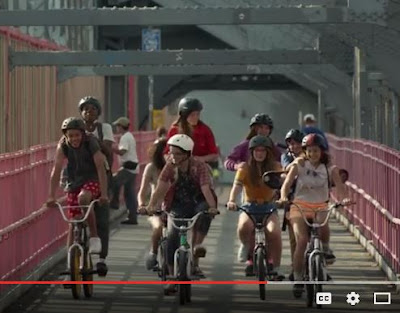 But it's really a bike ad!

It's not the smartphones that make this "a perfect day," it's the bikes, the independence, and mobility they offer kids. The smartphones are really just a secondary prop.


The Pixies cover is more than a little underpowered, but the joy on bikes? Right on. Maybe we'll come back later and discuss the ad in more detail, as it also is an interesting cultural text.
Posted by Salem Breakfast on Bikes at 7:00 AM

I believe the solution for Salem doesn't exist yet, although other places are nibbling around the edges with "public option" peer ridesharing network -- which I believe could be done through Cherriots if the board could have the vision of defining itself as a mobility service for people rather than as a bus company (that is saddled with a crippling ADA obligation that really should be borne by the state DOT, rather than just the transit districts -- but that would be a whole other conversation).

The not-all-that-flexible service in West Salem shows that this is a chasm that can't be crossed in stages -- once people feel compelled to have the car, they're gonna drive it, because economically it makes no sense not to. The purchase and insurance costs are so big, the variable costs so small. Once you kill weekend transit, you really erode your market by making it impossible for people to rely on transit. As you have pointed out yourself, people cannot even get home from meetings about the giant boondoggle bridge if they don't drive.

If Cherriots could see fit to leave the bus company only mentality behind and redefine itself as a mobility service provider that uses a range of options (fixed route buses with professional drivers where demand justifies, peer-network rideshare arranger where not), we could help people make the momentous choice to decide that they can do without the first or second car entirely, because they will always be able to get a ride.

Having a public entity build the app and help write the rules for service and fairness and doing the QA on the drivers takes away a lot of the problems with Uber/Lyft.

Heck, there's no inherent reason that Cherriots couldn't even tiptoe into a public-option bike"share" (leasing) program in a partnership with Northwest Hub -- the point being again that helping people avoid the first or second car is critical.

There has been a new analysis floating around:

"A new analysis of Uber's financial data suggests the ride-hailing company is losing as much as $2 billion a year, with passengers on average only paying 41 percent of the actual cost of a trip.

Parsing a set of three private financial statements that were published on three separate occasions, Yves Smith of Naked Capitalism writes that its clear that for the year ending in September 2015, Uber posted $2 billion in losses on revenue of $1.4 billion....

Perhaps more alarmingly, Smith writes, is that Uber's passenger-based model, which is theoretically built to avoid overhead and reward drivers directly, actually pays for very little of the cost of each ride.

'Uber passengers were paying only 41 percent of the actual cost of their trips; Uber was using these massive subsidies to undercut the fares and provide more capacity than the competitors who had to cover 100 percent of their costs out of passenger fares.'"

Allowing ride-hailing companies to diminish transit and existing taxi companies is not in our city's interest.