Council meets on Monday, and for our purposes here, it's a light agenda.

So let's talk about the Police Station and the election results instead, since that'll for sure work its way back to Council, and remains an important matter.

Congratulations to the community advocates who, with so much less money than the Chamber and its PAC, successfully won the public debate for a more balanced and right-sized proposal. Well done!

In the paper's piece about the oversized bond measure's defeat, there is an odd note of uncertainty about next steps, though.


"City council will listen to what voters have said and ask: 'What are our next steps? Do we continue to try to make it our number one priority?'," Deputy Chief Steve Bellshaw said on Monday before the election.

He speculated that in the event of the bond measure's failure, the city would need to re-evaluate its next step, which could be assembling another citizen task force, coming back with a measure for a cheaper facility, trying again with a stronger campaign or temporarily abandoning plans for a new police facility to focus on other issues.

"There's always a risk of coming back too soon," Bellshaw said. "It'll be a tough choice."

There has been for a long time a template for a proposal that enjoys broad consensus support! 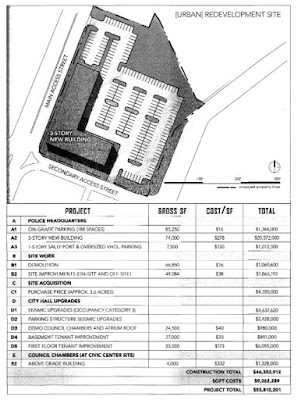 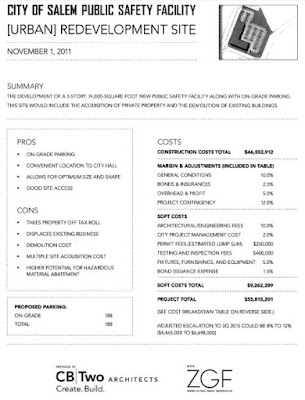 It came out in November 2011, and it has made periodic reappearances since then. Mostly it's talked about in a color slide from 2013, but it's been around for longer than that even. It had a local architect and a national architect attached. (This year Architect Magazine even named ZGF its "top firm of the year" and featured its focus on sustainability.) It was a serious, credible concept.

It should provide the template for a new proposal, updated and adjusted as necessary to include the necessary work at City Hall and the Library.

A couple of letters to the editor for the oversized bond talked about the value of public architecture and the urban fabric, and they're right. And a revised, right-sized proposal will still meet and express those values! (If it can be done, ditching the Chicago firm for Mackenzie, who I seem to recall having read somewhere was in the mix at one time, probably would lead to a design solution that actually better expressed those values in the Salem context, especially as it greets the sidewalk and in the public zones. If it is actually going to contribute to the urban fabric, it will need a certain porosity on the edges or some mixing zones, otherwise it will mainly be a bunker.)

It should not take a lot of time, it should not be necessary to lose the O'Brien site as one Councilor has suggested will happen, and it will be something to which everybody says "yes, please!" It will be easy for the citizenry to say "yes." Contrary to the straw man argument made by the Chamber and its allies, there is no meaningful opposition in Salem to a new Police Station. Everybody agrees it is important and urgent. People are eager for a project to say "yes" to.

Anyway, SCV and Salem Can Do Better will certainly have more on this. Councilor Andersen has also posted a statement to his facebook page about his interest in working for a revised plan.

Back to Council's Agenda

Maybe the most interesting item is a request by Mayor-elect Bennett for Council to sign-off on a junket to Boise to check out the downtown.


Members of Go Salem 365, a group dedicated to promoting the vitality of Salem’s downtown, have invited me and my spouse to participate in a fact-finding trip to Boise, Idaho on November 26 and 27, 2016. The objective of this trip is to:

• Visit another, similar state capital to review its downtown layout and revitalization efforts.
• To review development strategies in downtown Boise that may be applicable to downtown Salem.
• Review Boise’s street design for possible application in Salem.

A member of Go Salem 365 has offered to cover the expenses associated with this fact-finding mission. I have contacted the Oregon Government Ethics Commission to seek a staff opinion on whether acceptance of this invitation would be in compliance with rules surrounding gifts. Under Oregon Revised Statue 244.020(7)(b)(H)(i), reasonable food, travel or lodging expenses provided to a public official and an accompanying relative of the public official, are not considered gifts when the public official is representing a local government on an officially sanctioned trade-promotion or fact-finding mission.

I request the City Council’s official sanction for me to represent the City of Salem in this fact-finding mission.

First off, it's great to see this as a formal request. Maybe the recent ethics complaints, even when not sustained, prompted this and will encourage more of it.

Second, it's terrific that our Mayor-elect is interested in looking at the strengths and weaknesses in another similar city and making a comparison with Salem!

Sure it's a junket, and there will be pleasure involved on someone else's dime. But it's also potentially very useful, and we should want our elected officials to be interested in best practices and in failures from other cities.

So from here this request looks like a good thing. It will be interesting to see if others have meaningful criticism of it.

It would be good, though, to learn more about who all is going from Go Salem 365, what kind of report they will be generating, and when that will be presented to Council. If Council is formally endorsing this as a "fact-finding mission," then the found facts and analysis should be public, and not hidden away as Secret Go Salem 365 Lore. Maybe Mayor-elect Bennett will want to reserve 5 minutes at a future Council meeting to talk about the trip and present a slide or two of especially interesting findings.
Posted by Salem Breakfast on Bikes at 7:00 AM

Two architects from the Mekenzie Group were quests of the Police Blue Ribbon Task Force. What impressed me the most was that they said in their experience a good public building needs to have a good public process. They had just taken on the Canby police station project. They were called in to take over after a failed bond too.

Their first step was to host a public meeting where they asked citizens to share their ideas. Seems to me that Keizer did a similar thing when they did their police station/city hall.

The National Police Association handbook on how to build a new facility starts out with an outline for a process. Guess what is step 1? You guessed it. Begin by talking to the community and getting their input. First step...not last step, like was done in Salem. Mayor Peterson met for months in her inner office with select people. When some of us land use chairpersons asked what was happening, we were told, nothing here to see. Then one day, Geoffrey James was invited to her office where she and Linda Norris (then city manager) stood at her window and she pointed out all of the plans and told him how it was going to be.

Salem Community Vision was born within a couple of weeks. Our goal was to open up the process. Get what was happening out in the open. There was no other agenda. Let the people in, is all we asked.

Finally a page appeared on the City's website revealing months of meetings and thousands of dollars of consultant work. From there it is all history.

SCV is still advocating for a better public process. If the city does not take the lead, then the citizens will fill the void.

We will be coming out with our formal position soon. But it will not hold any surprises and will be based on what we have heard from the citizens who have shared their opinions.

Thank you for helping inform the public about this and other important issues!

As a member of the Police Facility Task Force I was impressed with the discussion with the Mackenzie Group. Those Portland architects have designed several affordable police facilities in Oregon. Instead of going to Chicago to find police space planning experts we have real talent here in Oregon. Let's use local firms that have shown us successful police projects in our state. We don't need to send millions (they charge 7% fee) to out of state firms. When "Plan B" comes out in the next week or two you will see a blueprint for Police+Seismic for about $20M less than the bloated proposal that just failed. Salem voters are smart. We know that a proposal for an $82M building that is the same size (148,000 sq.ft) as Courthouse Square is just wrong for our local police station that is trying to function in just 28,000 sq.ft. PLAN B corrects this, and we hope the new City Council will move in January to place this sensible plan on the ballot in May. Stay tuned for more details.

Thank you for your very informative blog. I am a frequent reader and commend you for your attention to detail. I remain a skeptic of SCV and those who lead it. They may have good ideas but they respect and listen to no one but themselves and have the tact of bacteria which is regrettable. The trip to Boise is important. Boise is a thriving vibrant city with many interesting planning innovations that Salem could incorporate. I look forward to what Chuck brings back to share. Please keep up your good work covering City Council. I enjoy your truthful yet fair coverage.

Memo to SBOB: I think the Amused bystander just violated your stipulation that "we debate policy and not people." Will there be consequences?