A reader sends news that at the Oregon Transportation Commission meeting in Eugene on Friday the 18th, they'll be getting an informational update on the implementation program for the new statewide walking and biking plan.

It's not very good. 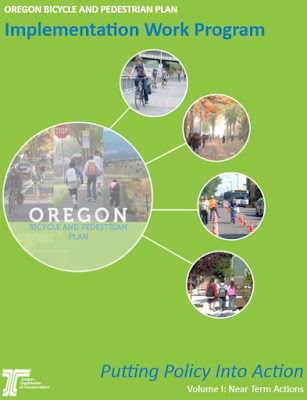 
ODOT has made some progress on many of the Action Items identified in this ODOT Work Program. Other near term Action Items will be started within the next five years as time and resources permit...

Over the 25 year life of the 2016 Oregon Bicycle and Pedestrian Plan, the timing of implementation strategies will be influenced by need, opportunities, and available resources. Whenever possible, ODOT will seek to leverage other work to make progress on Plan strategies.

It's all about reducing expectations - captured by the vague formula of "we've made some progress."

So basically, we won't pursue anything unless we can do it as part of something else. Biking and walking projects are always secondary, and should not be pursued independently as a priority valuable by themselves. We will not devote meaningful resources to building out walking and biking, but will wait until "time and resources permit."

In all that it is consistently second-class in funding and priority.

If you read the work plan you might find more to say about it. From here, the problems seem like a high-level and thorough-going consequence of structure and values, and not merely quibbles on the details.

The OTC meets on Friday the 18th in Eugene. If you like, you can send comment to OTCAdmin@odot.state.or.us
Posted by Salem Breakfast on Bikes at 7:00 AM