Why is Salem the Capital and Jeffersonian Anti-urbanism 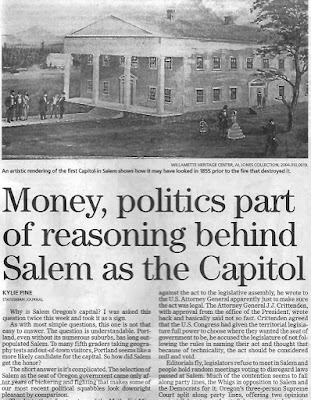 In the paper today there's a humorous recitation of the intrigue and maneuvering that went on to ratify Salem as the State Capital.


Why is Salem Oregon’s capital? I was asked this question twice this week and took it as a sign.

As with most simple questions, this one is not that easy to answer. The question is understandable. Portland, even without its numerous suburbs, has long out-populated Salem. To many fifth graders taking geography tests and out-of-town visitors, Portland seems like a more likely candidate for the capital. So how did Salem get the honor?....

Despite Oregon City’s charms, the territorial legislature passed a bill titled: “An Act to provide for the selection of places for the location and erection of public buildings of the territory of Oregon” on Feb. 1, 1851. The bill named Salem the territorial capital, Portland as the site of the territorial penitentiary and Marysville (now known as Corvallis) as the site for the territorial university. It appeared pretty clear. Law passed, Salem is the capital, right? Except that being the seat of the government brings a lot of jobs and revenue to the surrounding community. Legislators and lobbyists need to eat, sleep, board their horses and, in the case of many early Oregon legislators, drink (a lot). Many communities realized the economic gains that could come from being the capital city. Cue the next decade of political infighting....

Finally, general elections were held in 1862 and 1864. Salem beat the next closest vote getter (Portland) by twice as many votes in both elections.

But one element of deep context may not be given enough weight here. These are the laws and votes and political actions - but not the values and motives behind them.

A while ago over on Facebook a person wrote:


Salem's lack of trust for government and seemingly a lack of pride in community come from never having local nightly news. I grew up in the Eugene area and we had 3 new stations reporting on everything happening in government, education and every other aspect of life in the southern valley. It created a sense of who we were. Salem has Portland news, it's no wonder our youth abandon Salem for the "big city" as soon as they have the ability. With that abandonment a void is created that we can not fill. We have no sense of place, no banner to rally around, seemingly nothing news worthy even though we are the same size as Eugene.

I think this is deeply mistaken. What Salem lacks vis-a-vis Portland and Eugene is not our own TV news, but is a large state university. Salem also lacks wealth, especially compared to Portland.

Salem grabbed every state institution, including ones for the "feeble-minded," the "insane," and the criminally guilty, except for any institution of higher education. Like it or not, that right there is a big statement about our historical municipal collective values.

Most of these decisions, of course, were made decades after the Territorial and early Statehood debates on the location for the Capital. But they are consistent with the early decision-making.

In key ways, Salemites have historically rejected, or been unable to claim, the state-level institutions that might foster cosmopolitanism and culture. Equally, those elsewhere in the State did not want to co-locate the Capital with those cosmopolitan institutions or with concentrations of mercantile wealth or wealth from natural resource extraction. Trade also fosters cosmopolitanism.

This provincialism is consistent with the way the Founding Fathers, especially those who became the the Jeffersonian Democrat-Republicans, generally conceived of state capitals.

From The Age of Federalism


At the time of the republic's founding there was little room in the American imagination for the idea of a metropolis as the mirror of a national civilization. On the contrary, the anti-urban, anti-metropolitan component of the Revolutionary mentality would prove to be one of its most persistent and durable features...The growth of cities in nineteenth century American would proceed without clear models in the American spirit for the pleasures and compensations of urban life; by the same token, a metropolitan capital as the matrix for the growth of a national society's self-knowledge was not available either. London or Paris did not perhaps could not, serve as the model. But if they had, the result would have contained at least three lines of force, all intersecting in the same place: those of political authority, of commerce and money, and of art and intellect....

When Jefferson sponsored the move from Williamsburg to Richmond in 1780, a clear precedent was set for a number of similar movements of other state capitals...Among them were those from New York City to Albany, from Philadelphia to Lancaster and then to Harrisburg, and from Charleston to Columbia. Indeed, virtually every state underwent some variation of this process. The pattern was invariably one in which the capital ended up in a more or less centrally located place, and not in the state's principal city. Any lingering commitment to the idea of a capital as a cluster of economic and cultural as well as political resources had at some point been left behind once and for all....The results have been curious. Not only did the country at large, by going to the Potomac for its capital, fail to acquire a focus for the national culture, but it would develop few distinctive focuses for regional cultures either.

A few, like Austin, Boston, Denver and Phoenix are real exceptions. Mostly our state capitals are secondary cities, like Salem. This has real consequences.

It's true that in 1860, Portland hardly counted as a "big city." Here are the census counts:

But it was still about three times the size of the second-biggest town. It also had the greatest economic potential in terms of water transport facilities. It was the clearest candidate to be a true hub for the movement of goods.

In answering "Why is Salem the Capital?" more attention needs to be given to why not the mercantile advantages of Portland? And some of the reasons we might think of for a "so-lame" or excessively provincial Salem are more-or-less consequences of the choices made to avoid a more cosmopolitan and merchant-oriented Capital city.
Posted by Salem Breakfast on Bikes at 12:01 PM

Same in Michigan, where they voted to put the capital in a place that was essentially not even a place at that point (Lansing was pretty much just a small clearing with no connection to any of the Great Lakes, which was then huge trade). Same in Wisconsin -- no to Milwaukee, the city with good waterfront trade and easy connection to Chicago. Speaking of which, Illinois put the capital in Springfield. Etc. Etc.