There's a cluster of interesting transportation items on Council agenda for Monday.

Most interesting is the report from the Crosswalks committee.


The City of Salem Pedestrian Safety Study was conducted in response to a spike in pedestrian fatalities in 2015. Completed in March 2018, this study evaluated the various causes of pedestrian crashes, identified trends and patterns, and developed a set of recommendations aimed at reducing the frequency and severity of pedestrian crashes. Among the recommendations from the study was for the City to develop a “Safer Crossings Program” (Program). The purpose of the Program is to establish an objective, request-driven process to evaluate pedestrian crossings and rank potential safety improvement projects at the crossings.

Staff worked with a Project Advisory Committee between October 2018 and February 2019 and developed 12 weighted criteria for ranking potential safer crossings projects. Once the Program is fully implemented, users will be able to propose crossing projects online and see how all of the submitted projects are ranked. The attached initial list of ranked crossing locations illustrates how various proposed projects scored relative to others. This listing also identifies which crossing projects are proposed to be included in applications for federal funding through the Salem-Keizer Area Transportation Study (SKATS).

Mostly the ranked list looks pretty good; maybe there will be more to say after we've all spent more time with it.

But one element, in a way a small and insignificant detail, but in another way a systemic problem, is worth comment.

Look at the weighted scores and the "signifcant" digits past the decimal point.

Now consider the scoring factors and their "significant" digits past the decimal point.

This is a farrago of false precision!

The projects should instead be tiered within margins of error rather than ranked to the hundredth decimal point. Creating a model is fine and useful; but the model is a simplification, it has a margin of error or uncertainty range, and we should express this in our final ranking.

This is the same problem we have with traffic modeling. It is symptomatic of what is wrong with the current state of traffic engineering and planning.

We've been talking already about the solicitation at SKATS for the 2021-2026 cycle, and the City proposes to formalize their applications. The City's priority:
The crosswalk sites in project #2:
As part of the Code update, there's a new round of revision on the bike parking requirements.


Subsequent to the May 13, 2019, public hearing staff further reviewed the proposed bike parking access standard and has identified further revisions to SRC 806.060(b) to address the concerns raised. The recommended additional revisions are included in Attachment 1 and reintroduce the language concerning curbs as barriers.

Under the recommended revision, bicycle parking areas are required to have direct and accessible access to both the public right-of-way and the building entrance; and the access must be free of obstructions and any barriers, such as curbs or stairs, which would require a bicyclist to lift their bikes in order to access the bicycle parking area.

The proposed revision will ensure barrier free access on the property itself, but does not, however, address bicycle access routes from bike lanes on the street onto a property. In order to address this issue, curb cuts would be required within the public right-of-way specifically for bicycles. Bicycle access from the street and onto properties can instead be accommodated by existing vehicular driveway approaches. Vehicular driveway approaches can provide a means by which a bicyclist can exist the street and move onto the property and the recommended revised bike parking access standards will ensure barrier free access to the bike parking area and the building entrance.

I'll come back to this, as the language about "vehicular driveway approaches" does not inspire great confidence, and instead suggests conflict zones.

There's an update on Our Salem. It is not possible right now to overstate the conclusion on cars and carbon. 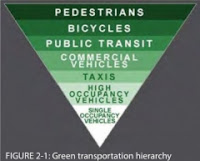 With the update is a new report. "Prioritizing Equity & Inclusion: Updating the City of Salem’s Comprehensive Plan," was compiled by Willamette students and is worth a closer read.

In it as part of the case study using Tacoma, they cited the "green transportation hierarchy." This is something that should get more visibility here, especially with Our Salem and the prospect of a Climate Action Plan.

Finally, there's a promotion for "Alley Days," and a bad set of names for them. This has not been fully considered.

(There are a few other items of interest, but not enough time this morning. Maybe tomorrow I will come back and add to or revise this post.)

You will recall the fatal crash on the Parkway at Cherry Avenue last week.

On the crosswalk list, that intersection is ranked as the seventh highest need.

The MPO is currently evaluating for funding a safety project here.

The project is primarily aimed at helping people on foot and on bike to cross the highway. But it might also have ancillary benefits for those in cars; though since the medians are all associated with slip lanes, not center medians, they may not narrow the roadway enough. The design here still privileges highway speed for cars. So it's not immediately clear this would have had a beneficial effect here preventing or mitigating a car-and-car crash.

But the overall ranking would support the MPO funding the project.

As for the other sites, it is significant that of the top 10, Lancaster Drive is in five of them.

Three of the top 10 are also on middle Commercial SE. That's another bad street for walking. The top Commercial St site and second site overall, Commercial & Royvonne, already has a project in motion.

Some of these sites have longer-range plans for widening. On the one hand, planners and engineers will say that the widening funding and moment of construction might offer the prime opportunity to add medians and improve the crosswalks.

But there is also an opportunity to say that the widening is inconsistent with our interest in walking safety, and that with our need to reduce miles traveled because of climate disruption and carbon pollution, it is more prudent not to widen.

Will this list of problematic crossing sites become useful as arguments not to widen? When will see see walking as the primary, fundamental form of mobility, and not as some secondary fringey thing we have to accommodate around our autoism?

The Public Art Commission meets on Wednesday, and last time they met they talked about the bronze reliefs on Council Chamber doors. The doors are not in ADA compliance. So the Commission is pondering what to do. It seems likely they will be relocated.
Posted by Salem Breakfast on Bikes at 8:30 AM

(Added a few more notes on the crosswalk list)

"Tomorrow's City Council meeting will feature a public hearing on the 2019-20 budget. There are at least three amendments that will be introduced before passage of the budget on June 24th: 1) I plan to move to add $50,00 to initiate work on the City's Environmental Action plan. We already have the baseline green house gas inventory; now is the time to start action to reduce Salem's negative effect on the environment; 2) a motion to restore the position of Youth Development coordinator (I may not have the exact title) to provide much needed services to our youth, services that will help them grow into productive members of our society; and 3) restore a long range planner position in the Community Development Department, a position that could help the environmental action plan on a number of levels as well as providing very important planning for out future as a city."

In additions to the Council agenda, Marine Drive is back a little. Willamette Neighborhood Housing Services writes:

"We request the City of Salem's help opening Harritt Drive south to Marine Drive and assist in the construction of Marine Drive. Part of the $3.58 million approved for Marine Drive in the 2008 Streets and Bridges bond would provide the access and construction funding to enable Neuva Luz [a 31 unit affordable housing project for farmworkers] to move forward soon."

Also added a brief note on the doors to Council Chambers and their art.