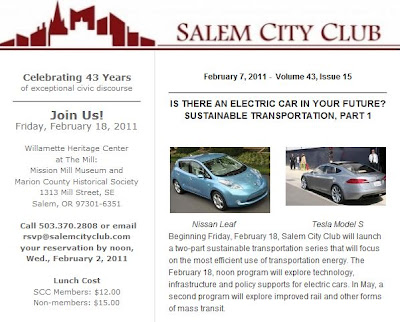 On Friday, the Salem City Club will feature "sustainable transportation," but the bike's nowhere to be seen. Even worse, the blurbage makes dubious claims about efficiency, and even the eV plug forgets about the Eneloop!

In his recent State of the Union message President Obama challenged Americans to be the first nation to have a million electric vehicles on the road by 2015. His challenge reflects the considered view of many scientists that America is on a collision path with reality regarding how we produce and use energy, including energy for transportation. It also reflects the promise and possibilities of electric vehicle technology.[bold added] 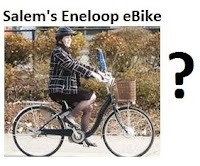 Since the focus is on electric power, where's the City's Eneloop? What about the Giant Twist Freedom, or the Raleigh, or the Trek?

How about regular, 100% human-powered bikes, the actual most efficient form of travel?

Any conversation about efficiency in "sustainable transportation" that omits the bicycle is just not very credible, unfortunately.

So if you happen to be headed to the City Club, ask about bikes and the Eneloop!
Posted by Salem Breakfast on Bikes at 7:00 AM