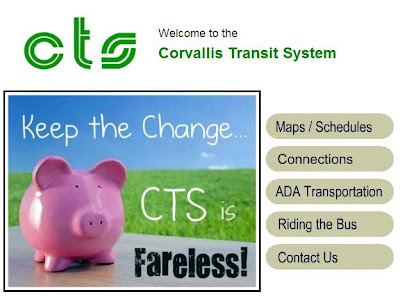 Wow. While the Salem-Keizer area struggles to support a viable bus system, and indeed may be strangling it, Corvallis just applied rocket fuel to theirs.

According to the Gazette-Times

CTS became fareless on Feb. 1 because of a Transit Operations Fee passed by the Corvallis City Council. It added $2.75 to single-family residential customers’ bill each month. The fee is one of three new Sustainability Initiatives Fees totaling $4.05 a month for most customers.

The other two fees support maintenance of sidewalks and city trees.

The fee for transit operations replaced the portion of the city’s general fund (property taxes) previously dedicated to transit, making those funds available for other uses such as the library, parks and recreation, police and fire departments. It also insulates the transit fund from possible cuts to the general fund to deal with the city’s $3.1 million revenue shortfall.

The fee was adopted by the Corvallis City Council after passing three separate council votes between September and December 2010.

While Salem takes relatively timid baby steps towards sustainability, here's a bold one. It will be interesting to see how this affects boardings and passenger miles.
Posted by Salem Breakfast on Bikes at 7:00 AM

Cherriots has the worst of all worlds now, with a pitiably low firebox recovery percentage, plus all the administrative hassles and accounting costs of collecting fares. You almost couldn't design a better system for crippling transit than the fare.

But they did finally join the world of the google! From a press release:

"Cherriots route and schedule information is now available on the Google Transit trip planner. This trip planner allows customers to plan their bus trips using the familiar Google Maps interface. Even first time riders, who have never used the bus, can easily plan their trips on Cherriots using Google Transit.

I hope they can pull it back together. The greater Salem area needs strong transit.