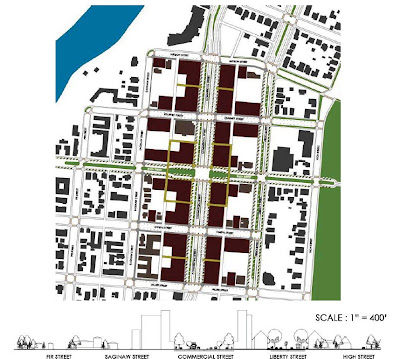 In today's Statesman, Beth Casper continues her terrific series on the Sustainable Cities Initiative. This time she looks at the South Downtown Project.

Helpfully, she's linked to four reports - so between her article and the reports, there's lots of information. (The City's page also links to the pdfs.)

The project aimed to retain the historic character of the neighborhood while also meeting the needs for increased density and walkable commerce.

The project and proposals are highly conceptual, of course, so it's not necessarily useful to drill too closely into the details. Still, the vision for a greenway along Bush Street would offer much better connections to the river than Owens, which is narrow and very busy, and Miller, which doesn't connect directly to the park, ending at Liberty rather than High, and dead-ends with a teeny-tiny connection to the two-way sidepath on River Road.

Restoring two-way traffic on roads continues to resonate in various projects around the city, and perhaps we'll get to see further momentum behind this. Merchants understand that the two-way traffic increases eye-balls on storefronts! Two-way is safer and better for business.
Posted by Salem Breakfast on Bikes at 1:01 PM