It's a complicated issue with lots of variables and values.

School siting and boundaries are important ingredients, however, in making it possible for kids to walk, bike, or skateboard to school. And we know that active kids learn better.

At the same time, because of terrain - the hills and flats - housing costs, and other factors, geography intersects with demographics in important ways, and this sometimes complicates school equity.

The proposal would split West Salem at Glen Creek Road, sending kids south of it to Walker, and north of it to the new Straub Middle School. 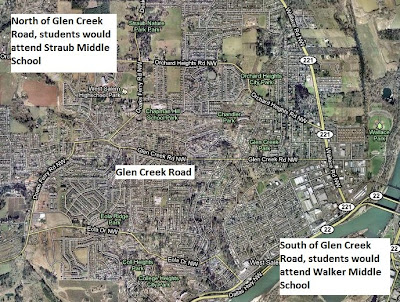 Several parents urged the Salem-Keizer School Board to carefully consider the proposed West Salem school boundaries Tuesday night, particularly because it might concentrate the poorest students at one middle school.

The recommendation deviates from the district's typical feeder system, in which all students from certain elementary schools feed into a specific middle school. Instead it would use a geographic approach that draws a line down Glen Creek Road NW with the south side attending Walker and the north side attending Straub.

An important reason for the geographic approach was best to preserve neighborhood schools.

In a brief post it's not possible even to approach a quality analysis. But it's easy to say: If you live in West Salem, have kids, and value active transportation, get involved!
Posted by Salem Breakfast on Bikes at 7:00 AM

How come im going to walker middle school and my brother and sisters are gping to kalipuia??! We live in the same house?(: