But the schedule's a hard master, and while Ducks football merits rescheduling Council for the next day, the holiday for love does not. (Is this how jaded we all are about Valentine's Day?)

At Council are a few transportation related items - a request to fund a downtown circulation study and an interesting note about needing money for bridge planning. 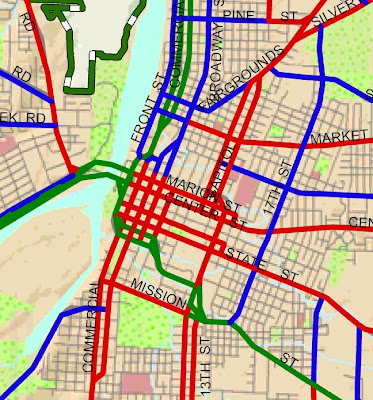 On the Urban Renewal Agency agenda is a request for $180K to fund a Central Salem Circulation, Access, and Mobility Study. This arises out of the 2009 TGM grant applications (here and here) as well as the Sustainable Cities circulation study. The request also includes $40K from Public Works contingency funds (a separate item on the City Council agenda).

The study is expected to recommend and evaluate the costs, benefits, and impacts of alternatives and solutions on traffic circulation (transit, freight, vehicle), efficiency and throughput; operations (signalization, speed, turning movements); on-street parking; mobility and safety for all modes (including bicycle and pedestrian), and order of magnitude cost....One of the first tasks identified in the scope of work is to complete a data collection exercise which would result in traffic count and turning movement information for a series of intersections inside the Riverfront Downtown URA and outside the boundary of the district.

Interestingly, the public works request for $40K also includes a note that it will fund bike counts! Though it appears the counts will be semi-automated using existing video cameras.

Also on the agenda is an interesting sale: Two strips, currently used for parking, in the so-called Windows on the West parcels would be sold from Urban Renewal to the City proper. There must be more to this transaction! 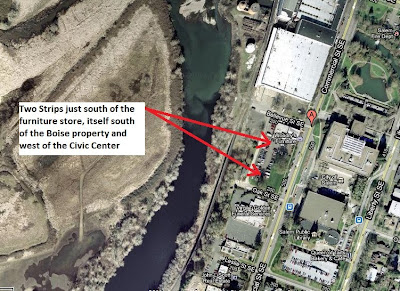 There's also a request for $200K to fund a North Downtown Housing Investment Strategy. This could help the district north of the Union St. Railroad Bridge. (At the same time, hopefully it will generate development that will be more successful than the first round of downtown condos, which are clearly overpriced for Salem.)

Finally, on the agenda is adoption of the Downtown Downtown Action Plan (104pp). We'll have to revisit this later in more detail.

Turning now to the City Council agenda, perhaps the most interesting note is for Federal lobbying priorities during the National League of Cities Conference to be held March 12 - 15, 2011:

The Columbia Rivercrossing megabridge has already burned up over $100 million; ODOT just axed its chief manager, Richard Brandman; and multiple review panels have faulted the process and design.

By contrast, the Sellwood Bridge replacement is right-sized and moving along (pictured above, at right).

Salem would do well to study these examples. It will be interesting to see whether earmarks or other funding sources will appear for these.

(From Daniel Patrick Moynihan's memo in the Nixon Administration.)
Posted by Salem Breakfast on Bikes at 12:01 PM