Now things are cooking! One bill has passed a chamber, and a few more have been introduced.

The most interesting new development may be the proposal to tighten up distracted driving laws and to eliminate the loophole permits people to use a mobile device while on the job. While enforcing the existing law does not seem currently to be a priority for law enforcement, expanding it cannot hurt. Still, an expansion will rouse opposition.

Senate Bill 660 would decrease the "penalty for failure to stop for stop sign to maximum fine of $40 for person operating bicycle."

House Bill 3178 looks like it would encourage transit-oriented development to be funded by tax-increment financing. It would permit

Maybe someone who knows more about TIF and land use can chime in? 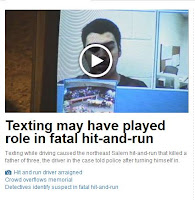 House Bill 3186, co-sponsored by Representative Berger, would expand the texting and cel phone ban and would remove the "exception for person operating motor vehicle in scope of person’s employment from offense of operating motor vehicle while using mobile communication device." It will be interesting to see how this plays out.

Senate Bill 130 for bicycle traffic lights. Passed the Senate 28-1, and is now in the House.

House Bill 2331 to study bicycle licensing. Referred to Ways and Means. No action.

Doug, who knows as much as anyone about recent interest to license bike riders, offers a trenchant analysis of why people who bike should favor the study and not escalate opposition or rhetoric against it.

House Bill 2332 would create a weight-based schedule of traffic fines. Vehicles that do less damage, like bikes, would be fined less. Referred to Judiciary. No action.

House Bill 2602, the headphone ban. As noted last week, it was not on the committee agenda. Later reports confirm it was pulled. It appears dead now.

Proposed Oregon Constitutional Amendment to permit gas taxes to be used for pollution control and congestion reduction. Referred to Revenue Committee. No action.
Posted by Salem Breakfast on Bikes at 7:00 AM

Email ThisBlogThis!Share to TwitterShare to FacebookShare to Pinterest
Labels: Legislation

Thanks for covering the Byzantine world of the legislature. I am especially interested in seeing more teeth in a distracted driving law. It is just as dangerous as drunk driving in my opinion, and should be treated with similar disdain.

Portland Transport offers this commentary and analysis on transit-oriented development and HB 3178.