Tomorrow night the Planning Commission will hold a worksession on Bike and Walk Salem.

The meeting will be at 5:30 in Council Chambers. At the meeting, City staff and advocates do not expect the Planning Commission to take public testimony. This is a question-and-answer session with a view towards crafting a plan subset that has realistic prospects for funding and construction in the next few years - and then a priority list for something like a decade and the next bond measure.

If you'd like to support bikes, please do come to the meeting - just be aware that there won't be an opportunity to address the commission. But a good crowd in the audience always helps! Plus, they're still taking written comment. If you haven't used the comment form, don't forget to let the City know biking is important to you! 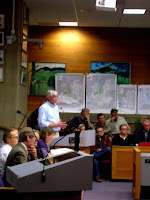 Doug Parrow has led much of the thinking and analysis of the plan, and he's drafted a proposal on a stripped-down core for immediate action:

The most concentrated bicycle traffic in Salem is found adjacent to the downtown area. Yet many riders are intimidated on the downtown streets and banned from riding on the sidewalks. Family friendly bikeways on which motorists and bicyclists could comfortably share the road would provide facilities that cyclists of all capabilities could use. A network of family friend streets downtown would set the city on a path to meeting one of the most requested needs--a system of connected facilities accessible to all cyclists....

The city should focus its initial efforts at implementation of the bike/ped plan downtown by using current design standards to make the following streets family friendly bikeways:

Painting sharrows on Chemeketa St represented a modest step forward in providing for safe use of downtown streets by bicyclists, the city can and needs to do more. We need not look to Portland for examples of projects that improve the walkability and bikeability of our streets. With relatively minor measures, Fargo, North Dakota dramatically improved Broadway in its downtown area to make it safer, more attractive place for people. If Fargo can do it, Salem can do it.

Here's part of a brochure from Fargo, and sponsored in part by the downtown merchant association, that talks about biking downtown: 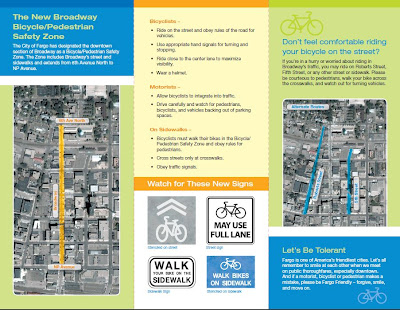 Look for more after the meeting.
Posted by Salem Breakfast on Bikes at 3:00 PM

Doug's Transportation Ramblings said...
This comment has been removed by the author.
December 5, 2011 at 4:55 PM

Eric, The Fargo brochure is a great find. I am aware of what Fargo has done by having walked and biked there. With only a little effort, they have made Broadway much friendlier to pedestrians and bicyclists and the businesses are thriving. I'm not sure I compared Salem to Fargo as much as I suggested that we do not have to look to the cities of the "left coast" to find places where pedestrians and bicyclists are accommodated. Even conservative Fargonians recognize the value of these types of improvements. Isn't it about time that Salemites do?

PS. I found a type in my original comment.