Prospects for Bike Lanes on Brown Road to Improve

In Sunday's paper, reporter Chris Hagan and assistant traffic engineer for the City Tony Martin talked about what all is involved in building sidewalks. One of the examples Martin talks about is Brown Road.

It so happens that Brown Road is a project slated for design funding at some point in the next few years.

You may recall from mid-November the flashing beacon on Silverton Road and the question about how it might relate to neighborhood north-south mobility. 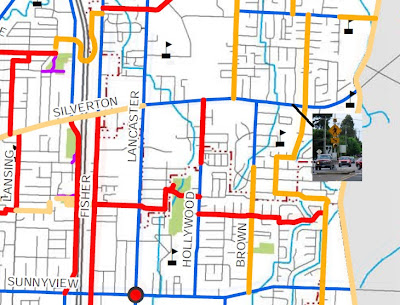 At the meeting they included a basket for design funding in the new 2012-17 Transportation Improvement Program.

I say "basket" because as I understand it, including it in the Program list doesn't mean it's necessarily funded. It just means that it's officially on the docket to be available for Federal funding and is a project "for which funding is reasonably anticipated." If projects aren't on the list, they can't get funded.

The SKATS Transportation Improvement Program (TIP) authorizes the allocation of federal, state, and matching local funds for transportation activities and improvements within the SKATS area boundary...The TIP represents the formal programming mechanism by which funds are committed to specific transportation projects by the affected jurisdictions in the SKATS MPO area.

In the basket the committee put three projects:

The projects were assembled from the Transportation Enhancement list from a year or more ago. You can see the evolution of the list here, here, and here.

Two of the three projects are remediation: The addition of basic sidewalks and bike lanes to mid-century roads built in what was unincorporated county land (and subject to fewer development standards). They may not conform to the Bike Plan priorities, either.

Brown Road is a tier 2 project, Wheatland Road is outside the bike plan's project boundaries, and the Minto path is a tier 1 project.

In fact, as part of the committee's deliberations (and of the technical committee that feeds recommendations to the policy committee), there doesn't appear to have been discussion of the Bike Plan. It is not yet a datapoint for discussion. (Minto was already a priority for Salem City Council, apart from the Bike Plan.) Hopefully after the plan's adoption it will have an immediate and more powerful effect on project planning and selection.

Public support will also encourage electeds and planners to plan and construct a larger proportion of projects for people who walk and bike.
Posted by Salem Breakfast on Bikes at 12:01 PM

According to the draft October Bike Walk Salem Plan, Map 9 shows Brown Road as a Tier 1 project. Hayesville Drive and Brush College Rd were also considered for funding, and both of those are Tier 1 in the draft plan.

Ah-ha! Since this is a bike blog, map 19, the map of bike projects, is the main one of interest, and it shows Brown as Tier 2, a short section of Hayesville as Tier 2, and Brush College as Tier 2 (on map 22).

As you point out, Map 9, the map of sidewalk projects, shows Brown and Hayesville as Tier 1, map 12 shows Brush College also as Tier 1.

So this is an example where both a personal/bloggy focus on one mode, and the systemic/analytical focus on single modes in the separate chapters of the plan (what I've been calling "sort-and-separate" thinking), leads to inconsistent assessments.

Thanks for pointing this out.

Eric - The description of the "basket" ("It just means that it's officially on the docket to be available for Federal funding and is a project "for which funding is reasonably anticipated.") is not correct.

What the Policy Committee decided was to put funding for design of two projects (Brown Road; Wheatland Road) in the draft 12-17 TIP. That TIP is now out for public review. Should those two project be retained in the final 12-17 TIP, Marion County and Keizer will have funds they can spend for designing these two bike lane and sidewalk projects. This will make them more competitive for applying for other funding (next round of TE or Flex Funds) for constructing the projects, or using their own local funds for construction.

Also, the Policy Committee did not include federal funds for the Minto Park path. Funds from the Riverfront Downtown Urban Renewal Area budget for preliminary engineering of the bridge between Riverfront and Minto parks was added to the draft TIP; no federal funds are being used or proposed at this time.

Ah! Thank you. The clarification and correction is quite helpful.